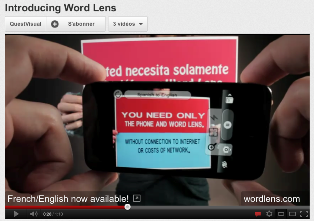 When Otavio Good sees the word “salida” in a Spanish-speaking country, he thinks of “salad” instead of “exit.” To avoid the embarrassment that can result from mistakes like this, the Mountain View developer created WordLens, a smartphone app that instantly translates texts, from signposts to menus, with a simple camera view.

Right now the app can translate English, French and Spanish, with German, Italian and Portuguese coming soon. Chinese and Arabic versions are also in the works. Designed for tourists, the app translates texts without using wi-fi – roaming would cost a fortune – and generates translations from a pre-installed dictionary. Built for the iPhone, it will soon be available on Android devices.

The app is so fast you’d think it was magic. This is exactly how it was described by Daniel Glazman, who introduced it at Nexplorateur Forum,  held March 15th and 16th at the UNESCO Palace in Paris. The app was voted one of the 10 best global apps of the year.

Irritated by people (journalists heading the list) who ask him when he got the idea for the app, Good spoke instead of the innovation process. “There isn’t an aha moment,” he said. So there’s no story to tell, unfortunately. In this he agrees with Steven Johnson, whom he tells me he’s never read.

Shakespearean conclusion: there is method in his magic.

In terms of innovation, magic is only in the end result, and doesn’t happen every time. Everything leading there is a result of a rigorous method.

It’s up to us to whether we think that’s a good thing, but don’t tell me it’s not a good formula.