I was joking when I said that The Economist,The New York Times and Foreign Policy were following Winch 5’s trail, celebrating innovation coming from regions beyond those normally covered. I also found a lot of useful things in the articles. The most important, no doubt, being that that it is the nature of the web, internet and ITC themselves that contribute to the fact that the ability to innovate is increasingly available to anyone?) 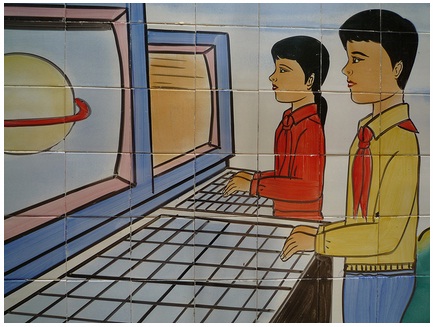 No one says this more clearly and concisely than Joi Ito, the director of MIT MediaLab

He believes that the internet is less a technology than it is a philosophy of “the effectiveness of decentralized, bottom-up innovation.” It’s built on the fact that everyone has the right to go online and to innovate without having to ask permission (I’m looking at you, Apple). “This network was intended to be decentralized, its assets widely distributed. Today most innovation springs from small groups at its ‘edges.'”

If you add, as he does, that costs are lowering – notably due to open source software – it quickly becomes clear how and why innovation is being democratized, why it is no longer the privilege of a few hyper-developed regions. And anyone can do it, since education is no longer “about centralized instruction anymore; rather, it is the process establishing oneself in a broad network of distributed creativity.”

This is exactly what I noticed in Africa.

As far as China, I’ll defer to Kai-Fu Lee, a former Google China representative who now heads an incubator there.

After reminding readers that 600,000 engineers graduate from Chinese universities every year, he admits that companies in his country began by copying the American giants, but that they “focused on their customers and developed their products, adding more and more local innovations.”

This is how QQ, which began as an imitation of Yahoo and Microsoft’s instant-messaging services, became “a very different product — a combination of instant messaging, social networking, universal ID and gaming center.” The result: “QQ has built the world’s largest online community (about 700 million active accounts), while its American counterparts continue to build instant messaging as loss leaders.”

The power of these two examples, which calls into question Silicon Valley’s dominance, shows the growing role of the largest countries, and the emergence of creativity networks that are open to everyone, networks in which innovators and entrepreneurs offer millions of new users something other than what’s created in Menlo Park and Mountain View.

The Capgemini Research Institute report “5G in Industrial Operations” revealed that 75% of...

AI 4 Education – How can AI help to ensure sustainability in education?

Despite the effort in the field of education towards a sustainable future and the progress in...

AI 4 Education – How can AI help to ensure sustainability in education?
Show all