Pricing is a complex process which involves distance, customer profile, embedded services, infrastructure fees and yield management rules. There are also some special factors such as calendar events and special offers which may have an impact on pricing.
There is a last special factor which is the organizational factor within the national rail market and which involves several instances, such as the government, the regulatory body, the infrastructure manager and the carrier, which may influence the final operational costs.

Comparing them is possible if we can eliminate some of these factors :

Now let’s take 4 countries: France, Germany, Spain and Italy and let’s find out trips that match with these constraints.

Selected routes are all high speed lines under 90 minutes long and they all start from a capital city (except for Milan which can be considered as an economical capital city) to a major town in the country. By this way, we think we eliminated the attractiveness factor.

Departure date is fixed to the 25th January 2012. We requested prices for a morning time departure and also for the afternoon and an evening time on the early of December 2011.

To make the comparison, we use this figures to calculate the booking price per kilometer: 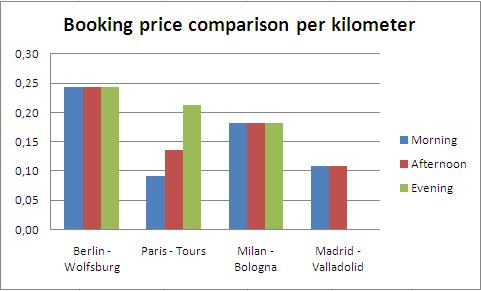 This chart leads to make 2 observations.

1. Fares do not depend on the departure time except for the French route

The reason is that Yield management rules still apply on this route despite the precautions we have taken above. In fact, this route is strategic for the French railway because it carries many commuters who daily take the high speed train to go from home to work. Consequently, attractiveness is very high on this route and French railway is able to apply high fares which remain competitive respecfully with the other travel modes.

Consequently, in a market which going to be more and more opened and liberalized, organizational factors keeps being an impediment to have real fares competition.