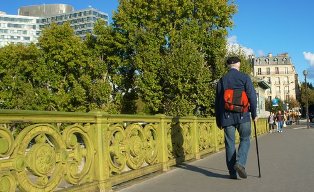 Facts first: I just had an emergency operation on my Achilles tendon, for the second time in six months. It hasn’t been a serious problem, but it is rather disabling. Since the first operation wasn’t successful, I had to accept that a second was necessary. Doctors recommended that it be done as quickly as possible, as there was risk of rupture.

I had to cancel plans that would have seen me leave Sunday for Belgrade, and then on to Bayreuth and Istanbul.

The next steps: during the recovery period I’ll continue to blog and publish articles. I still have a lot of material from Africa. I’ll do several Skype interviews and I’ll cover news on innovation, change, and social media in the regions that I have already visited and am going to visit.

I think I’ll start my travels again in January, but I’m still not able to say exactly when. I’ll keep you updated, for sure.

What I saw in Mexico and Africa has convinced me of this mission’s validity. Innovation is happening around the world, and it contributes to the changes we’re tracking. I’m fascinated by the richness of things I’m seeing emerge, and by the people that I’m meeting. I’m as determined today to continue my travels as I was eager in September to begin them. The eagerness is even greater today.

The blog continues, and soon I’ll recommence the journey that will take me through Europe, the Middle East, Asia, Oceania, and South America, as planned.

A warm welcome at reception as a customer fills in their personal details is a great starting...

Cloud economics : How to get full value from the cloud

The changing operating model leads to a long-term structural transformation of IT spending.

Cloud economics : How to get full value from the cloud
Cybersecurity