Earth’s richest 1% own half the world’s wealth. To be more specific, 36 million people (0.7%) control $128.7tn (45.9%) of global wealth according to reports released by Credit Suisse[1]. These are the effective ‘whales’ of world wealth.

The enormous gulf that exists between the uber-wealthy and, well, the rest of the planet should be cause for concern. Urs Rohner, Credit Suisse’s chairman, coined the phrase ‘millennial disadvantage’ where only a very small minority of high achievers in the upcoming workforce will ever be able to breach the wealth divide[2]. These disadvantages include high unemployment, tighter mortgage rules, increased income inequality and reduced pensions.

Blockchain the great and powerful

Blockchain has been hailed as the great equalizer. It has the ability to decentralize power, wealth and resources across hugely diverse groups of participants. It can provide means to the poor and the unbanked to engage in global economics, facilitate instantaneous exchanges of value and revolutionize how we handle all kinds of assets.

But first, let’s talk about Bitcoin. It’s estimated that around 1,000 users hold approximately 40% of bitcoin in circulation. Yes, these ‘whales’ hold 40% of an estimated $114bn asset class.

Just like any other traditional asset class, large individual holders (or investment groups) can and do, collude to manipulate the price. Given the speculative nature of cryptocurrencies (and its infancy), it should come as little surprise that whenever a whale makes a large move, the rest of the ocean feels the effects.

Some economists suggest that game theory will support coin value despite whales hoarding large amounts. The basic principle is whales that own large amounts of bitcoin don’t want to destroy the value of their investment by moving the market. If one whale moves, they might liquidate some of their assets before the other whales and smaller fish catch on and start dragging everything down. The situation has become more complex since the advent of margin trading, short positions, options etc.

Having said that, in practice large Bitcoin (BTC) orders are usually done privately and behind closed doors to ensure the little fish don’t get worried.

In any event, there is a serious grey area around market manipulation in the cryptocurrency space. Putting aside the divergence of law between jurisdictions, it is also fundamentally unclear where crypto market manipulation will fall within global regulatory frameworks. As bitcoin is a ‘digital currency’ and not necessarily a security (depending what country you’re in), the prohibitions on certain trading activities become even less clear.

First, let’s chat about some of the methods whales use to manipulate crypto markets.

This one is relatively straightforward and just requires a large amount of money. The basic premise is the less volume a particular market has, the easier it is to manipulate based on perceived selling pressure. This method also doesn’t involve communicating with the broader community.

Easy money, right? Unfortunately, it’s likely illegal. In the US, the Department of Justice (DOJ) and Commodity Futures Trading Commission (CTFC) are currently running an investigation into these activities. 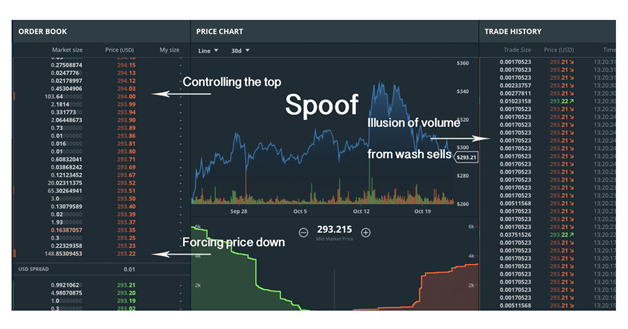 This is a hot topic in the community. A number of large exchanges are suspected of engaging in large-scale wash trading to increase coin value (and consequently their books). The basic idea behind wash trading is executing ‘fake’ trades that appear to be legitimate to the untrained eye but are actually traders buying/selling coins against their own account.

Traders will execute buy and sell orders against themselves to create the perception of heightened market activity to boost confidence amongst other traders. This creates the appearance of liquidity and demand.

Bitfinex is a large ‘successful’ crypto exchange that came under intense scrutiny earlier this year after allegations arose of their own trade engine permitting trades against the same account. Ordinarily, any other traditional exchange has explicit prohibitions against self-trades. While the Bitfinex Terms of Service contain a prohibition, the actual trade engine used on their platform provided the capability to execute self-trades resulting in situations where people successfully wash traded tens of millions of dollars in crypto-assets. For a more detailed examination of the Bitfinex saga, take a read of the following Medium article.

The ramifications of wash trading extend beyond just coin price manipulation. Bitfinex went on to value their company of their earnings, which primarily came from trading volumes. The net result was an (arguably) completely arbitrary and artificial valuation based on wash trading activity.

Yes, this is also illegal and starts trickling into the realms of outright fraud.

Layering is very similar to spoofing. Traders place various orders at key price points throughout the order book to give the appearance of reserving key positions prior to the market shifting. Naturally, traders have no intention of actually executing those trades. While some of these orders will be kept, 80-90% of these orders will be cancelled just before the price point breaks creating a falsified view of market demand and shifting coin price.

This method is a common one in the crypto community. Again, it involves whales utilizing smaller fish to execute trades to manipulate price.

Traders will elect an altcoin (usually a relatively unknown coin with a small market cap) to be the target for the ‘pump’. Traders coordinate large groups of other investors through fake news, false promotions and reaching out to retail investors through social media. Driven by the media storm that’s been created, the community starts buying up large amounts of the coin rapidly driving up price.

Once the price is high enough, traders then start ‘dumping’ by selling their altcoins off at the higher price. Given the low liquidity of altcoins, the effects of the dump are usually instantaneous, and the price can plummet within a matter of seconds. There is typically a lot of slippage in the pump and dump process and many traders are left holding worthless coins they bought on the way up.

A bear raid is the opposite of a pump and dump. Manipulators spread fake news to drive the price of a coin down. As the price reaches all-time lows, the traders then start buying up large amounts of the coin.

In traditional financial markets, pump and dumps and bear raids are usually considered to be a form of securities fraud.

Market manipulation utilized for the sole purpose of driving up coin value at the expense of retail traders is abuse of the market. Capitalizing on retail traders degrades confidence and support for crypto as an asset class and as a wealth distributor (or equalizer if you subscribe to some of the blue sky thinking around crypto economics).

Although, having said all this there might be an argument for what I call ‘coin value management’. In my last article I explored token economics and some of the principles underpinning coin value in ecosystems that have a utility token. In situations where coins serve a functional purpose, such as providing access to goods and services or participating in governance, there might be a more philanthropic reason to maintain coin price.

These types of token ecosystems rely on co-creation of value. Shareholders do not govern the way forward for token businesses, instead it is game theory and mutual efforts to grow token value. If the price of a utility token increases, the founders (as token creators) win and the users (as primary token holders) win.

The issue lies in timing. It takes time to build an ecosystem. It takes coordinated efforts to code in rules, to iterate platforms, to market products and to scale the project. While all this is being done, a token price can and usually will fall. Utility tokens also end up on secondary exchanges increasing their exposure to the hype and speculative rollercoaster that is crypto trading.

So, do we turn a blind eye to shifty activities if they’re done for the greater good of the ecosystem? If coin value bottoms out before platforms can be deployed and an ecosystem can start growing, then the functional utility of that token will die with the project. Sure, there might be some winners and losers along the way, but once the ecosystem reaches critical mass then everyone’s a winner… at least in theory.

I suppose what it comes down to is a project that is perceived to be successful is far more likely to actually be successful.