This article describes what a Dutch auction is, what valid reasons are for deploying this method and what  technical setup it takes to make it work

Some of the best auction graphs will only have a single dot; this solitary bid on the graph demonstrates a previously unknown opportunity in a flawlessly executed Dutch Negotiation.  This article may be a point of review for many readers as reverse Dutch auction functionality is a common feature on almost all eSourcing software; however among all the sourcing consulting professionals I’ve met over the last few years I have not met another who has leveraged Dutch negotiations.

The concept is simple and most I’d spoken to about the subject know and understand the Dutch negotiation setup and can recite that the auction opens with a price the buyer is looking for a seller to accept, the buyer’s offer continues to rise in value until the first seller accepts which will conclude the negotiation, thus one dot on the auction graph.

Why use a Dutch negotiation instead of Reverse Auction?  The biggest reasons for running a Dutch auction are because of weak competition, tight timelines, or a need for greater control.  Dutch is ideal when there aren’t many suppliers bidding for the good or service or there is a large preliminary bid price gap between 1st and 2nd place.  Event timelines operate with greater predictability as events can be complete in 25 minutes in a worst case scenario, for these reasons noted Dutch auctions have become a personal preference.  This preference towards Dutch auction is also based on the savings results that compare well to reverse auctions.  Ideally sourcing organizations should use the Dutch event type frequently to avoid developing a predictable reputation with the supply base (suppliers will learn a company’s tendencies to use Dutch only when competition is weak).

Please see the attached graphs, graph #1 is a perfectly executed reverse auction where there is a lot of rank change happening between multiple suppliers; when rank is the motivator for bidding you want the ranks of the suppliers to change a lot to keep them bidding the prices down.  The best way to help predict whether a reverse auction will be competitive w/ multiple bids is to review the preliminary bids submitted in the RFP to determine whether each suppliers’ weighted TCO bids are within 3%- 6% of each others.  …The bigger the price gap between suppliers the bigger the chance is that suppliers’ ranks won’t change in a reverse auction.  When suppliers’ ranks don’t change the suppliers get discouraged that their bids don’t result in a better ranking.  This tight competition is needed to succeed or your 1st place supplier has a chance of winning an auction w/o having to place a bid, which would be the worst possible outcome. 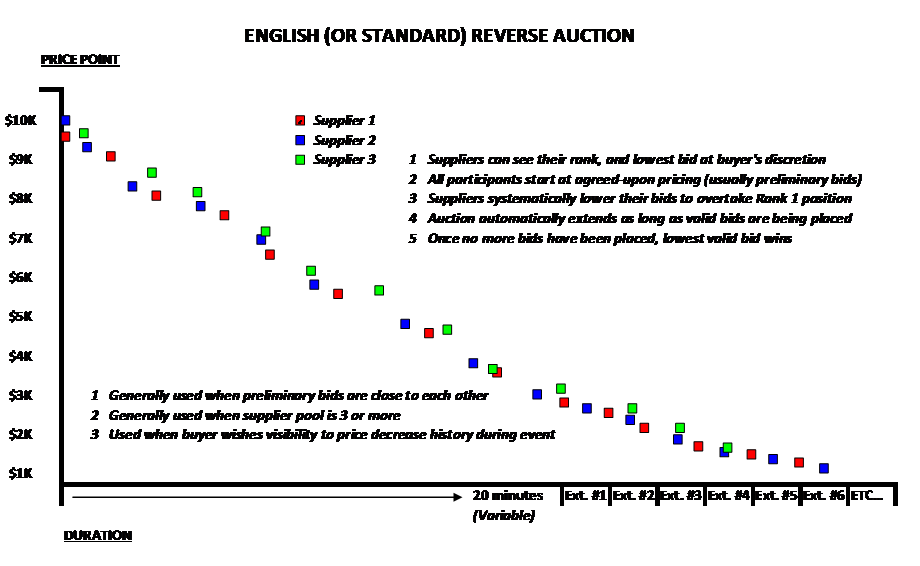 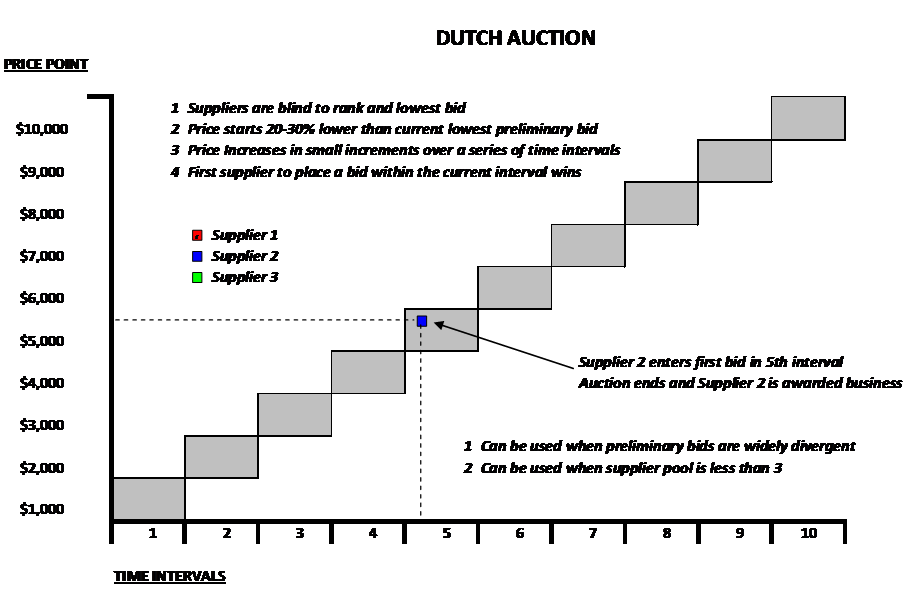 Graph #2 on first glance is not interesting, but consider what the dot represents and the conditions that were created to motivate the supplier to place that bid.  When determining which auction setup is best buyers need to improve the odds of leveraging a competitive force to drive pricing lower. If preliminary bids come in and there is a 6% or greater gap between 1st and 2nd place a buyer can’t guarantee there will be competitive feedback for the 2nd place supplier in the negotiation (i.e. 2nd place supplier will not be able to lower its price enough to overtake 1st place).  The Dutch negotiation works because there is no feedback.  Suppliers who give very good proposals during the RFP don’t want to risk losing the sale and will often jump at a lower price proposal to ensure that no one else will take the offer.  Let’s review a true example that happened last fall:

Supplier A is an incumbent print service provider who hasn’t had the best service record with the client, none the less this supplier owned distinct advantages over its competitors because it already owns the required printer heads, has been setup in the client’s eProcurement system, and offers extended payment terms; despite these advantages after the RFP their price was still 15% higher than the leading proposal (even after all the TCO and weighting adders and multipliers were placed on the non incumbent suppliers).   Supplier Bid =$100 transformed into $102.50

Supplier B is a non incumbent in this printing area but is a current supplier for the client for other printing services.  With startup costs, and client’s weighting feedback included this supplier was in first place with an aggressive proposal.  Supplier Bid =$80 transformed into $87.00

Supplier C is a non incumbent who offered a solid proposal but was not considered a front runner compared to other more competitive offers.  Supplier Bid = $93 transformed into $102.00

The Dutch negotiation parameters were setup as following:

*With the Dutch auction and any other auction type they are most successful when the process has been transparent to the suppliers, true awarding of business is based on auction results, all factors are included in each suppliers proposal, and that the auction is the final step of the evaluation process (lab testing, contract signing, insurance requirements, payment terms, etc have all been buttoned down with each of the processes’ remaining suppliers).

Creating More Value within Your Supply Base

Christian Bercz
Creating More Value within Your Supply Base
Sourcing