Following the oil crisis in the 70s, France made nuclear power the long-term strategic choice for its electricity supply. Consequently, in a quarter of a century, the French nuclear industry developed its nuclear fleet – the world’s second largest – which is operated safely and competitively by EDF. Nowadays, this industry provides 220,000 jobs in France, which are distributed over 2,600 SMEs. The nuclear industry is a sector of excellence, with jobs that are twice as qualified as the average in the French industry.

Furthermore, French nuclear power represents a benchmark worldwide. On the one hand, it spans the entire lifecycle of nuclear power generation facilities –from new nuclear engineering, operation of the installed base, to decommissioning – and on the other hand, all fuel-related activities. Thus, France maintains the spectrum of expertise on its own territory. This is undeniably a proven competitive advantage that has allowed France to conquer markets internationally, with SMEs in the sector exporting five to ten times more than the average French industry, particularly to China.

In Asia, nuclear energy is developing in a sustainable way. In response to growing electricity demand and in order to avoid using fossil fuels for electricity generation, notably to reduce air pollution and GHG emissions, several countries committed to the development of civil nuclear energy. Forty years ago, Japan was the sole country in Asia to use nuclear power. Following the Fukushima Daiichi accident in 2011, the share of nuclear power in the Japanese energy mix dropped sharply.

Nevertheless, the proportion of electricity generated by nuclear plants in Asia has doubled over the last thirty years. In South Korea, India, and China in particular, the nuclear industry is experiencing an unprecedented boom. China is rapidly developing its nuclear industry in line with its twelfth and thirteenth five-year plans (which, among others, aim at promoting GHG-free energies and reducing China’s high dependence on coal). This requires mastering industrial and engineering processes. 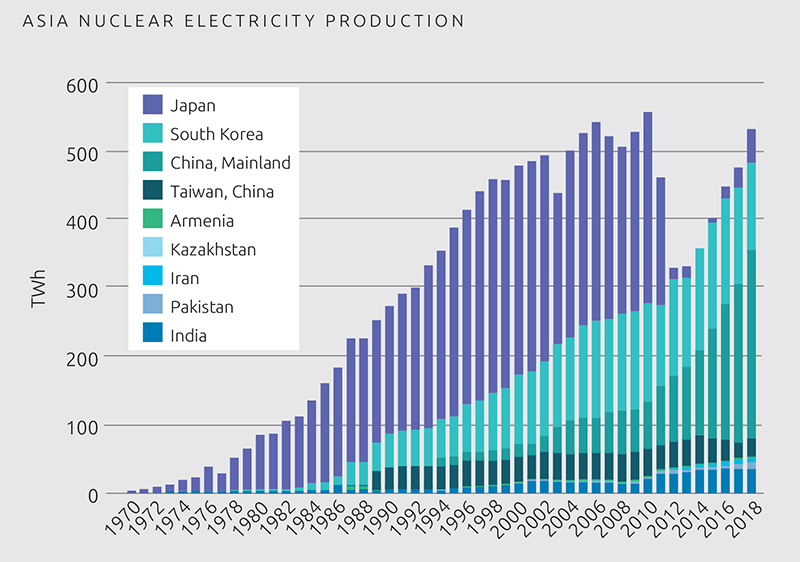 Just as France benefited from Westinghouse patent in the 70s, China relies on foreign partnerships to speed up its development. That said, the country has also built a third generation “Hualong” plant that will be soon commissioned. This approach is driven both by economic and industrial safety considerations. France and China began cooperating on the construction of nuclear reactors and on technological knowledge transfer in 1983. The first plant was set up at Daya Bay and was financially supported by Hong Kong. In 2018, China was the first country to commission a third generation EPR at Taishan, which was followed by Taishan. This proves the relevance of French EPR design. By promoting the export of French technologies, standards and solutions, France benefits from return of experience and generates business volumes that are important for its industry. 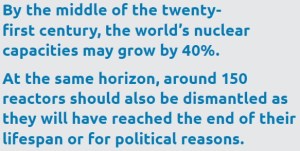 China will likely drive new nuclear growth while the western world and Russia will face dismantlement and waste management challenges, since they have the oldest reactors.

Even if it is impossible to predict just how quickly China will carry out the largest nuclear program in history, in the coming 20 years 70% of new reactors in the world are expected to be built by China. The size of this program will naturally lead to gradual design optimization and lower construction costs, promoting the deployment of Chinese nuclear power sales around the world. It is these same features that made France a successful builder and an exporter of nuclear plants in the 1980s. Driven by this industrial dynamism, China could become a dominant player for next-generation reactors construction.

France’s industrial footprint is deep enough to allow it to remain a reference player of this growth under the leadership of EDF, (the world’s largest nuclear operator), with Framatome (which has built 120 French technology reactors around the world and acts as a service provider for over 50% of world’s reactors), and Orano (which holds strong market positions internationally – the top three in the world for its fuel cycle businesses: mining, chemical enrichment, recycling, and with over 50% of its revenue generated abroad). France already stands out thanks to its international partnerships, involving all companies in the field, notably with the UK, the US, Russia, Japan, and China. Thus, in the UK, France and China are cooperating in the construction of two French EPR reactors at Hinkley Point, and two at Sizewell. EDF is also taking part in the certification of the two Chinese reactors in Bradwell, the first Chinese Hualong-type reactors to be built in a western country. Cooperation between France and China could be further enhanced if the plan to replicate the French fuel reprocessing plant at La Hague were to be finalized and signed.

The major difficulties encountered at the Flamanville EPR, resulting in over a ten year delay and almost four times higher costs than initially estimated, require urgent and substantial actions. Jean-Martin Folz’s report, requested by EDF management, identifies the root causes of these poor results.  These include the loss of skills in many fields and lack of quality control on the value chain, including suppliers. Also worth mentioning are complex relations with the French Safety Authorities (ASN), and regulatory changes, which introduced new requirements during the construction. Under these circumstances, EDF launched the “Excell” program to improve the quality of its own activities and those of its suppliers’ and recruited the program leader from the automotive industry.

We recommend urgently rebuilding a top-quality nuclear industry, restoring trusted relationships with suppliers and with ASN and insuring the availability of key resources, notably by recruiting and training them. In order to benefit from the acquired experience, we suggest retaining EPR for future French reactors, but simplifying its design and standardizing its components in order to make these reactors more easily constructible – knowing that the initial investment represents 80% of the cost of electricity. France should also accelerate the development of an industrial small and medium-sized reactors offer, which would represent a carbonfree alternative for many utilities or countries that do not have a adequate grid to connect large generation units and/ or to ability to finance the large investment needed by the construction of over 1,000MW-capacity reactors.

For a new nuclear construction program to succeed in France, all the players in the sector should be aligned under the leadership of EDF (as approved by the government) and share a common goal. EDF should also be able to finance these new reactors, which is currently very difficult. Beyond potential capital increases, we call for the implementation of a new nuclear regulation, allowing the visibility on the nuclear plants’ future revenues, providing easier access to financing. The British “Cost for Difference” regulation, implemented for all carbon-free, renewable, and nuclear electricity production, enabled the UK to relaunch its nuclear program. Let’s hope that the present discussions around the reform of the existing nuclear pricing system (AREHN) will provide this visibility and make financing possible.

To review the full findings from the 22nd edition World Energy Energy Markets Observatory, download a copy of the report today. Download Now

In pursuit of a “better normal”

Flipping the Smart Grid switch before the lights go out

Watch our on demand webinar to learn about the current industry challenges and flexible...

Flipping the Smart Grid switch before the lights go out
energy

Energy and geopolitics are strongly intertwined

This trend of de-globalization has been amplified by the COVID-19 crisis.

Energy and geopolitics are strongly intertwined
Show all