Stijn Broecke is a senior economist at the OECD, where he leads the organization’s Future of Work initiative. He holds a PhD in Economics from the University of London and has over 15 years’ experience working in government (Mozambique and UK) and international organizations (African Development Bank and OECD).

Veerle Miranda is a senior economist in the Social Policy division of the Directorate of Employment, Labour and Social Affairs at the OECD. She holds a PhD in Economics from the Catholic University of Leuven (Belgium) and a Master of Advanced Studies in International Economic Policy Research from the Kiel Institute for World Economics in Germany. She leads the work on youth policies at the OECD, and has written extensively on a wide range of social, employment, and education policy issues.

Alternatively, download the discussion to the right, or scroll down to read on.

“The future is already here – it’s just not very evenly distributed” is a widely cited quote attributed to the American-Canadian speculative fiction writer William Gibson. While there are many ways of interpreting Gibson’s quote, it seems very apt to describe the impact that ongoing labor market trends are already having on different socio-economic groups.

Technological progress, population ageing, and globalization are among the key drivers behind changes in the labor market. For example:

Together, these trends determine the availability and nature of jobs, as well as the skills that are demanded in these jobs. Some of these changes are gradual and play out over a period of decades, while others are significant and happen in the space of just a few years.

The OECD Employment Outlook 2019 showed that labor markets in OECD countries are already undergoing substantial transformation. In other words (or, rather, in Gibson’s words): the future is already here.

And there is a lot of good news in these trends. For example, the share of high-skilled jobs in OECD countries has grown by 25% over the past two decades and this trend is expected to continue. Demand has increased for human resource administrators and IT support technicians, while it has dropped in manufacturing. There is also little reason to fear a jobless future. Indeed, while technology may destroy some jobs, it also creates many more and, often, these are better jobs. This has been the case with previous technological revolutions, and there is little reason to believe that this time will be different. On average, across OECD countries, the employment rate had risen from 65.5% in 2000 to 68.8% in 2019 – the highest it had been over the last 20 years (see Figure 1). 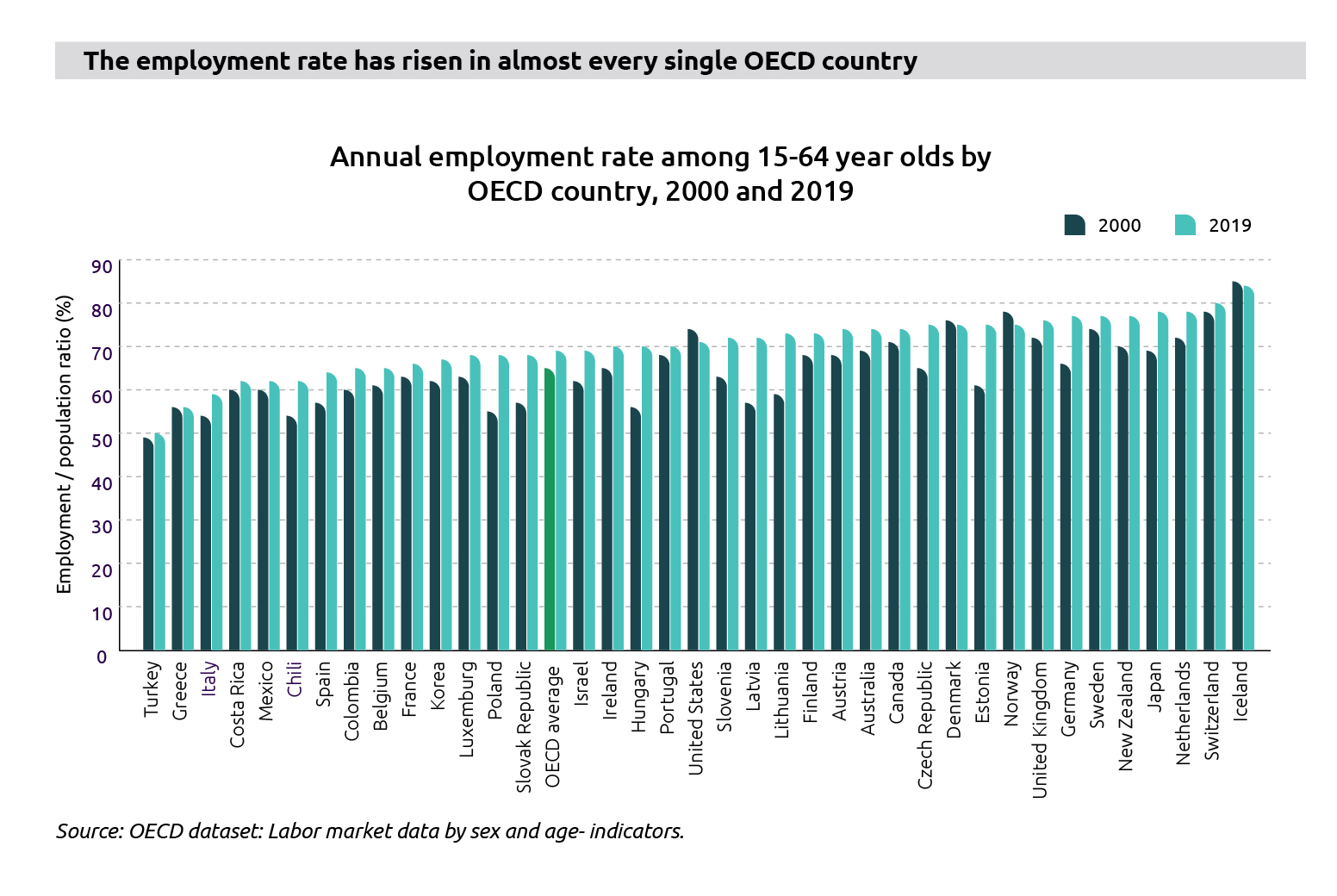 However, there are significant risks on the horizon as well. In particular, the OECD Employment Outlook 2019 highlighted rising inequalities and labor market disparities as one of the greatest challenges facing OECD countries in coming years. The risk of automation is highest for the low-skilled workers and so the risk of job displacement is the highest for these workers, yet low-skilled adults are, on average, 40 percentage points less likely than high-skilled adults to participate in training. In recent years, low-skilled workers have faced increased risks of low-paid employment and have witnessed a rise in underemployment. These disparities can manifest themselves in differential access to work opportunities, but also in differences in the quality of those jobs. Moreover, regional inequalities are likely to rise further as new jobs are created in regions other than those where jobs are lost.

While the future of work brings many new opportunities, there are also signs that some groups are less well equipped to take advantage of them, while often they are also the same groups most exposed to the risks. One of these groups are young people and, in particular low-skilled young people.

The OECD has estimated that, on average, 15% of jobs are at high risk of automation in OECD countries. For young people, however, this risk is as high as 23%, as entry-level jobs tend to have a high share of routine, non-cognitive tasks, which can be more easily automated.

With the disappearance of some of these entry-level jobs, young people today are facing a very different labor market from young people starting work one or two decades ago. The OECD Employment Outlook 2020 presented evidence that a larger share of labor market adjustments happened through young people entering different types of jobs than through older workers being displaced.

So, it is really important that education systems are responsive to these shifts in the labor market and ensure that young people are well-prepared with the skills required by employers. One way to achieve this is by building more bridges between the world of education and the world of work, for example through more work-based learning (such as the apprenticeships system in Germany) and the involvement of social partners in the design of curricula.

At the same time, there have been concerns around the quality of some of the new jobs emerging. For example, young people are more likely to work in the gig economy, where social protection, pay, and regulations are often lower than in other sectors of the economy. While the gig economy may still present a relatively small share of overall employment, it has been growing fast. Other types of non-standard contracts with lower protection are frequently used to hire young people – for instance, temporary contracts account for more than half of all contracts for young people in several OECD countries – and unpaid internships are on the rise.

The 2008 global financial crisis took a large toll on young people. It took a decade for employment and other labor market outcomes to return to pre-crisis levels (see Figure 2), leaving important scars on young people’s careers. Such long-term effects operate through two channels. For those who are unable to find employment upon labor-market entry, spells in unemployment and, particularly, in inactivity can weigh upon their future employment and earnings prospects. But even those who do find a job can suffer long-lasting disadvantage if they are forced to accept lower-level starting positions, if their mobility is compromised by more limited vacancies, or if they are less able to access training and promotion opportunities. 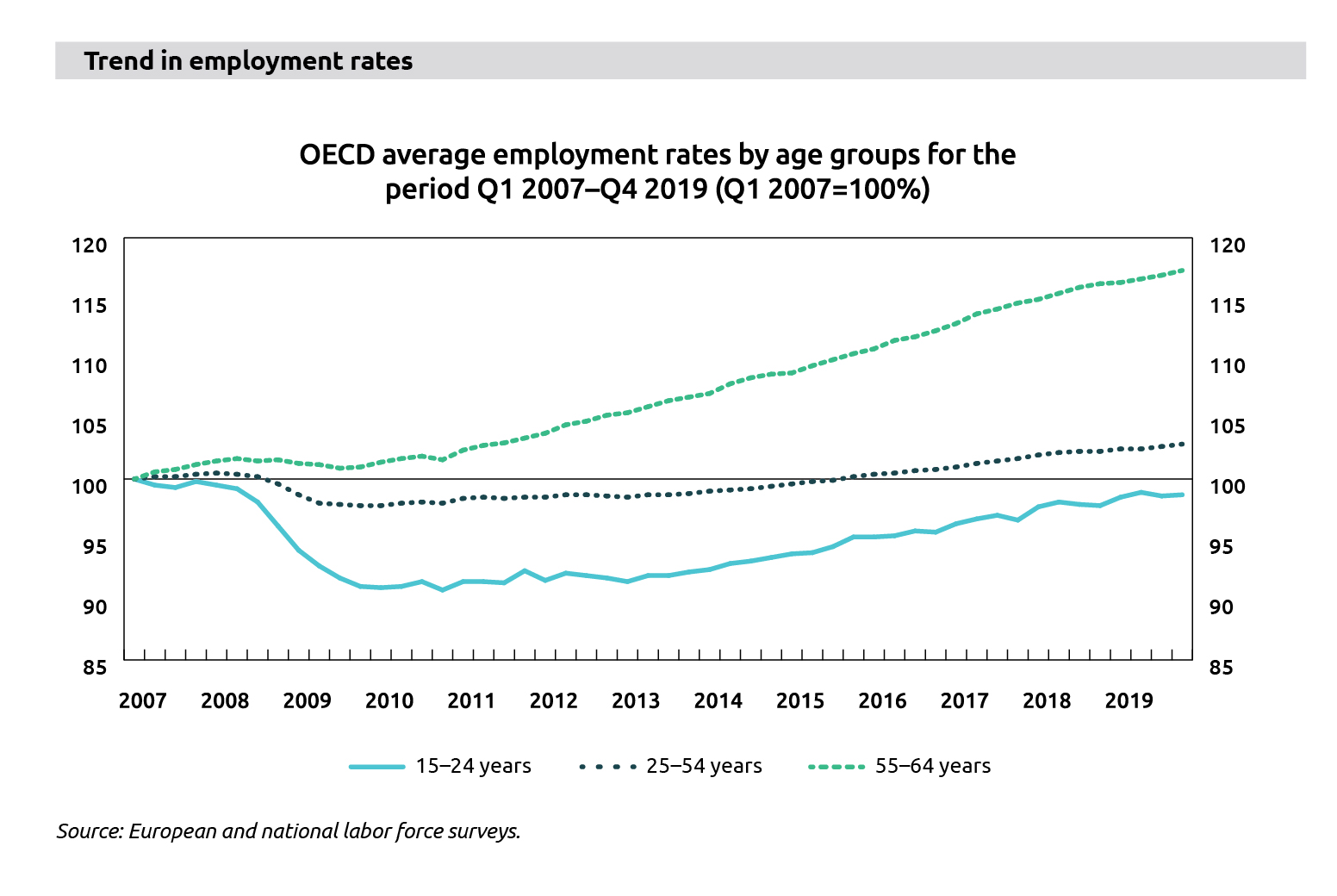 Sadly, the COVID-19 crisis has reversed the decade-long decline in unemployment rates and compounded existing challenges. Many young people worked in sectors most affected by lockdowns and physical distancing measures, notably in hospitality, entertainment, and non-food retail. As they tend to have accrued fewer firm-specific skills and less experience, young people are, as the last in, often the first out.

It is therefore not surprising that youth unemployment surged during the pandemic – reaching 14% among 15–29 year olds in the OECD at the end of 2020 (see Figure 3), compared with 6.9% for the total working-age population. The impact of the crisis on unemployment was twice as strong for young people as for the total population and by the end of 2020, 23.4 million young people were unemployed in the OECD. In addition, hours worked by young people had fallen by 26% year on year in the second quarter of 2020 (11 percentage points more than for prime-aged and older workers), and the return of hours worked to pre-crisis levels has been much slower among young people. By the end of 2020, the share of young people who are neither employed, nor in education or training (NEETs) stood at 12% among 15–29 year olds in OECD countries, representing a 2.9 million increase in the number of young NEETs compared to one year before. 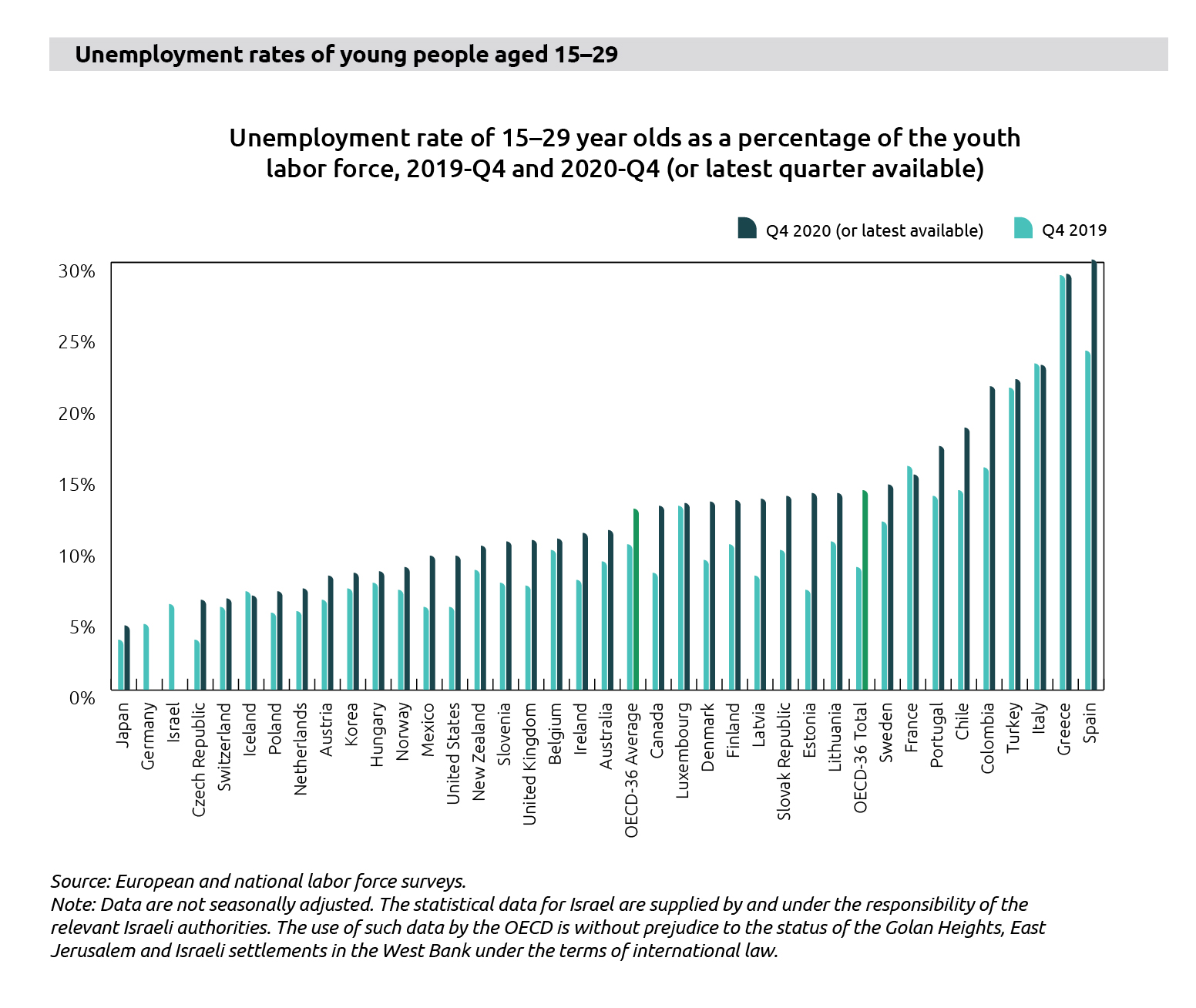 Note: Data are not seasonally adjusted. The statistical data for Israel are supplied by and under the responsibility of the relevant Israeli authorities. The use of such data by the OECD is without prejudice to the status of the Golan Heights, East Jerusalem and Israeli settlements in the West Bank under the terms of international law.

As we outline in our 2021 update to the OECD Youth Action Plan, to avoid the same mistakes of the global financial crisis, OECD countries must develop a corpus of measures to protect these young careers, by:

Early action is indeed the best way to prevent long-term damage and the fiscal costs of the required interventions are small in comparison to the benefits that accumulate over the rest of young people’s lives. For many young people, the impact of the crisis will only be temporary, but many others will need extra help.

We need to ensure that the opportunities that the future of work offers are, to put it in William Gibson’s terms, more equally distributed.

<< Return to the overview of Conversations for Tomorrow Edition 2

Browse other articles in this edition

Ensuring a global and local people response to the pandemic

Preparing the aviation workforce for the skills of tomorrow

Leading with authenticity through the pandemic

Balancing the risks and rewards of new ways of working

Accelerating the pace of decision-making with remote working

Peter Cappelli, Professor of Management at The Wharton School, University of Pennsylvania

Peter Cappelli, Professor of Management at The Wharton School, University of Pennsylvania

How hybrid is changing the experience of work

Jailbreak the degree: upskilling is the currency of the future of work

The leadership imperative: moving to a trust-based work culture

Everything has changed, and AI is ready to take us on the ride of our working lives

The Future of Work – summary

From remote to hybrid

The Future of Work – summary