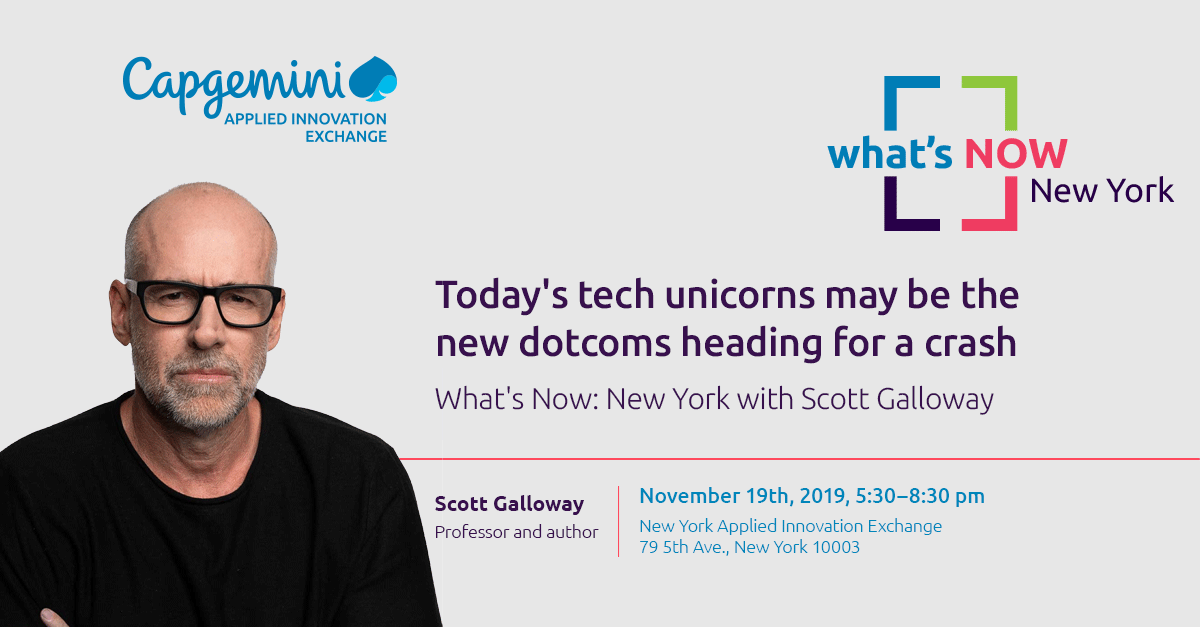 Will the year 2020 be another 2000 for tech investors who seem to have forgotten the lessons of the great dotcom crash of just 20 years ago? Scott Galloway feels the way investors are treating tech unicorns gearing up for IPOs today is eerily similar to how they treated dotcom companies in 1999. The renowned business professor and serial entrepreneur of three successful startup companies lived through that last collapse and is worried that many investors have forgotten. Galloway will refresh the memories of veterans and lay out the case for anyone younger than 45 in our next event at What’s Now: New York.

Galloway points out the parallels between valuation of high-profile tech companies in 2019 and 1999. He says it starts with the “yoga-babble” language the firms use to explain what they do. Now it’s “disrupt” whatever industry, back then it was “change the world.” However, the companies often don’t carry out business basics of building off profit margins and providing clear value. Galloway says roughly one in four public companies that went through recent IPOs are profitable, which is similar to the ratio in 1999. In 2009, after investors had survived a couple stock corrections, only one in 10 companies going through IPOs were not profitable. Finally, in both 1999 and 2019, critics who challenged the high valuations (like Galloway today) were told they simply did not get it.

Galloway is certainly worth hearing out. He is the author of the bestselling book “The Four: The Hidden DNA of Amazon, Apple, Facebook, and Google“. This book came out in 2017 well ahead of what became the tech backlash. We expect our conversation with Scott will roam into what governments may or should do to deal with the problems emerging from these dominant tech platforms. We also expect to have other folks from the tech and investor fields in the room who might have other perspectives to add to what will be a lively conversation.

Register for the event

Thank you for registering for the event. We will get in touch with you shortly.