The Consumer Goods Technology Survey on Trade Promotion for 2018 sponsored by Capgemini has 47% of the respondents blaming empty shelves during promotions on poor in-store stocking practices. That does not bear out practically, because we know that the retail supply chain from the distribution center to the store stockroom has significant issues as well. But data on tracking of inventory from the DC to the store, although existing within most of the retailers’ point-of-sale information goes widely missed by CPG suppliers and, therefore, creates a huge hole in the intelligence necessary to predict and take relevant action to prevent OOS conditions.

Once a product leaves the manufacturer’s last ownership location – the warehouse – it’s gone,  out of view and below the radar of supply chain tracking. While there may be good data for in-transit inventory from the manufacturer’s warehouse to the distribution center or store, once it is received and unloaded, the lights go out for the supplier. From that point forward, it’s a mystery. And that should not be.

Retailers have the data, and many, if not most of them track this within their supply chain system that shows up in their internal database that can be included within the POS data feeds, if requested. The increasing number of retailers that include or can include this inventory tracking data within a POS feed to the manufacturer can and should create a new wave of intelligence that ties the entire history and tracking of the item into one continuous stream. For those CPG companies that either pay for or otherwise freely receive POS data directly from the retailers, there should now be a concerted effort to request their inventory data along with the traditional checkout data that comprises the typical POS upload.

This action benefits both the retailer and the supplier. It never ceases to amaze me that in this time of focus on advanced data science applied to promotion planning, we are still dealing with an outdated system of weekly reporting, most of which can be latent, and baselines that ignore the shelf. OK, sure, some companies are experimenting with store inventory measurement along with their corporate supply chain metrics, but until the demand is strong enough to make retailer inventory data a standard component of the POS data content, we will continue to see out-of-stock conditions prevalent throughout the global marketplace. 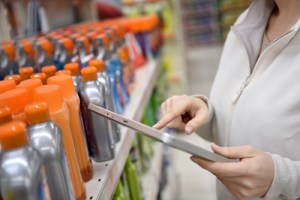 At the recent Oracle Modern Customer Experience conference, I spoke with one operations executive for one of the nation’s largest retail grocery chains. He assured me that, while new ways of working together would always be top of mind for his roadmap, he too was frustrated with the lack of real accurate and trustworthy data that drives promotion planning – both for the trade and consumer direct marketing. He had a lot to say about POS data.  “I’ve asked my suppliers time and again to consider including our inventory tracking as part of their POS data feeds,” he told me. This is a major retail chain that charges for their POS data feeds, making them available on a daily basis, if desired. “We do sell access to our POS, but once the deal is done and our suppliers are receiving the data, it is really a no-brainer to include not only inventory tracking, but assortment, category and warehousing data we have as well.”

Being able to track retailer inventory throughout their system would enable two solutions to the out-of-stock problem.

First, being able to see the inventory flow of all of the manufacturer’s products from the distribution center down to the individual store stockroom would provide a near real-time picture of the status and enable action to be taken if inventory levels began to dwindle days before a promotion is scheduled to begin. With the right kind of thresholds and triggers built into the order management systems, this could go a long way toward ensuring that no location is without stock for the promotion.

Second, storing this data and using it as fuel for AI and machine learning-based decisions would provide an excellent tool to predict and analyze patterns and trends that can help to better schedule shipping dates. Trade promotions typically include advanced shipping date ranges for the agreed-to product SKU’s to be included in the promotion. Often, these shipping windows range from two to three weeks ahead of the promotion, and if the deliveries are in the earlier part of that window, shopping activity could deplete the stock before the promotion actually begins, creating potential OOS conditions during the promotion. Having inventory data on a daily basis provides visibility to the pre-promotion shipping and in-store inventory status and would enable action to be taken if there was a higher than normal pre-promotion depletion of the to-be promoted product stock before the promotion begins. By no means am I stating that this is an easy fix. Rather, what I am highlighting is the simplicity of a potential solution and certainly the fallacy that we somehow cannot address and solve the out-of-stock problem that currently exists.

This issue impacts the accuracy and trust of the baselines, hence incremental lift factors as well. We may not be able to prove that the current process of baseline development coming from demand planning is wrought with errors; however, it stands to reason that unless you have all of the inventory tracking intelligence, combined with typically extrapolated or averaged POS data from syndicated providers that is not representative of actual sales at each store location, how can the baselines be accurate? If the growing trend toward compensating CPG sales reps and key account managers for POS production at retail continues, it will put more pressure on supply chain and operations management executives to demand more accuracy in baseline reporting.

The problem is that everyone plays with the same flawed scorecard. We have stated in earlier blogs that the well-established process of managing promotions using weekly time periods is, unfortunately, the norm in the consumer products world – especially in fast-moving consumer goods. The above chart depicts the flow of inventory from the supplier’s factory to the shopper’s market basket. A large portion of that history and movement of inventory is lost, unless the retailer provides it. In some cases, we know that smart suppliers that receive POS data directly from the retailer have requested and are receiving store inventory data. But the missing data in red above illustrates a huge hole in the intelligence the CPG supplier has in the visibility to a full inventory picture.

CPG companies are beginning to explore and act to shift their POS data from syndicated reporting to direct POS received from the retailer. In many cases, the suppliers are beginning to request store inventory tracking as well.  “We were amazed at the difference between what we thought existed in the individual store stockrooms and shelves and what inventory was actually on hand,” said the revenue manager for a tier one CPG supplier. “Like everyone else, we use the [syndicated provider] for our POS data and chart our promotions on their standard weekly calendars. But we saw a major delta between our numbers, projected via baseline averages, and the reality of the inventory reported by the retailer itself.” Many of the current TPM and demand planning technologies fail to include the retailers’ trade calendars which often differ from the standard provided by the syndicated data providers or the CPG supplier’s own time scale.

The murmurs among industry revenue and trade managers, demand planners and key account managers for CPG suppliers are becoming louder and more frequent. Out-of-stock problems persist, and even with the time, money, and effort spent to analyze the OOS problem, we still have it. The combined CPG industry has the technology and the data to fix this problem, and it takes both retailer and supplier to work together to find a solution to one of the most expensive and recurring problems that exists today. Several efforts to formulate new processes to address these issues have been marginally successful, yet we still operate from a 50-year-old paradigm for inventory movement tracking and POS data.

It’s time for a change.

Why AI Continues To Deliver Results In A Pandemic

Anticipate demand before it hits, instead of waiting to see what happens

With many budgets constrained, now is the time to focus on artificial intelligence projects...