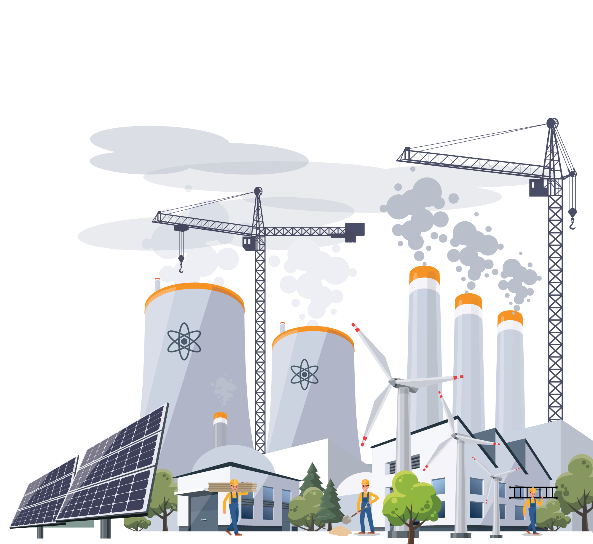 In 2016 the UK government put a stake in the ground by backing the construction of Hinkley Point C (HPC), a new £18Bn nuclear power station located on the northern Somerset coast. It is but a stone’s throw from the existing Hinkley Point A and B and equidistant from the scenic Weston-Super-Mare and Butlins Minehead.[i] The decision marked over eight years of work since the initial government go ahead and just short of the midpoint in the construction phase, with first power expected to be delivered in 2025. In total this project is going to take EDF a little shy of 20 years to construct from the initial conception. An operating life expectancy of 60 years, plus another 20 years of decommissioning, gives total lifespan of a 100 years, 60% of which the unit shall be operational. Even if the operating time is extended to 80 years this still only makes the units operational for 67% of the unit’s lifecycle.

The prize at the end of 20 years of building is a 3,200MW facility producing stable reliable energy, which equates to 1,060 large onshore (2.5–3Mw each) wind turbines or 890 offshore wind turbines  (3.6MW each)[ii] which are highly weather dependent. These numbers are further increased when we look at the uptime and efficiency of each unit: a typical nuclear power station has availability over 90%, where as a typical wind turbine is nearer 50%

The financial analysis is a much harder task to undertake due to the availability of accurate figures. In 2012, the UK government agreed a strike price of £92.50 MWh, which was inflation linked , bringing the real number closer to £107 in 2019 after inflation. If we compare this to the 2015 contract of difference to promote renewables where the average price was £103.76MWh[iii] for onshore wind, it does not look too bad. However, if we look at the progress to the round two allocation in 2017 where the average strike price for offshore wind was £62.14MWh,[iv] we start to see a dramatic drop in the cost of energy. The biggest drop occurs in the most recent round of funding (September 2019) where the strike price for the third lot landed at £40.63MWh for renewables coming online in 2025 when the HPC facility is expected to go live.

To look at economics slightly differently, the Welsh Clocaenog Forest Onshore Wind Farm has an estimated cost of £120 million in capital and the output is estimated to be a maximum of 96MW, therefore the capital cost can be assumed to be around £1.56 per watt. Compare this to the HPC £18BN and 3,200MW and the estimated capital cost is £6.25 per watt. It is, however, not that simple. The average life of a wind project is 20–25 years compared to 60–80 years for a nuclear project, therefore it would require at least three life cycles of wind to match the nuclear project, pushing the cost for capital up to £4.68 per watt, yet still only  75% of the price compared to a new nuclear plant.

Financially, to continue building new nuclear is clearly not the most advantageous approach, unless the strike price can be dramatically reduced. So why is there continued talk and optimism around the development of future new nuclear projects? To answer this question, it is important to remember that the UK  currently generates 21% of its power through nuclear reactors, with 50% of this capacity (4,241 MW) planned to shut down by 2025 unless extensions are issued by the ONR (Office for Nuclear Regulation) for the existing fleet. The HPC unit is expected to initially come online with 1,600MW in 2025 with the second reactor bringing the facility up to full capacity of 3,200 MW two years later. This means that presently there is a gap in our energy supply and demand of 2,600 MW in 2025, assuming our consumption remains level. By 2030 the gap will have widened even further as six reactors come offline, increasing the gap to 4,500 MW.  The gap from decommissioned nuclear is not the only challenge that needs to be addressed. To reduce our carbon footprint we have committed to reducing our dependence on fossil fuels, and with gas currently making up 40% (14,633MW) of our energy consumption any reductions here will also need to be compensated.

It is clear that a delicate balancing act needs to be performed as we reduce our reliance on fossil fuels and our aging nuclear fleet is retired. A straight renewable replacement approach will not work, in part due to the gap between supply and demand. However, other factors such as energy mix and generation stability need also to be considered. To put the supply and demand problem into context, it would require an additional 9,700 large onshore wind turbines to meet our current needs in 2030, which equates to approximately 45 square kilometers of land, or the area from Big Ben to Heathrow.

Nuclear power clearly provides an alternative to existing fossil fuels and, though financially the numbers do not tell a compelling story, this is eclipsed by its ability to manages the variability of the environment alternatives. Wind and solar, the two leading environmental alternatives to fossil fuels, have clearly moved in leaps and bounds in the last century and their maturity has enabled the price point to improve dramatically. However, the underlying fact is that the wind needs to blow and the skies must be clear for these sources to work efficiently – which is not the case for nuclear. Other technologies, such as wave and biomass plants, are now beginning to emerge which potentially have better efficiency and less variability. However, these technologies are not presently mature enough to stake our energy future on.

It is therefore critical that lessons are learnt from the HPC new build to ensure efficiencies can be realized in any future nuclear new builds. Nuclear clearly has a key role to play in the near future within the carefully balanced mix of energy supplies, a mix that will certainly include renewable sources. To what extent nuclear will grow hinges on the success of the current generation of new build power plants and the rate in which stable, reliable, renewable sources can be developed and commercialized.

Want to know more? Connect with me directly.

[vi] The assumption of 50% efficiency was maintained for wind and 90% for nuclear.

With start-ups attempting to simplify the supply-and demand equation, renewable energy may...

Vehicle to grid: The untapped opportunity

V2G offers new revenue potential for a string of actors on the EV value chain.

A promising outlook for renewable energy

There is a tremendous potential of leveraging digital transformation for renewables—WEMO,...

A promising outlook for renewable energy
Show all