CONNECTED CAR SERVICES: NOT A DEAL MAKER OR BREAKER

While consumers say they want connected car services, most are not willing to pay extra for them.

Connected car services (dynamic navigation systems, remote vehicle diagnostics, automatic notification of emergency resources, an apps store, and on-demand, real-time access to music and news) are no longer considered a “value added” feature that consumers are willing to pay extra to get. In fact, most say they’d prefer a “pay per use” model or services that are “included in the vehicle price.”

Getting “connected” isn’t that big a deal anymore.

While the desire for connected car services is strongest in emerging markets (41% of consumers say that they’d like them in their next car), interest overall has declined since 2015 when “connected” was seen as a potential value differentiator. In fact, only 24% of consumers now have connected car services and actually use them. Quite a few – 15% – don’t use the services they have.

That said, are drivers willing to share the data generated in a connected car? The answer is “yes” – but only under specific conditions. For example, one-third say “yes” if they receive an incentive or an extra service; another one-third say “yes” but only anonymously for research purposes.

AUTONOMOUS DRIVING: THE NEXT BIG THING

Even better, consumers are willing to pay for it: 81% of consumers say they’d open their wallets for autonomous driving features, such as advanced driver assistance systems.

Already enthused about advanced driver assistance systems, consumers are eagerly waiting for the next breakthrough: autonomous driving. The success of an OEM in this area will likely depend on its reputation for making reliable, high quality vehicles.

“Wake me when we get there.”

Consumers expect autonomous driving to increase safety, reduce the stress of driving, and free the driver to think about other things. In fact, safety is the #1 benefit consumers are willing to pay more to get. Overall, consumers from emerging markets (China, Brazil, and India) are far more positive about the benefits of autonomous than are their peers in the mature markets of Italy, France, Germany, the UK, and the US. 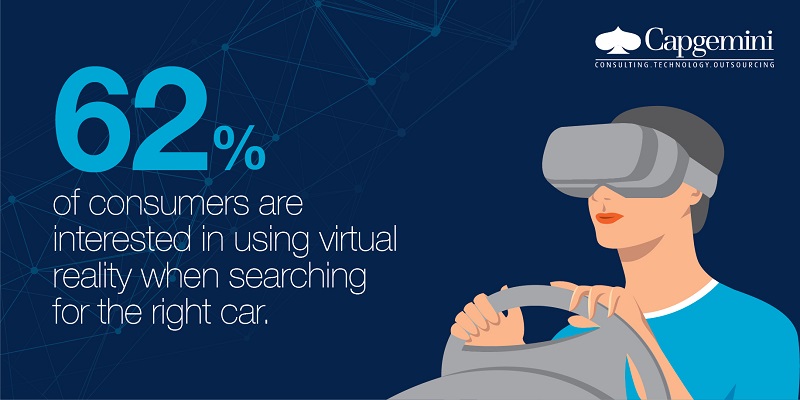 CYBERSECURITY: AN IMPACT ON THE DECISION TO BUY

Could a hacker steal the car? Could someone access and disable the car’s operating systems? Techno-savvy consumers are concerned about the cyber security of their vehicles.

As cars become more laden with technology, they become more vulnerable. So, it’s only natural that consumers would be worried about the cyber security of their cars. In fact, very few are not concerned about cyber security; nor are they opposed to surveillance.

Show and tell: Give customers information about data collection and use.

ELECTRIC VEHICLES: INTEREST, BUT NOT PASSION

Barriers to acceptance – the cars are too expensive, their range and durations are still limited, and battery charging takes too long – continue to inhibit a significant growth in sales of electric vehicles.

Register for the full report

Want to know more about what it means for OEMs and dealers to win the trust – and business – of today’s informed consumer.

Cars Online 2017 Beyond the Car