Paris, October 11, 2018 – A new report by the Capgemini Research Institute shows that less than a fifth (16%[1]) of global businesses are adopting multiple automation use cases at scale[2], and reveals that organisations are focusing on operational gains versus strategic long-term growth. Over 40% of businesses have cited that the number one objective behind automation initiatives is to improve quality, and only 23% are looking to gain incremental revenue. The report also highlights that only 32% of surveyed organisations are focusing on use cases deemed “quick wins” – those that are not only easy to implement but also highly beneficial.

The report – “Reshaping the future: Unlocking automation’s untapped value” surveyed over 700 executives from companies who are experimenting with or implementing automation solutions and analysed over 110 real-world use cases across 6 sectors. It showed that Automotive leads the way in wide-scale deployments. Of those organisations that are already implementing automation, 25% are using automation at scale in the Automotive sector, followed by Industrial Manufacturing and Retail, both at 15%.  From a country perspective, the US (26%[1]), France (21%[1]) and Germany (17%[1]) are at the forefront of adopting automation technologies at scale. (See figure below): 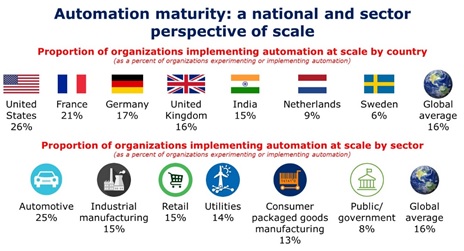 The study also highlighted that:

In contrast, over a third (36%) of organisations are focusing on “case by case” implementations in areas such as data entry or storage automation. The reports found that these deployments are not as scalable, difficult to implement and may not deliver large returns.

Ashwin Yardi, Chief Industrialisation and Automation Officer and India COO, said: “With only 16% of organisations, having implemented multiple automation use cases at scale, automation presents huge potential to drive both efficiency gains and business value. We should learn from those use cases in automation today and look to some of the ‘quick wins’ to drive uptake and return on investment.”

“Leaders need a bold vision and a clear roadmap to build momentum and bring the organisation behind them. It needs to be recognised that automation is a technology solution to business transformation, and hence both business and technology leadership should be engaged actively from day one. Automation needs to be tackled as an end-to-end strategic transformation program as opposed to a series of tactical deployments. Transformation should also be a two-way conversation, with employees encouraged to suggest automation initiatives. Combine all of this with buy-in from the executive leadership team and organisations will find automation a powerful and rewarding business enabler.” He further added.

Of the few organisations that have started using advanced technologies, such as automation and AI, as a formidable sales tool the report cites some companies that are ‘leading the way’. Examples include, Harley-Davidson who last year used artificial intelligence combined with automation to increase New York sales leads by 2,930%[3]; and L’Oréal[4] the beauty giant, who has used technologies such as voice recognition software and chatbots to enable automation in the front office as well as in customer service: it has entered the Facebook messenger chatbot space with an AI-driven gifting service in Canada. The messenger bot asks users questions about their friends and then suggests the right beauty gifts.

According to Christian Gottswinter, Head of Central Business Excellence at Siemens: “Organisations need to have a strategic roadmap for driving automation initiatives and new technology advancements, with employees as their backbone in this transformation journey. The workforce needs the confidence of their job environment to support automation and build a momentum for the change. Businesses need to foster an agile culture with open-minded people who find value in taking a digital-led approach.”

Learning from the leaders

The report looked at some of the characteristics of organisations “leading the way” with regards to large scale automation and greater than average benefits, revealing some clear traits:

The report can be downloaded here

A global leader in consulting, technology services and digital transformation, Capgemini is at the forefront of innovation to address the entire breadth of clients’ opportunities in the evolving world of cloud, digital and platforms. Building on its strong 50-year heritage and deep industry-specific expertise, Capgemini enables organisations to realise their business ambitions through an array of services from strategy to operations. Capgemini is driven by the conviction that the business value of technology comes from and through people. It is a multicultural company of 200,000 team members in over 40 countries. The Group reported 2017 global revenues of EUR 12.8 billion.

About the Capgemini Research Institute

The Capgemini Research Institute is Capgemini’s in-house think-tank on all things digital. The Institute publishes research on the impact of digital technologies on large traditional businesses. The team draws on the worldwide network of Capgemini experts and works closely with academic and technology partners. The Institute has dedicated research centers in India, the United Kingdom and the United States. It was recently ranked #1 in the world for the quality of its research by independent analysts.

[1] As a percent of organisations experimenting with or implementing automation.

[2] “At scale” is defined as implementation that go beyond pilots and test projects and are adopted at a larger scale across business units, functions or geographies.