If you’ve been paying attention, you will have noticed a rapid shift in the regulatory know-your-customer (KYC) landscape. KYC has long been a headache for senior leadership in banks. Since 2009, banks have paid £23 billion in fines as regulators become more sophisticated and the number of actions taken has increased 400%. Meanwhile, banks are spending enormous amounts of money and effort trying to prevent their ships from being sunk by regulatory fines and sanctions – with little success. The unfortunate truth is… KYC isn’t going anywhere and it’s unlikely that banks will be able to solve the problem completely.

Captain, there is a problem ahead

While I won’t attempt to solve KYC in this article, I’m going to provide my point of view on what banks can do to improve KYC functions to help banks prevent from suffering the Titanic’s fate (I suppose the FCA is the iceberg in this scenario?). 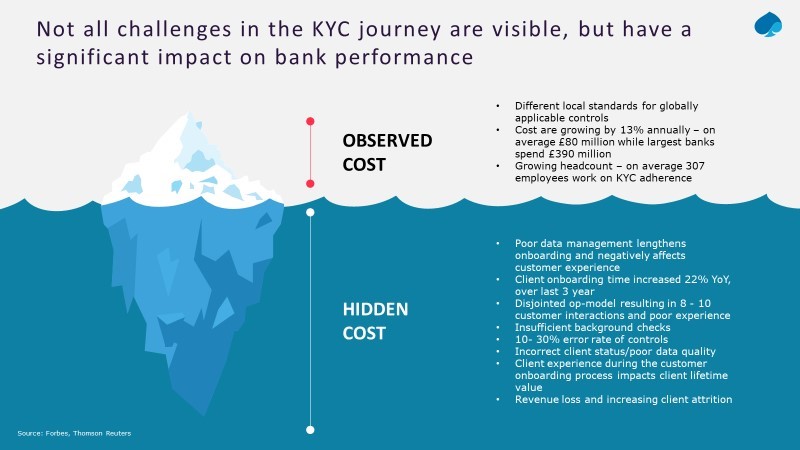 In my experience, many KYC functions suffer from six common problems that banks must address to take control of their mounting operational costs and regulatory risk exposure:

To stay on course (operationally efficient and profitable, that is), senior leaders must re-think their approach to delivering services related to KYC adherence as they are closely linked to revenue and profitability. Most banks have opted to bail water out of a sinking ship with buckets, which as you can image is high effort and little gain. I’ve recently worked with a client where we’ve taken a different approach, we fixed the holes in the ship.

Four initiatives that put you back in control:

AGILE: Adopting agile will allow banks to break down silos and take advantage of cross-functional teams that can deliver end-to-end KYC compliance. Using this model, teams structure their workload in a case backlog, and the teams collaboratively complete user stories. This minimises the need for teams to handoff cases between teams which significantly improves time to completion and cuts out unnecessary time wasted on clarifications that result from the assembly-line model.

I recently helped a major UK bank move to an agile operating model in one of its compliance functions which increased the volume of cases the team could complete by 40%.

AUTOMATION: Introducing technologies at key points in the KYC journey further improves the productivity of team by automating and removing labor-intensive manual activities. For example, by automatically generating lists of required information and documents that are collected via chatbots or client portals significantly reduces friction in the onboarding process while removing labor- intensive activities that can be completed without human intervention. Furthermore, banks can automate the authenticity verification of documents and automatically digitise the information into machine-readable formats which will improve data quality and enable automated checking.

UK challenger bank Tide, uses chatbots and automated regulatory checks during the onboarding journey. Fifty-three percent of customers opened their accounts in under 10 minutes, 70% in under 60 minutes, and 81% within 48 hours.

ADVANCED ANALYTICS: Taking advantage of advanced tooling to analyse, visualise, and monitor data will help banks not only to drive efficiency but also create consistency and resilience within processes. For example, using scripted KYC analysis in R or Python allows banks to combine more data sources to determine a customer’s KYC status and auditability of the approach taken to determine the status which reduces risk. Analytical tools also enable organisations to put rigorous quality assurance and governance processes in place to ensure mistakes are identified and remediated.

PROCESS STANDARDISATION: A key enabler for an effective KYC function is clearly defined and standardised KYC processes that can adapt to local markets and products. Organisations must be able to govern processes at a group level while allowing markets to adapt. By implementing an assurance framework that a set of controls that govern and track process effectiveness.

In another example, we helped a major bank to implement an assurance framework to identify when teams were not following standardised processes, which enabled senior leadership to take swift action.

Sail safe and stay clear of large obstacles in the water.