Recently, I caught up with Richard Thompson, PMO Manager and co-chair of OUTfront UK, our network for LGBT+ employees and allies, a community committed to fostering a supportive and safe environment at work and beyond. As Stonewall’s 2018 ‘LGBT in Britain: Work Report‘ found, 35% of LGBT people in any workplace have hidden their sexual orientation or gender identity at work because they were afraid of discrimination; there is more to do in all workplaces to foster LGBT+ inclusion.

As an ally, I’m proud to be network co-chair with Richard, and over the last few years the network has tripled in size, support and sponsorship, along with being recognised as a Stonewall Top 100 Employer in 2018 and 2019 – Richard provided some more detail on recent OUTfront activity. 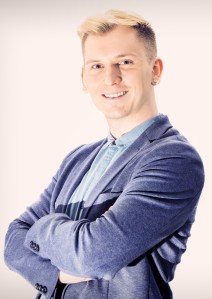 In our Stonewall Workplace Equality Index submission for 2019 we were recognised as being strong performers in “recruiting and supporting diverse network group membership.” Our work in this area stood out amongst other submissions and we were delighted to be invited to speak about the subject at the 2019 Stonewall London Workplace Conference. If you’ve never been to a Stonewall conference before – go! It’s a brilliant day of thought-provoking views, practical ideas and personal stories.

The panel I was on focussed on a challenge that a lot of LGBT+ networks struggle with: to get active participation and representation from Trans, Bi and other identities, which means they are often dominated by gay men and lesbians. However, OUTfront UK has an active and visible Trans membership, and a Bi- role model who have shared their story in articles and appeared as presenters at events such as our Pride Talks to raise awareness. 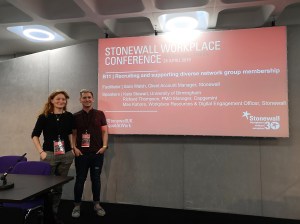 The panel also featured reps from Stonewall and the University of Birmingham, and the discussion was attended by over 200 people. I talked about how we embed inclusion into the structure of our network using the four Cs; Career, Culture, Client and Community. Each pillar has a representative who is considered a subject matter expert, to consult on multiple identities (Lesbian, Gay man, Trans, Bi, etc). This helps us to avoid volunteer fatigue and allows people to work to their strengths. For us, it’s also important that allies are fully involved in the network, actively volunteering and often being our most eloquent and powerful ambassadors. It’s part of our Active Inclusion ethos.

Speaking at the conference was a really good experience and a great opportunity to showcase the positive environment that we have created. I was also able to gain some new contacts that will allow us to build on future initiatives and share our ideas as we continue our journey on conscious (and unconscious) LGBT+ inclusion. 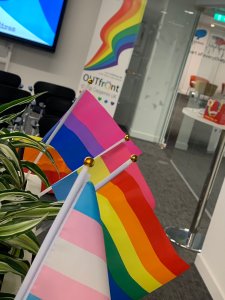 Following the success of our LGBT+ & Allies conference in 2017, in June 2019 OUTfront held (both face to face and virtually) its second annual series of Pride Talks, examining three different topics (“Gender as a construct”, “Why Allies matter” and “Views from our leaders”) with the support and expertise of GIRES and Stonewall. With 120+ attendees, including clients, across the sessions throughout the UK, the day was a resounding success, with great feedback for all sessions:S

Other OUTfront activity this Pride season and beyond:

As a scrum master there is more to the role than running the ceremonies as the move from...

Capgemini recognised with Silver Award for commitment to Armed Forces

The Armed Forces Covenant has recognised Capgemini’s commitment to veterans and...

Day in the Life: Working for a Public Sector Client during Covid-19

For every management consultant, the year, the week and the day is always different. The...

Day in the Life: Working for a Public Sector Client during Covid-19
Show all