In this post I outline what RIIO-2 has in store and why evolution alone will not be enough for network companies, particularly electricity Transmission Owners (TOs), to prosper in the future.

RIIO (Revenue=Incentives+Innovation+Outputs), introduced in 2013, was designed to encourage network companies to put consumers at the very heart of what they did, and to help ensure that the monopoly companies were not able to reap unfair returns. The RIIO-T1 sub-framework is used by the three on-shore providers of transmission services (TOs) – National Grid, Scottish Power and Scottish Hydro Electricity – and when analysing these companies’ performance, the results can be split into two categories: cost and customer.

The Rate on Regulatory Equity (RoRE) is the financial return achieved by shareholders and helps us understand the performance of network companies under the price control. It is expressed as a percentage of equity in the business, and the baseline set out for TOs at the start of T-1 was 7%. Across the sector, the current eight-year RoRE forecast has actually hit 9.49%, meaning that shareholders have brought home unexpected profits – money that could have been passed on to the consumer. All of this is despite a backdrop of record low interest rates to service debt and relatively low industry risk. 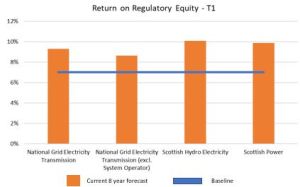 When it comes to output measures, it is a rosier picture for the consumer. Ofgem publishes each TO’s performance against six measures annually, and, in the intervening years since the framework commenced, there have been only two instances of underperformance against customer satisfaction targets. This compares to ten instances of the target being either met or outperformed. Energy not supplied is an area of further outperformance, with zero instances of non-compliance. When it comes to delivering new connections to the network, only 4 out of 1452 were not delivered on time. And it’s a similar story across the other measures.

The upshot of this is that to the end of the 2016/17 reporting period, cumulative over-performance against the output measures had yielded a net £117m for the three TOs since the commencement of T-1.

What we know is that Ofgem will look to push companies harder in RIIO-2. Targets are going to get tougher, and, although this will not come as a surprise to the TOs, it should reinforce the notion that evolution alone will not be enough for continued success.

The major headline is that Ofgem has proposed reducing RoRE from its current 7% to a range between 3-5%, saving consumers an estimated £15 to £25 per year. Consequently, network companies can expect to see a reduction in their profit margins as they will not be able to benefit from the current low cost of debt to the same degree as they did in the first price control.

Furthermore, it is safe to assume that targets set out in TOs’ special licence conditions against customer satisfaction will be increased. It’s clear that Ofgem wants to further empower customers and stakeholders, and while the TOs’ have consistently outperformed their targets, the wider Utilities sector still lags behind most other industries within the UK. According to the Institute of Customer Service, the Utilities sector performance as a whole stagnated last year and is ranked 11th out of the 13 different sectors measured, with only the Transport and Telecommunications & Media sectors scoring worse.

One of the other standout features was the proposal that the current eight-year framework is to be reduced to five in RIIO-2. It’s undeniably apparent that the Energy sector is in the midst of a period of unprecedented change. Renewable generation is increasing at a faster rate than many anticipated, battery storage is a topic occupying many minds, and the uptake of electric vehicles is appealing more and more to the British motorist. And these examples are just the tip of the iceberg in terms of sector disruptors. Due to this pace of change, it is extremely difficult for anyone, Ofgem included, to see far into the future and put in place a robust, future proof price control framework that delivers value to the consumer while concurrently provides TOs with a fair playing field in which to operate.

How can TOs position themselves for success?

As the TOs mobilise their internal project teams and move into the preparatory phase, there are several initiatives that they should look to adopt in order to ensure they are in the best possible shape heading into T-2.

Ofgem has stressed that they would like to see innovation become BAU within energy companies. TOs must push this agenda hard during the negotiation phase to allow them to invest and shift current operating practices. Providing that the right incentives are laid out, fundamental to future prosperity will be the successful adoption of digital technologies that can be used to unlock huge efficiencies and provide world class customer service. For example:

Technology is the key enabler, but the implementation of innovative tools alone will not be enough. Enterprise-wide digital transformation requires change from leadership right through to shop floor and field force. Arming users with the right skills and taking them on the transformation journey will be critical to ensuring successful transition from the current state to the digital future. Processes will need to be configured in a way to fully capitalise on the technology. Without this, digital initiatives may net some initial, mild returns but they will eventually fail and cause frustration to customers, staff and ultimately be felt by the shareholder. 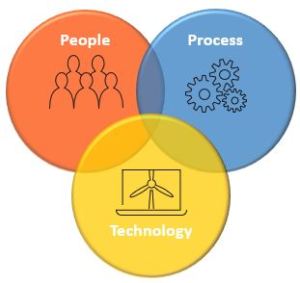 For an industry that is traditionally relatively slow-moving, the shift to a five-year price control period is one that may test boundaries. Transitioning from tried and tested waterfall deliveries to more agile techniques will be essential to iteratively deliver projects that provide value in the shortest possible timescales. Amongst the biggest challenges will be the associated cultural shift to change the ‘clockspeed’ within the organisation. Operating models will also need to come under scrutiny. Does the existing structure deliver optimum value or does it carry inefficiencies? Embedding a notion of operational excellence amongst all levels will help keep a sustained focus on outputs and the customer, and will ensure that waste is continually challenged.

How will TOs face up to the challenge of T-2?

It’s clear that for TOs, sticking with the status quo simply isn’t an option. The transition to T-2 should be seen as both a threat and an opportunity, and steps must be taken now in order to position for success and to continue to be fruitful. With unprecedented levels of disruption within the industry, continuing to provide customer and shareholder satisfaction, while simultaneously moving to a new regulatory framework will be a delicate balancing act. The key to prosperitory will be executing a digitally enabled business transformation that exploits the opportunity provided by adopting emerging technologies and seamlessly integrating them into new business processes and capabilities.

The day after: Sobriety, frugality

The question is whether we, as individuals, businesses, investors and public authorities,...

How to manage digital transformation projects: the Scottish Water story

Energy and utilities organisations could save a lot of capital with the implementation of...

How to manage digital transformation projects: the Scottish Water story
Show all