Actually it was 25 years ago on the 1st April this year that Capgemini (or Hoskyns as it was known in the UK at the time) acquired the Operational Research team from British Coal to create an in-house analytics consultancy. However, the party to celebrate this milestone has only just happened as shown in this photo of current and past analytics consultants at the event: 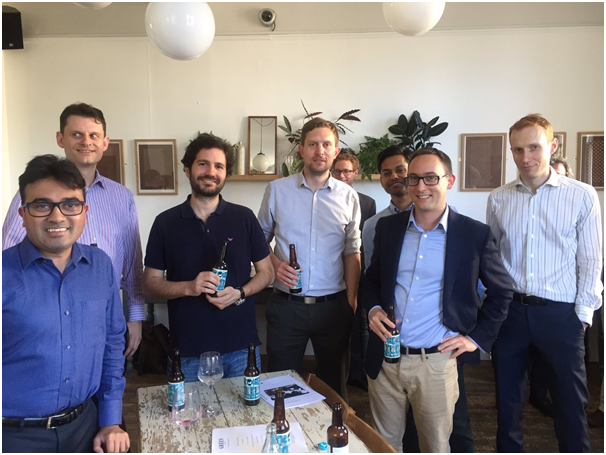 This comes at a historic time, as Capgemini itself celebrates its 50th birthday this year.

So what has changed in the last 25 years?

Thinking about the early 1990s is like watching an old Doctor Who episode. Our team had no laptops, indeed not everyone had a desktop (for those younger people out there, that’s a laptop that stayed on your desk). The power of those computers was small. There was no readily available word processing package, and the available spreadsheet only allowed 1 sheet to be used.

And yet, we still did analytics work. My job was to do the analysis of heavy duty machinery, which involved reviewing data relevant to the failure and replacement maintenance of each machine to produce reports for the head of engineering. Reports would contain details like the predicted lifetime cost of a machine (for which calculating the expected life of key components was required) and the expected time that the machine would (and would not) be available to complete its work.

Twenty five years on we are still doing Operational Analytics work, analysing objects such as electricity pylons and railway tracks, rather than machinery. We also help clients with tricky Supply Chain and Process Optimisation problems, working with partner organisations to maximise the power of the analytics used.

Data has always been used by businesses in one way or another, but in the last 25 years the capacity to store, manipulate and use this data has progressed significantly. Moore’s law accurately predicted the rise of computing power, with it doubling every 2 to 2.5 years. Alongside this, the introduction of consumer devices and applications like computers, phones and the internet has meant that the amount of data created and stored has also experienced massive exponential growth.

Back in the 1990s, it was not easy to use data. There were no easy methods for transferring data to the place where manipulation and analysis could take place, and the tools for doing the analysis were in their infancy. Back then the term commonly used was data mining, although we did not have anywhere near enough computing power to do much of it!

At the turn of the century computing power began to increase, and with it the opportunity to do truly wonderful things with data. As an Analytics team we had always done some form of Customer Analytics work, but as the 2000s progressed into the 2010s the power of computing enabled us to do even better things. And as we started to use visualisation packages such as Power BI and coding languages such as R, the value that we could add to our clients increased immeasurably.

We now have a 15 strong team of Customer Analytics specialists that use customer data to better understand customer behaviours, indeed we have been able to move beyond predicting customer behaviour to helping our clients influence it. We can now measure and affect customer satisfaction and engagement resulting in more sales or take-up of client services.

One of the key threads through many Capgemini projects over the last 25 years has been the idea that we do not just create a model for a project, but we create a model for a client, with the aim of leaving it with them so they can use it for the long term. Traditionally this was in the form of excel and access models, but as the technology expanded we needed to be able to hand over more complex models and concepts.

At the same time, it became clear that clients wanted the ability to do a lot of these things themselves. As a result, the Analytics team has developed an Analytics Transformation service that works with clients to develop their own analytics capability. This type of work could include (but is not limited to) creating technical data environments, selecting the right tools for the analysis or developing the skills of the staff who use these tools.

What about the next 25 years?

So that sums up the last 25 years in the Analytics team – but what about the next 25 years?

A colleague of mine recently created a picture that does a good job of capturing where analytics has come in the last 25 years, as well as where analytics is going. Although I should point out that the team was active 12 years before 2004, I promise we were doing analytics then as well! 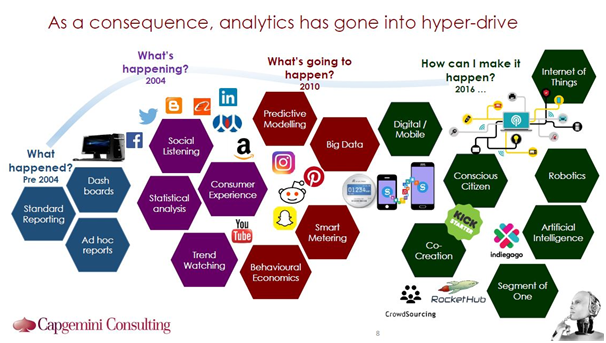 One thing that will be sure to help us succeed is the culture within Capgemini’s analytics team – who are shown below at a recent team event:

This team has always fondly recognised its history, holding at least one event a year that brings together current and ex members of the team. It is likely that there will continue to be a desire for analytics on Capgemini projects, as there has been since the team fully integrated into the Capgemini family. Analytics will also remain at the heart of Capgemini offerings, and indeed has grown beyond the UK, with many international analytics teams coming together to form a global group within Capgemini. We also now have our own analytics academy to train new joiners to be our analytics experts of the future.

So, although I will not be working at Capgemini in 25 years time, I am hopeful that I will get invited back to the 50th anniversary, and I look forward to attending a huge event alongside hundreds of other analytics consultants who have been part of the Capgemini Analytics team.