With the countdown to the General Election now on, I wanted to investigate if data associated with past elections could provide any interesting insight into what may happen this time round and why.

The first topic that I investigated was the number of winnable seats and what has happened to them in recent elections. This follows an article that was recently published on the BBC website. In this article they went back as far as 1992 – but I have used evidence from just the last 3 elections.

For the purpose of this analysis, I have only considered seats that were contested by all of the major parties i.e. excluding the Northern Ireland and Speakers seats. The chart shows the distribution of winning margins across all seats in the last 3 elections. 2005 and 2010 were quite similar with 27-30% of seats having less than a 10% winning margin. The percentage of slightly less winnable seats (those with winning margins between 10 and 30%) is also similar across the years, with between 51% and 55% of seats in this area. And, as expected, the safe seats come to around 19% of the total in both election years.

However, something happened in 2015. In the last election, the number of winnable seats (those with winning margins below 10%) dropped to 19% and, most interestingly, the proportion of safe seats rose to 35%!

So whose seats are these?

I have also noted that neither winnable nor safe seats are evenly distributed across all of the parties. 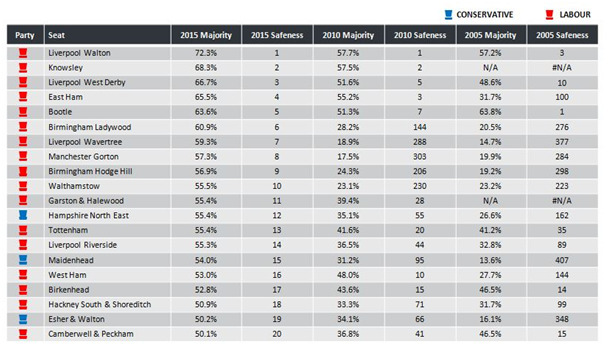 Figure 2 – The 20 safest seats in the country

As can be seen in Figure 2 above, the majority of the safest seats were won the Labour Party. The safest seat is particularly interesting – Liverpool Walton currently has a 72% majority. The same seat was also the safest seat in the country in 2010, but this time only with a 58% majority. Indeed, for the top 6 seats, you can see a large jump in safeness from 2005 and 2015. Is this trend representative of the change in ‘winability’ across all seats? 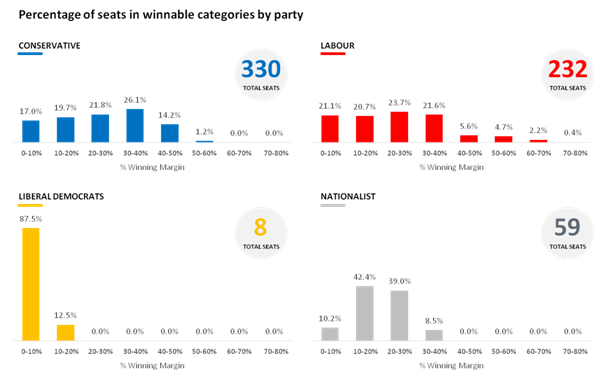 Figure 3 above shows the distribution of safeness of the seats for each party. The party with the least safe seats are the Lib-Dems. Of the 8 seats they won at the last election, 7 of them had less than a 10% margin. The only exception was Westmoreland and Lonsdale that had a majority of 18%.

All of this is summarised in the chart below: – 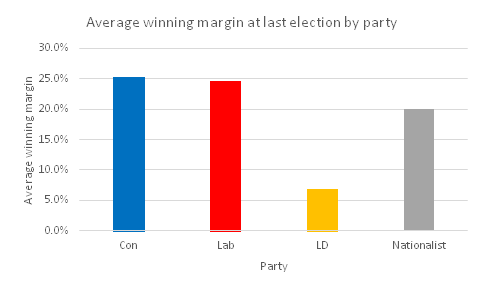 As can be seen above, the Lib Dem’s are the most vulnerable in this election as their average seat has only a 7% margin over the next party. The nationalists are much safer with around 20% needed to beat them for each seat.

Labour and the Conservatives are neck and neck in terms of safeness with both having an average margin close to 25%. That means that it will be more difficult to take seats from either of them in this election.

So what could be the impact on this general election?

Although the majority of seats that the Tories will target in the next election will be current Labour seats, as 93% of the seats where they finished 2nd last time were won by Labour, the reality is that these seats will be very difficult to overturn. Of the 181 seats where the Tories came in 2nd last time, only 21 of those seats are very ‘winnable’ (those that had a majority of less than 5%) and that is 21 from only 46 seats that had a majority of less than 10%. And of these 181 seats, the 46 safest and hardest to win are all current Labour seats.

The net result is that the Conservatives need a much higher swing from Labour to themselves to win a lot of seats. The Lib Dems are much more vulnerable to a swing towards the Conservatives…