The other day I was having a look at an article about how the recently released Jurassic World can now boast as the biggest opening in movie history ($208.8M ). By the way, Whaaaat??, that’s a weekend, like 2 days. Anyway, inside it the author mentioned two words that rang like bells in my ears, “Inflation!” and “3D bump!” So the first question that sprang to mind was, inflation-adjusted, what are the top grossing films? Let’s have a look at the following charts: 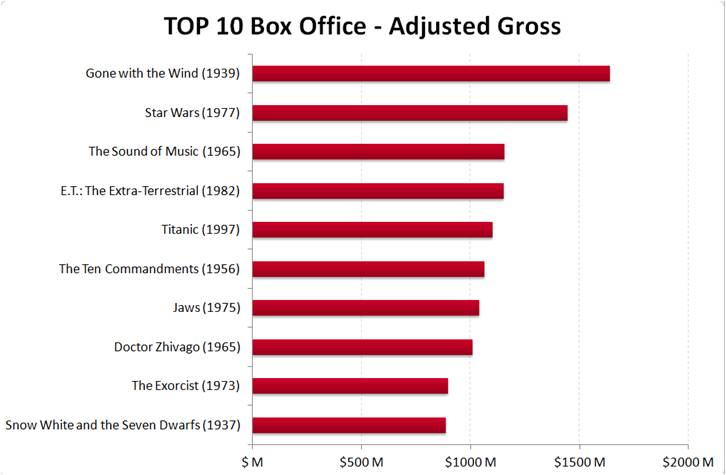 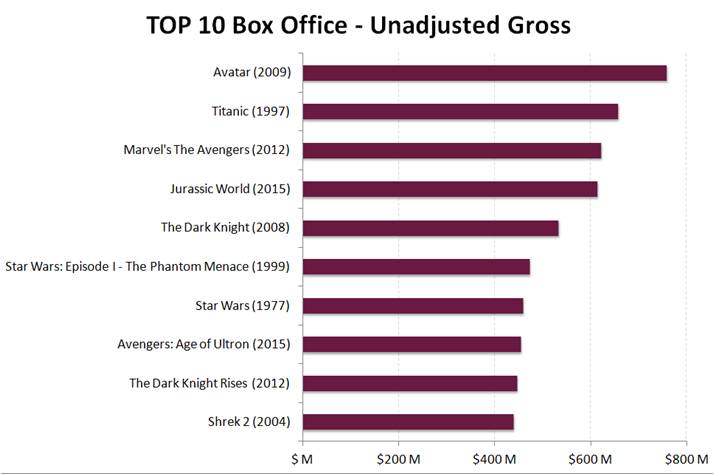 Alright, wait a minute. The “most recent” film in the inflation-adjusted chart is Titanic which was released in 1997! That’s 18 years ago! And Avatar (2009) is not even in there. So inflation has had a huge impact on real adjusted gross and in the case of The Ten Commandments (1956) it has skyrocketed its unadjusted gross about 16 times. Taking a look at Box Office Mojo’s inflation charts we can see the reason: 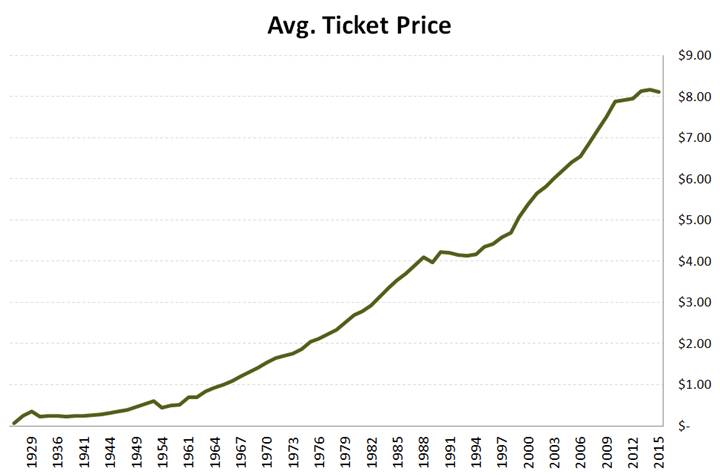 We can see that in 1956 the average price of a ticket was $0.50 compared to $8.12 today – a big difference. I mean surely inflation is a factor we need to take in account but is it fair to boost a film’s gross value by 16 times? In doing so, we could be forgetting about so many other factors and primarily the entire film history.

First things first, it’s all about culture. Back in 1939, going to the movies was like a golden-anniversary level event. In all seriousness, Gone with the Wind premiered in Atlanta on December 15 at the peak of three days of celebrations hosted by the mayor and consisted of a parade of limousines featuring stars from the film, receptions, thousands of Confederate flags, false antebellum fronts on stores and homes….and a costume ball. The governor of Georgia declared December 15 a state holiday.

Secondly, it’s about technology. People now know that the film will be available in DVD, VHS, Netflix, Amazon Prime, to downlo (ergg! *cough*). Let’s not forget, in 1945 TV was not even a household item. “There were fewer than 7,000 working TV sets and only nine stations on the air in New York, Chicago, Los Angeles, Philadelphia and Schenectady, NY”. If you didn’t go to see Gone with the Wind at the cinema, chances were, you would never see it.

My third argument is lifestyle. Scratch that, I’ll call it various. 50 years back and 2 million colours minus 2 less, there was a travelling road show for How the West Was Won in which a tent was driven from city-to-city to show the film in Cinemascope and people would get dressed up and drive out to massive fields to see it. Now excellent movies are cut in half so people don’t get bummed out by the length of the movie. No. I am bummed out that I had to see Lord of the Rings in 3 screenings. On top of that, today we have a million more things to do other than the cinema. Off the top of my head and in no particular order: drinks (I said no particular order), longer working hours (again), sports and, in general, busier lifestyles.

So, all this comes down to what I’ll name propensity to go the cinema. Let’s have a look at the cinema attendance in the UK over the years.

From 1947 to today it has dropped about 8 times. So my new equation now becomes:

As you can see it has more than doubled. So the equation finally becomes:

Yeah, I know equations are all good and fun but which film should actually wear the crown – Gone with the Wind (1939) or Avatar (2009)?

Gone with the Wind is the deserved winner. The 32x price difference between the two films is unquestioned and at the end of the day…..I liked it better!