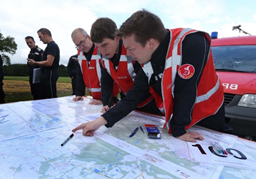 (ANB), Département Nature et Forêts (DNF), FOD Interior Affairs, several fire brigade zones, Belgian Defense, ASTRID etc. The goal of this project was to prove that an adapted tool containing the detailed cartography of the terrain and the ongoing operations would help all involved emergency services fight a wildfire. The Capgemini Belgium team led the delivery of the prototype bearing this in mind. The successful project has now earned NGI a spot in the nominations of the e-government awards, given each year to the best IT projects in the public sector in Belgium. This year, the awards will be given out under five categories; this project has been shortlisted for two of them, E-government Collaboration and E-Government Open Data. We’re happy to announce the project won the award in the first category!

One problem that emergency services face when coping with a wildfire is that they do not have common view of the situation. Often each service makes use of maps that differ greatly from those used by other services on the scale, the version etc. Moreover, the information from the field cannot be directly put on a map and shared with the other units, making it crucial to develop a system that will make it possible for all emergency services to build a common view of the incident.

To reach this goal, Capgemini BE and NGI designed and developed a Proof-Of-Concept (POC) application integrating the following five components:

The POC was evaluated during a large scale terrain exercise on June 17, 2017, in which different fire brigade units, the police, the civil protection, Belgian Defense, ASTRID and ANB participated actively. Indeed, they will be the end-users of the future application and as such have all the business knowledge and insights needed to evaluate the developed prototype. The participants’ feedback was given directly through their individual evaluation forms. They considered the POC as a very positive initiative. Moreover, the field test was widely covered by the media, which underlined the importance of a uniform operational cartography towards the general public and the political world.

As main deliverables in this project, a functional-technical analysis and a feature catalogue were provided. They were produced with the collaboration of all the organizations involved. Based on these Capgemini BE supervised the development of the POC, which was actually performed by ASTRID as an extension to their GIS viewer application. After the field test, we also delivered a final report integrating the positive scores and the constructive remarks that would have to be taken into account when building the operational application. Here is a summary of the compiled remarks:

In general, the basic chart CartoWeb.be was well received by the participants. CartoWeb.be contained sufficient detail regarding the natural areas and was readable to users in both print form and on screen. The main remarks were that the service should contain all street names (at the moment some street names are removed from the map at coarse scales), also cover the neighboring countries and contain sufficient topographical information. 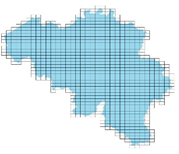 The index grid was experienced by the participants as a useful tool for determining locations on the site. Many would also like to use other types of incidents and ask for the WIG to be made available as a separate layer for free use within other types of crisis management applications.

The key improvements identified by participants included: simplification of WIG numbering, its combination with coordinates (universal UTM, military UTM or GPS coordinates) and resolving of graphical conflicts (the WIG code is indeed not always readable).

The presence of thematic data (such as water supply points, campsites, access points, etc) on the printed maps and in the application is of great importance. This extra information provides a very high value add in terms of communication, orientation and security.

Given the importance of legibility of maps, graphic conflicts should be avoided as much as possible in the future. The graphical conflicts mainly exist between the base and street names, the coordinates grid, the WIG and the thematic data. 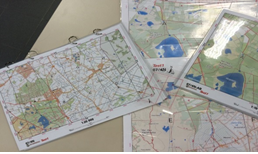 In general, the atlases were well received and described as user-friendly. Each team at the site received 1 atlas. In the headquarters, those atlases were supplemented with A1 overview maps at scale 1:10,000.

Some teams indicated that the 1:25,000 maps were the easiest to use for localization and orientation: they contained all the needed information and covered a relatively large area. 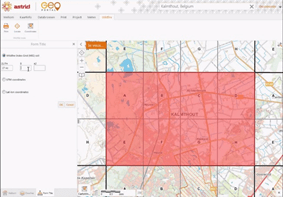 The Wildfire application was generally very well received. The coordinates and location tools, in particular, were extensively tested and positively evaluated. The development of the operational application should take account of the following aspects: connectivity, use of different coordinate systems and different coordinate formats. The testing of the annotation and printing functions were nonetheless very limited. One reason for that was that the current annotation functionality is very basic in the POC.

Once upon a time, not so long ago, a Walloon party chairperson wished for there to be an...

The Metaverse for Beginners

At the end of 2021, Facebook announced the end of social media as we know it today, stating...

The Metaverse for Beginners
Show all