Rugby sevens is already one of the most exciting and entertaining sports in the world, but the development and increased importance of data and insights in sports provided an opportunity for the use of data analysis technology to engage with fans. This meant that World Rugby, the international organization that oversees and manages global rugby competitions, needed a process that would allow it to innovate and expand the impact of data on the representation of rugby and the overall fan experience.

To begin this process, Capgemini became the Innovation Partner of World Rugby. This collaboration built upon the shared values of the two organizations, which included a mutual interest in and admiration of the sport and a passion for developing a best-in-class experience for the fans. In addition, both organizations understood the importance of an agile methodology when pursuing innovation; this was based off of Capgemini’s Discover, Devise, Deploy, and Sustain approach. This joint interest and approach cemented the partnership and ensured that World Rugby and Capgemini began the journey with a solid foundation based on cooperation and coordination. 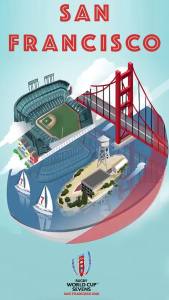 For the first year of their collaboration, Capgemini and World Rugby wanted to narrow their focus for innovation to one specific area and selected the fan experience. With this decision made, the organizations had an established purpose for changing the way in which key stakeholders, including both new and existing fans as well as commentators and the media, engaged with the sport.

In addition, Capgemini took the opportunity at Capetown to interview fans in order to fully understand the persona, needs, and wants of different types of fans from first time viewers to long-term supporters. The partners recognized that the new fan experience would have to take these differing levels of engagement and interest into account.

Capgemini then set about working with World Rugby to challenge, refine, and prioritize the initial set of concepts. To do so, the Innovation Partner hosted additional workshops in London and Dublin during January 2018, to which it invited a mixture of stakeholders who had attended the previous event and those who had not been able to take part. Once again, this group had a variety of experience with rugby sevens, ensuring that input from these events reflected a wide range of knowledge and engagement.

Each workshop began with Applied Innovation Fundamentals at the Applied Innovation Exchange (AIE), Capgemini’s global platform designed to enable enterprises to discover relevant innovations and to contextualize and experiment within their specific industry. At this point, the early innovation concepts were presented for consideration. This was followed by a transition to the Accelerated Solutions Environment (ASE); a Capgemini facilitation team that supports organizations as they transition from solution design to implementation. During this stage, the Insights and Data team presented the output of its performance review as stakeholders were guided through a process that pared down the concepts into a more manageable set of eight ideas that Capgemini and World Rugby could focus on in the first stages of the innovation journey. 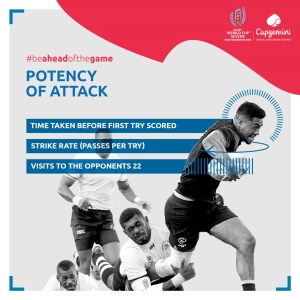 Meanwhile, the Digital Stats Hub brought more digitalization and greater organization of the existing database maintained by World Rugby. Previously, game commentators would receive paper print outs of relevant statistics and match up details. But with the Digital Stats Hub, they began to receive a digital output in real time to quickly compare the history of each match up and pull the most relevant data to the forefront. This experience is now being extended to the media and will eventually reach the broader fan base.

In addition, the partners are following the examples of other sports organizations by exploring opportunities with Virtual Reality (VR) and Augmented Reality (AR) to further improve the fan experience. This includes concepts such as a virtual t-shirt cannon, in which fans use their mobile devices to win a voucher for a t-shirt instead of an employee firing t-shirts directly into the crowd. With the launch of every new technology, Capgemini will continue to support World Rugby as part of the Sustain phase of its innovation methodology. 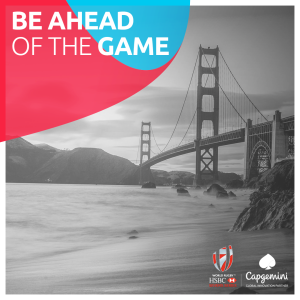 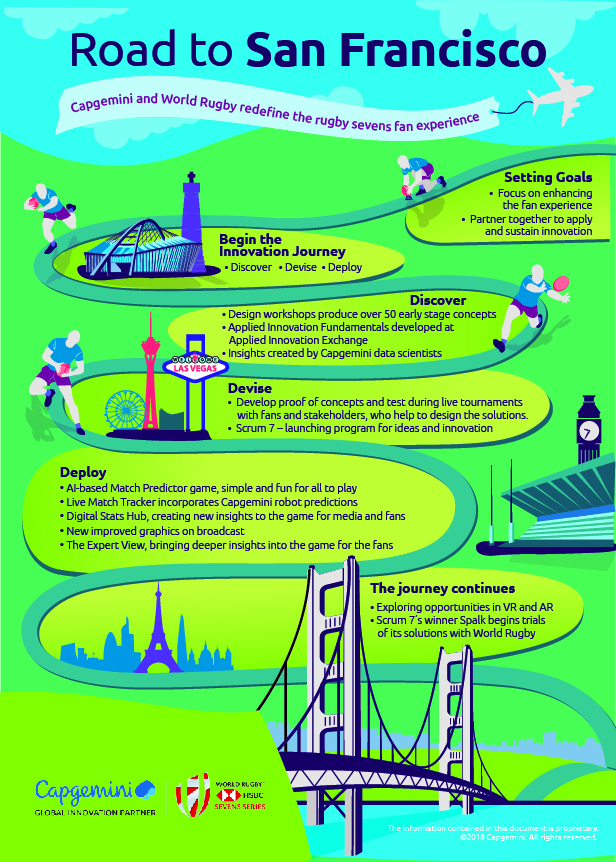 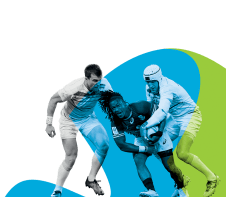