We are not on track to mitigate global warming, even with the pandemic drastically reducing emissions in 2020. One-hundred percent clean energy is possible because sources of wind and solar power are practically infinite and unit costs keep falling. With electrification, demand is predicted to soar as EVs, and electric heating become the norm and green hydrogen is called upon to even out supply. So, is 100 percent clean power a fantasy? What role can nuclear have in getting us to net zero? What mix of technology and policy will it take to reach escape velocity and leave fossil fuels behind?

At Capgemini, we’ve been observing energy markets for more than 20 years through the medium of our annual thought-leadership exercise: The World Energy Markets Observatory. As a company, we are deeply committed to the fight against climate change and we are acutely aware of the fact that energy use is responsible for 73% of the planet’s emissions.

Year after year, we have seen the surge of clean energy – solar and wind, of course – but other sector and digital technologies offer solutions to global warming as well: biogas, bio-fuels, storage, hydrogen, carbon capture and storage, artificial intelligence, automation, IoT, etc.

Over time, we have seen a drastic decline in clean energy costs, which would have been totally unexpected and unpredictable 20 years ago. This decline creates a virtuous cyclical effect: prices decline when markets grow, initially boosted by subsidies, incentives, or appropriate economic signals (carbon taxes and related floor prices). As markets expand and technologies advance, prices diminish even further – a kind of Moore’s Law for wind and solar renewable technologies. As a result, solar and onshore wind LCOEs have become competitive in all markets with all other sources of electricity generation, except perhaps fully amortized hydro.

Pure clean power isn’t a fantasy. It will happen. It is just a matter of time.

The technical feasibility of 100% clean power can be seen in some countries.  However, achieving pure clean power everywhere will only be possible by solving multiple challenges. Let’s consider the six main challenges: 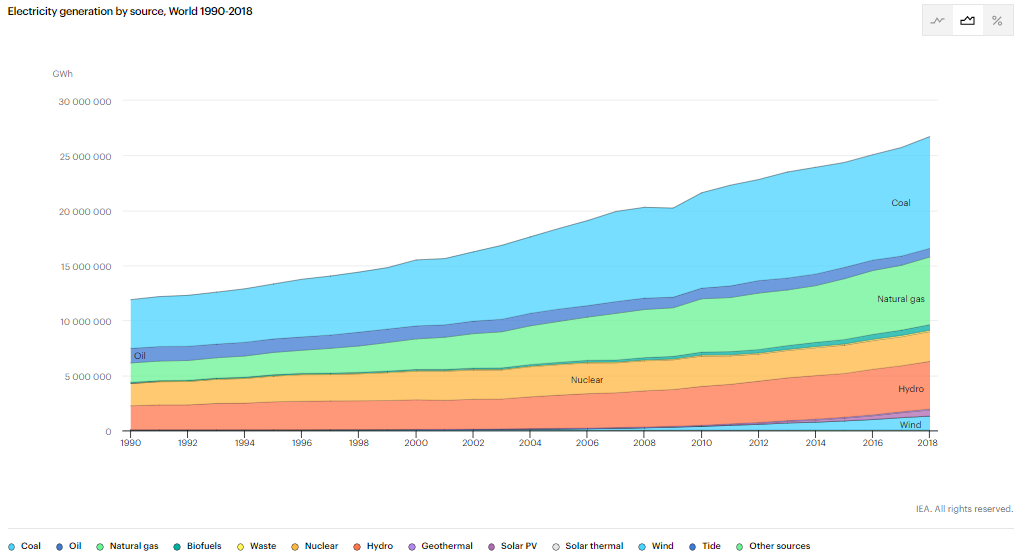 These six challenges must be met to transition to 100% clean power. We should consider the electricity costs on top of electricity generation (network management and flexibility, for example) that are not fully compensated by the declining cost of renewables.

Let’s take a glance at the consumer perspective of what needs to be done to achieve pure clean energy, beyond onshore wind and solar farms acceptance:

Beyond renewables, many technologies can help meet net- zero targets 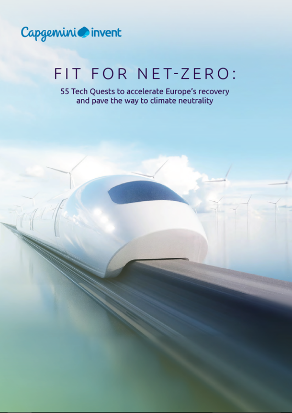 A recently published report by Capgemini Invent and Breakthrough Energy at European scale demonstrates this fact by taking a deeper look into the role the technologies will play.  In Europe, our research shows that these technologies (55 technologies covered in the report) can bridge the gap for 55% GHG reduction by 2030 and 100% by 2050.

The report also predicts a net economic value creation of EUR800bn and the creation of 12.6m jobs, from the development of these 55 technologies by 2030.

The main technologies contributing to decarbonation (at a European scale) are: 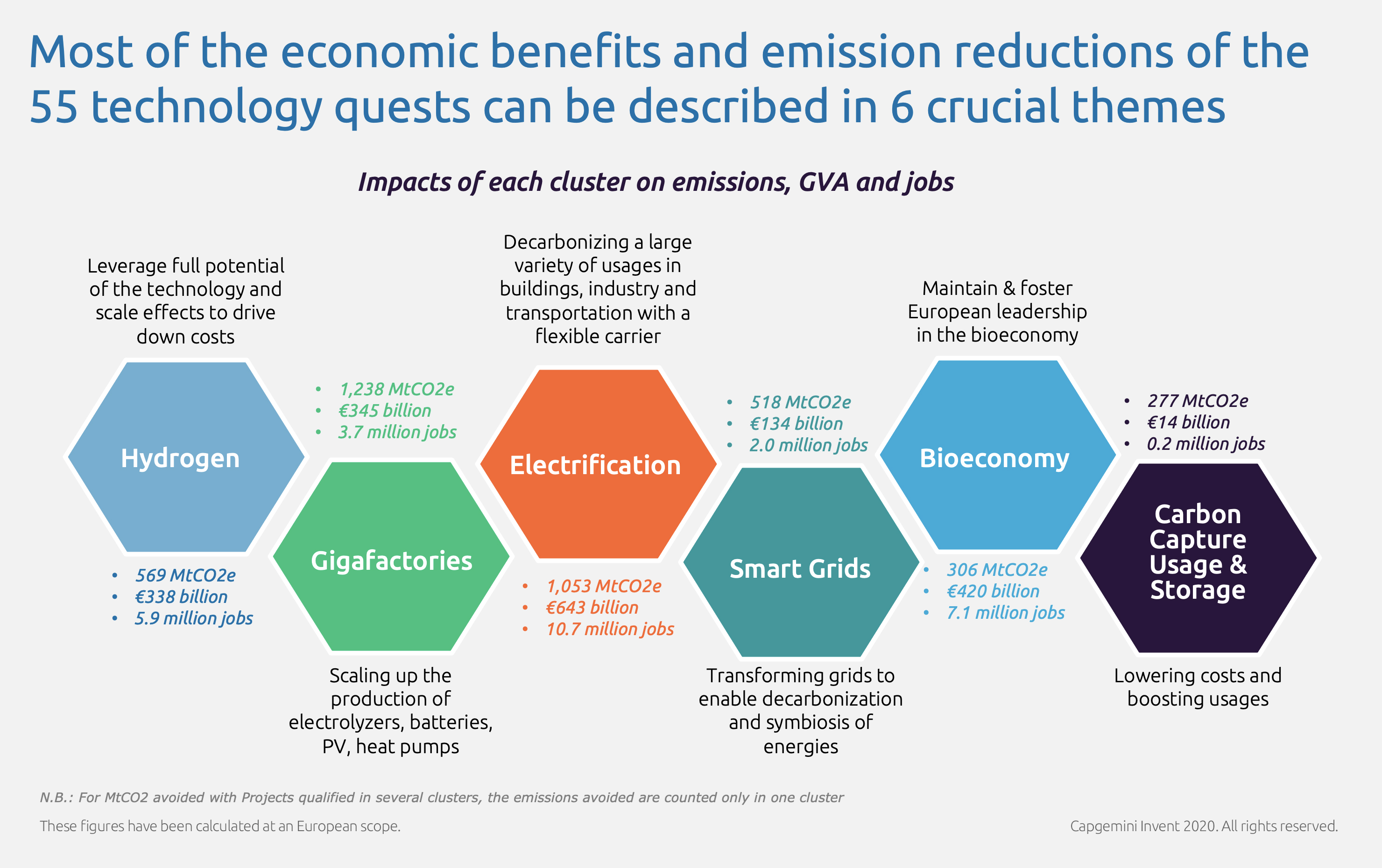 Nuclear can play a major role for the transition to 100% clean power.

Nuclear is a low-carbon dispatchable generation source (lower than or comparable to wind/solar emissions, if you consider the full cycle, rather than just the generation time) that will play a major role on the road to 100% clean power in nuclear-friendly countries.

Nuclear represents 10% of worldwide electricity generation in 2020. The IEA states that this level (10%) should remain stable until 2040, if 150 additional reactors are built (there are 455 today) or if SMR technology is leveraged.  Nuclear can clearly play a major role in the nuclear-friendly countries. Leveraging nuclear reduces the need for significant investments and limits the flexibility needed to ensure the security of supply within electric systems. There is also a concern of nuclear opponents that will work to have it banned in many countries.

Conclusion:  being 100% low carbon electricity is desirable and essential. It is already underway and unstoppable. But achieving it will take time.

It will take at least 10–20 years for the most  engaged states or countries to reach this point (with a bold roadmap), which means a progressively higher share of renewables in the electric mix – from 20% in average today to 100% at some point between 2040 and 2050. But this will not happen everywhere. California and Hawaii are fully committed to becoming 100% renewables powered, while Germany, Portugal and Scandinavia are the closest European contenders.  During the first 2020 lockdown, we saw a decrease in consumption and priority given to low-to-null-variable cost electricity production. As a result, we were in an unexpected situation, reaching 2025–2030 clean power forecasted levels. This endangered the stability of the European grid (in Germany, the UK, and Portugal, the situation was too complex to manage) with a share of renewables above 40%.

It will take most countries from 20 to 30 years, the political will power, and thousands of billions pa (globally) to meet the 100% clean power targets.

The first movers will be progressive countries that have political courage to endorse related transition costs and impacts. A nuclear / renewables mix would facilitate the transition. A global agreement followed by commitments and action plans is a must, but so is local engagement (territories, states, provinces, countries, regions).

We recommend starting the journey to pure clean power immediately.

Although much has been said about our industry’s contribution to global CO2 emissions,...

How to approach carbon offsetting on your path to net zero

Over the past couple of years, and even more noticeably since the beginning of the global...