Throughout history, there is not a single country that has successfully maintained its currency value. Currencies get devalued when central banks print a new supply of money for various economic, political, or strategic reasons. The outcome is always hyperinflation and a search for a new monetary system.

We have seen structural shifts in the monetary system every 30–40 years on average, with the last one being the abolishment of the gold standard in 1971. I believe the global economy is nearing the end of the long-term debt cycle and a new monetary system is due. This new narrative would be based on bitcoin and digital currencies.

In the past, civilizations always reverted to the gold standard when all else failed. But bitcoin has now emerged as a contender to gold as it fulfills the same properties of scarcity. Except it is even better than gold since bitcoin is digital, divisible, borderless, neutral, and immutable.

However, the debate of a new monetary system would not be constrained between bitcoin and gold. It would be the gold standard coinciding with a mesh of bitcoin, digital currencies, and different reserve-backed stable coins intertwined together on different blockchains.

While the internet allows for the transfer of information, blockchain enables the transfer of value without the need for any intermediaries. Bitcoin is the first digital currency that has successfully demonstrated that, but the value of transfer has since transcended beyond money.

Tokenization of assets is gaining traction as companies are tokenizing valuable assets such as gold, land, properties, and commodities on the blockchain. Since these tokenized assets hold value, it could now coexist with currencies to be used as the medium of exchange for goods and services.

Liquidity providers such as Kyber Network have made this possible by offering interoperability swaps between tokens. This would pave way for a future where a car dealer can accept fractionalized property tokens as payment or someone could pay for a cup of coffee with the mile points collected from frequent flying.

Apart from bitcoin and digital currencies, stable coins also play an important role in the ecosystem. It would be the strategic interest of governments to protect their currency by creating stable coins pegged to their reserve currencies. Stable coins also help speed up cross-border payments as the convoluted network of correspondent banks have made international transactions to be cumbersome and expensive.

This is already well underway as Facebook’s Libra is launching multiple digital tokens tied to the different national currencies. Xfers has launched XSGD pegged to the Singapore dollar powered by Zilliqa. China has also launched the Digital Currency Electronic Payment (DCEP) backed by the Yuan.

It would not be long before we see central banks of the US, Europe, and other major economies coming up with their version of stable coins. There would be a race for digital currency supremacy and the first mover will gain the network effect advantage.

The rise of stable coins and tokenized assets has contributed to the massive growth in Decentralized Finance (DeFi). Anyone, regardless of demographics, can borrow or loan in a borderless, trustless, and peer-to-peer way.

An unbanked individual can deposit tokenized assets (e.g., gold, commodities) as collateral on the smart contract and borrow in a stable coin tether (USDT). This was not possible before as the prerequisites of accessing basic financial services are to have an identity and a bank account. But blockchain is changing that and it is accelerating financial inclusion by democratizing the banking system.

DeFi is just getting started and the total value locked up reached USD1.85 billion as of July 2020. Though it is up a staggering 300% from a year ago, this is just a microscopic fraction of the traditional lending, credit, and derivatives market, estimated to be worth a notional value of $560 trillion.

Change is inevitable and we are witnessing the technology of blockchain unfolding across all sectors. Traditional finance is replicating its function and services on blockchain, stable coins are replacing physical banknotes and assets are being fractionalized into digital tokens. The world is moving on a continuum towards decentralization and this is what I believe the future will be. 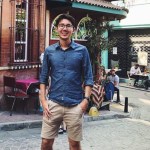