WARNING: Objects in the CES rear-view mirror may be closer than they appear – and coming from unexpected directions. That is a key insight traditional car manufacturers should drive away with following the 2020 Consumer Electronics Show in Las Vegas.

Auto makers have been looking over their shoulders for a decade, worried that Google, Amazon, and Apple would deliver connected cars and autonomous driving, yet at CES the big innovations came from a different source: consumer electronics companies including Sony and LG Electronics.

As I reported in my recent blog post, Sony’s unveiling of its Vision-S concept car stunned the auto world at CES. Attendees at the packed press conference saw a sleek, somewhat futuristic, electric-powered sedan packed with technologies aimed at keeping occupants of the car entertained, safe, and connected.

Sony doesn’t intend to sell this car to consumers; instead, it shows it could supply key components that make connected cars more popular and powerful. It’s smart marketing.

Among the biggest innovations is that the Vision-S is not just a single car. Sony showed off a stylish, electric-powered four-seater but made the point that its EV platform can create coupes, sedans, MPVs, and SUVs. This will help auto makers leapfrog much of the development work and testing otherwise required to ship a car like this.

This platform is about more than EV power; it delivers an experience for drivers and passengers that is distinctive and in line with the expectations seen in our connected-vehicle coverage for years. 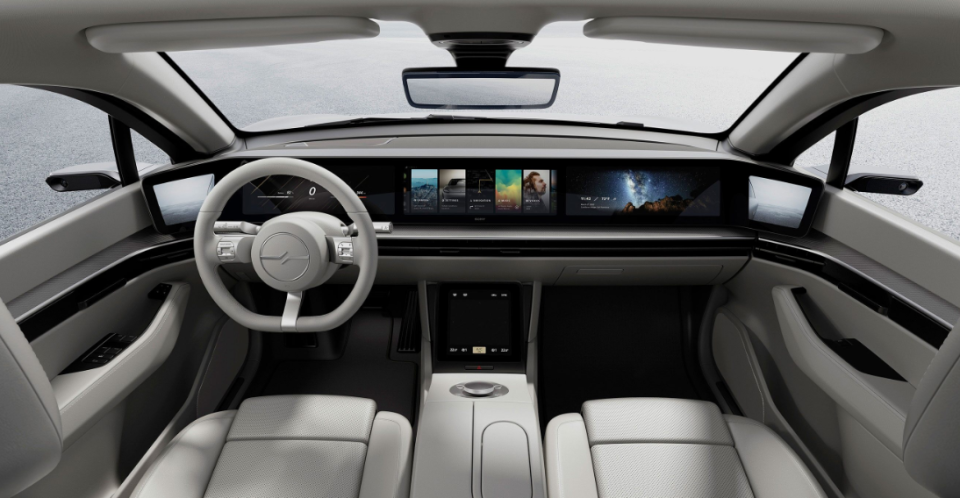 The Vision-S provides screens everywhere in the vehicle, including a massive “panoramic screen” across the front dashboard. Also included are seatback screens and speakers that allow each person to hear individual audio. In addition, the car is dotted with sensors and cameras to provide data and feedback to optimize safety and driver information.

While Sony was making a splash with its concept car, Korean rival LG Electronics showed off an autonomous, connected vehicle that leans heavily into the idea of personalization of the passenger experience.

LG’s connected vehicle is designed for fully automated ride-sharing services, with passengers admitted via facial recognition, functions delivered by voice technology, and individual video and audio services provided to each passenger informed by opt-in knowledge of what they were doing before the ride.

As with Sony, the vehicle itself isn’t really the point – it’s a showcase of the underlying technologies. It hopes consumers will respond to LG leveraging an automotive version of its webOS. That operating system powers the interaction on its 70-million smart TVs, and that entertainment data can make the in-vehicle experience more personalized.

The Luxoft announcement, in particular, offers real insights about LG’s expectations, with the company saying it hopes the partnership will “advance the deployment of production-ready digital cockpit, in-vehicle infotainment, rear-seat entertainment (RSE) and ride-hailing systems based on webOS Auto platform and make it available for automakers, fleet operators, and shared mobility services providers.”

The risk and the promise

Concept vehicles like these from Sony and LG are both a threat and an opportunity for auto makers. These and similar companies have said they don’t plan to produce cars themselves, but that should always change. Also, manufacturers slow to move into connected-vehicle services, autonomous vehicles, and digital personalization may find their competitors adopting innovations from these new players, but the flip-side is that those same OEMs no longer have to do it all themselves. They can lean on non-traditional players for innovation – as long as they are willing to cede some development autonomy.

The introduction of the agency sales model does not just require changes in structures,...

Moving to an agency sales model offers automotive manufactures the opportunity to not only...

Dealers continue to be a key success factor in the adoption of the agency sales model. Our...