We’re going to use the waste and recycling industry as an example of the steps to take when deciding whether blockchain is an appropriate solution to a use case. In this one we see how blockchain can be used to protect the environment, the consumer, and reduce opportunities for fraud.

Blockchain is a list of records that are linked cryptographically on an open and distributed ledger. Once a record has been made within the ledger it cannot be undone without making the same change to 51% of the ledgers at the same moment in time. Due to this, a strong blockchain is one where no one party controls the majority of copies of ledger.

When to use blockchain

Wesley Graham from Blockchain at Berkeley in his blog Building it Better: A Simple Guide to Blockchain Use Cases a should I use blockchain checklist. Below is a slightly abridged version.

Blockchain justification checklist is as follows:

Generally, the person who purchases a waste disposal service is ultimately responsible for the safe disposal of that waste. This has led to consumers being prosecuted because they hired a company which disposed of their waste in an illegal way.

Anyone can start a waste and recycling company. The industry is highly fragmented with companies specializing in everything from the whole collection to recycling/disposal process through to players who operate in one part of the chain (usually collections). The chance of being caught for acting illegally is quite rare and ultimately, it’s the person who produced the waste who is liable regardless of whether they acted in good faith. 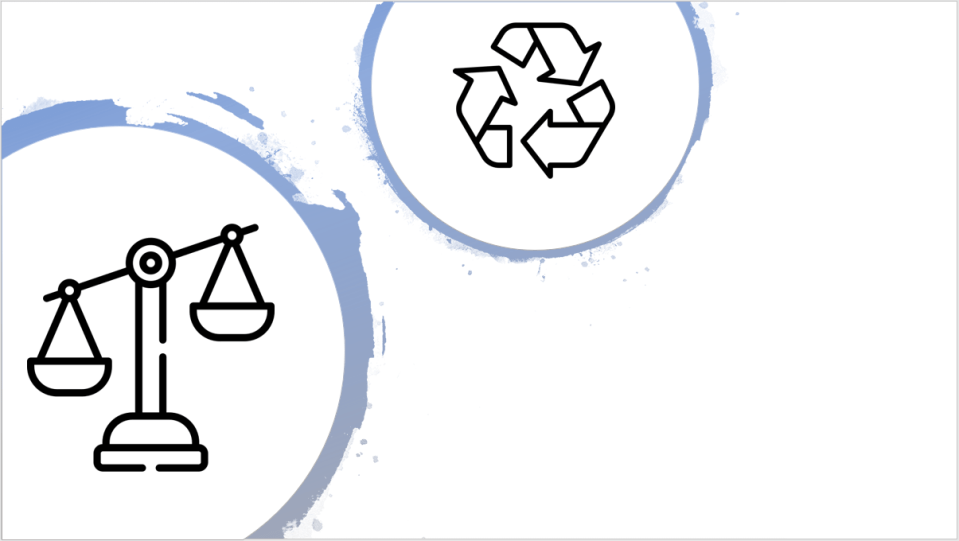 Aim of the chain

The aim of the wasted and recycling blockchain is to track a chain of custody so that the person who breaks the chain become financially responsible for cleaning up the mess.

There is also a second aim of keeping the technical access into the blockchain open and independent so as to prevent price gorging which is see quite often when a state appointed gatekeeper restricts access to a regulated market.

Within this blockchain were working to see if a chain of custody of the waste material has been broken by the material being disposed in a non-authorized way.

Every blockchain has three elements which need to be addressed: 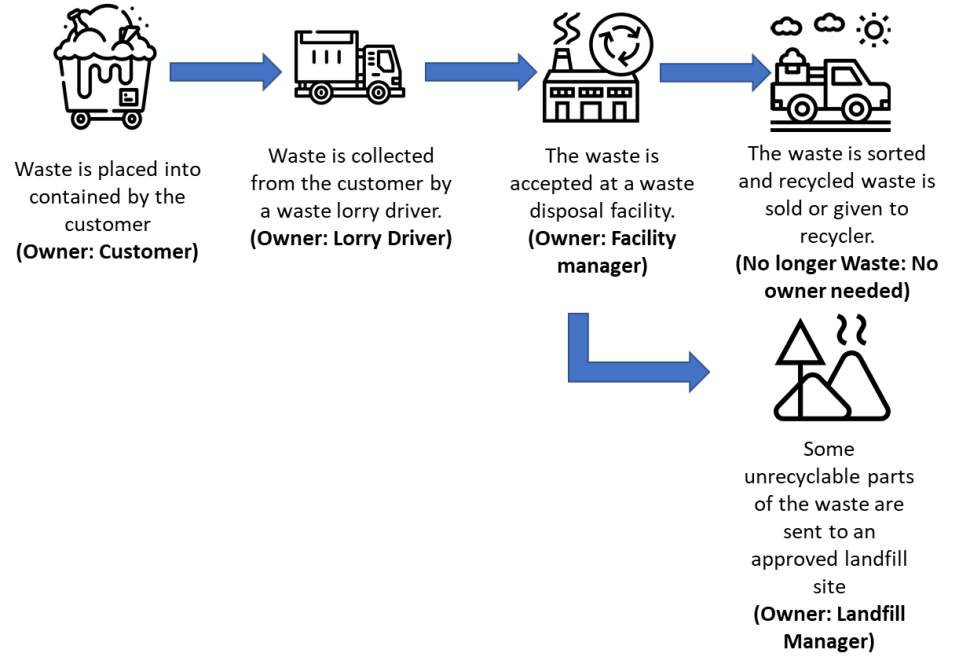 The issue facing many blockchain use cases is data quality, as with all computing, if your starting point is rubbish data then the end point of the chain will be worthless. Blockchain only works if the person at the beginning of the chain is incentivized to be honest. In this case the customer is incentivized by their potential liability if the rubbish they provide is inappropriately dumped.

Block chain has four distinct stages of a transaction which need to be considered when deciding the most appropriate data to be tracked.

Some chains will never reach the chain end. An example of this would be a bitcoin since a bitcoin is never designed to have an end of chain.

An example as to how this looks within a transaction journey 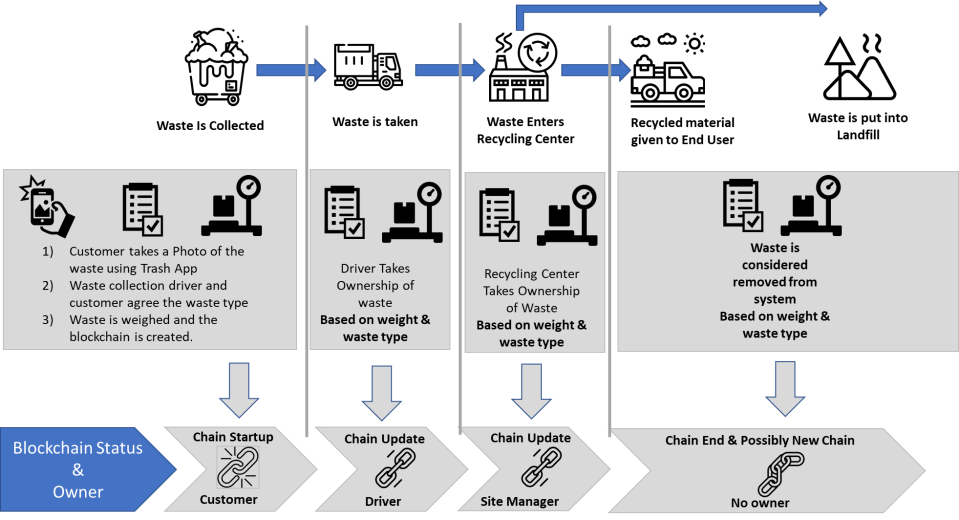 The success of any blockchain depends on whether the architecture meets the environment it is designed to operate in. The architecture should consider risk such as possible points to inject false data into the chain or having too few unconnected holders of the ledger and therefore ending its independence.

In the diagram below, the architecture relies on a series of approved access mediators who produce the software and certify the systems which can update the distributed ledger. However, the access mediators do not themselves have access to the ledgers. Updating the ledger can only be done via an approved or certified application which is tied to an individual waste provider via username, password and form of hardware which forms a unique key. 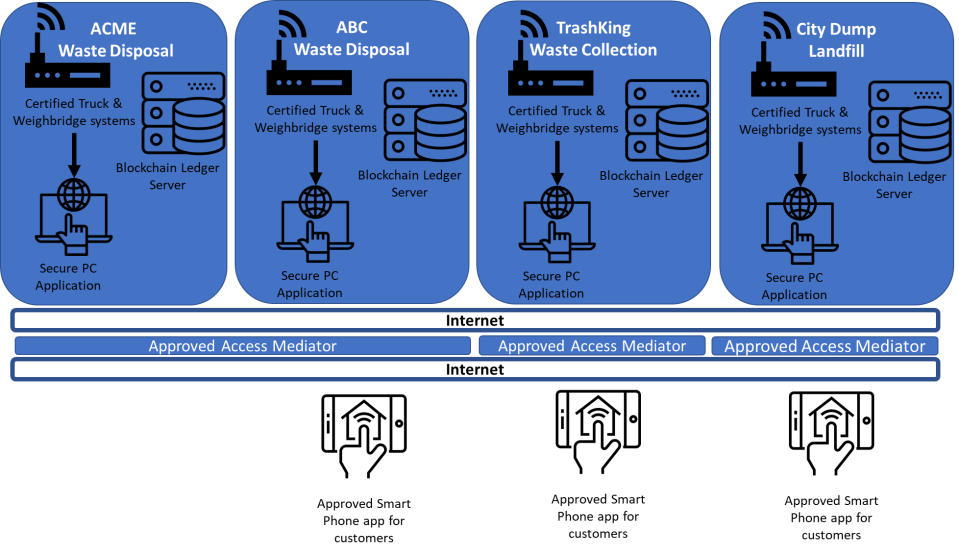 Details within the architecture:

The value of blockchain depends on the situations and use case. Quite frequently, if others are not investing in the technology and the use cases and there is no overall governance authority run by unconnected ventures then it’s probably not blockchain that an organization needs.

With over 20 years’ experience bridging the gap between business and solutions-based on IBM, SAP, Microsoft and Oracle technologies. Feel free to reach out to me for advice on appropriate use of blockchain.