Let’s define a new service that would leverage these while providing value-added services to the end customer as well as additional services.

STEP ONE: AXA Fizzy, an interesting use case leveraging blockchain technology will offer its customers a totally new experience.

The AXA Fizzy service launched in 2017 is a blockchain-based service that automatically and instantly reimburses the customer in the event of flight delays through a smart contract. The customer subscribes to Fizzy for a specific flight and their personal and flight information is compiled in a smart contract in the Ethereum blockchain. The smart contract monitors the flight and if it is delayed by more than two hours, the customer automatically and immediately receives reimbursement from AXA, with none of the hassle of having to file a claim. Fizzy is still testing the concept directly in real market conditions. Currently, only flights between Paris-Charles de Gaulle Airport and a few airports in the US are served with less than 10,000 euros of premium in six months—not exactly a huge success, but still a step forward in a very interesting direction.

Bajaj Allianz General Insurance launched a similar product to accelerate settlements in the travel and motor segments, reducing the time to process a motor incident claim from seven days to a mere 20 minutes.

From a technical standpoint, such services could be built without using blockchain technology. In both examples, it is more the concept of blockchain and smart contracts that are leveraged than the technology itself.

Blockchain offers three core values that are fundamental for the insurance industry:

The last two values build trust between the customer and the insurance company.

STEP TWO: add an ounce of data to fully leverage the potential of parametric insurance.

Now let’s build on this service to design a vision of the travel insurance industry of the future.

According to the World Insurance Report 2017 coauthored Capgemini and Efma, data is the new black gold for insurance companies.

Imagine a Fizzy-like product extended to the +90,000 worldwide commercial flights that take place every day. Now imagine leveraging the wealth of information provided by APIs such as FlightStats or FlightAware (to name a few) of each flight and each airport. Such a product would provide you with a rich set of data upon which to build custom travel insurance for each flight while allowing the customer to pay lower premiums for airlines that are more frequently on time or to pay lower premiums for flights between airports with fewer delays. The customer would be encouraged to select the most reliable airline or airport, and everyone would be motivated to improve customer experience.

Let’s take a concrete example based on flight performance reports for January 2018 as published by FlightStats. Of the 48,543 flights it operated that month, Air Canada was on schedule only 56.06% of the time while Lufthansa was on schedule  82.96% of the time for its 39,655 flights. Currently, a customer buying a ticket on an OTA would pay the same premium for flight-delay insurance for either airline. With parametric insurance, the Lufthansa flight would have a lower premium than Air Canada.

This is a simplified example; a realistic and viable product would need to combine data from various sources (also known as “oracles”), including:

A team of actuaries and data scientists would be able to design a travel insurance product capable of anticipating events ranging from pilots’ strikes to volcano eruptions, such as  Eyjafjallajökull in April 2010.

As the Ash‐cloud of April and May 2010: Impact on Air Traffic report from Eurocontrol stresses:

“Delays [in Europe] in April were up compared to April 2009 (which was a historic low), though better than recent months. Unsurprisingly, there was a large increase in delays attributed to ‘other’ (i.e., volcanic activity). However, May saw a much bigger impact in terms of delays, with 43% of flights delayed on departure, 10 percentage points higher than 2009.”

If you add to this all the flights cancelled during this period, the eruption of Eyjafjallajökull disrupted some 100,000 flights and 10 million passenger journeys; passengers who might have benefited from parametric insurance that took weather forecasts into consideration.

Traffic in Europe before and during the April 2010 crisis— source: Eurocontrol 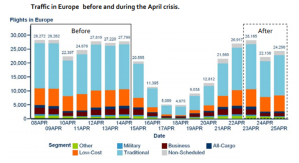 STEP THREE: build a service orchestration platform to recreate the value proposition of the insurance company for a better customer experience, lower premiums, and lower risks for all.

An insurer with a service orchestration platform could provide state-of-the-art travel insurance customer experience and set the standard for the entire industry.

Let’s put ourselves in the shoes of the customer. Our plane is late and our insurer sends us notification that we have just been reimbursed for the delay. That’s a good thing—but now what? We might need to make up for the delay somehow or find the best way to spend our time while we wait for the next flight. So many of the services we easily find at home can become difficult to find when we are travelling. Who wouldn’t appreciate a concierge service that could book such services in a city or an airport far from home? The inconvenience of the delay would be mitigated by a productive and enjoyable experience. 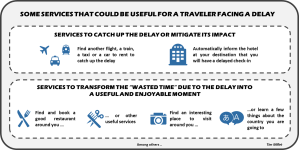 Now let’s go back to the insurance company’s perspective.

You know your customer. You have at least one means of direct communication with them (since you proactively notified them of the reimbursement), and you know that they are currently facing the hassle of a delay. You can leverage this information and provide your customer with an enhanced experience by suggesting various services through a service orchestration platform—effectively becoming the AirBnB of travel insurance services.

This would be a win-win model—providing enhanced customer experience for them and additional revenue for you if you earn an introductory fee for each service booked through your platform.

As this article from FINTECH Circle pointed out: “We are now in the age of oil lamps of insurance while electricity is being invented in our backyards.” Insurance companies must take advantage of this opportunity to reinvent the travel insurance value for end customers.

Enough dreaming—let’s take action! Should you be interested in this topic, I would be happy to discuss it with you.

Special thanks to my colleagues Jerome A. and Paul H. Our passionate debates have certainly contributed to this article.