Capgemini, has recently published the nineteenth edition of its annual study, which for the first time goes beyond Europe and becomes the World Energy Markets Observatory  report (WEMO 2017). Some key learning’s regarding the renewables sphere are proposed here.

In five years the landscape of power generation has drastically changed. In 2016, the 162 GW of new renewable capacities accounted for 55 percent of all new power capacity installed in the world during the year and for 90 percent in Europe. Onshore Wind, PV and Offshore Wind are definitively the winning technologies with growth rates of the cumulated fleet of 16 percent, 33 percent and 30 percent, respectively, per annum over the five past years. For the first time, more solar capacity was added (71 GW) than any other technology. 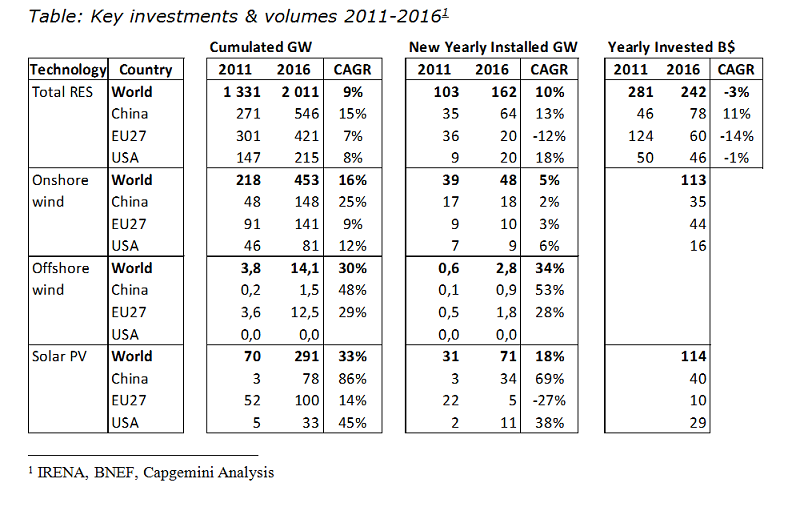 Offshore wind has seen unexpected cost cuttings. In UK both Moray and Hornsea 2 projects were awarded at a price of 65€/MWh, well below the 105€/MWh of Hinkleypoint C project, therefore fostering debate. In Germany bidding prices of 44€/MWh for completion between 2021 and 2025 have been accepted, with first offshore wind farms to be built without subsidies.

Additional investments in grid reinforcement and smarter grids development can be estimated to an average of 15% to 40% of the generation investment, at least in advanced economies where networks are already existing and where consumption is more or less flat from now on. When power consumption is growing quickly, an admitted rule of thumb derived from 1970-2000 analysis in western countries is that 0,5-1$ has to be invested in grid development for 1$ of additional generation.

Energy and Utilities: What’s next for a sector under consistent cost pressure

Cost pressures are nothing new for energy suppliers. Changing economic conditions and...

A conversation with Randall Cozzens about how the present health emergency, coupled with a...

The Future of Energy: North America – Part 2
Energy and Utilities

A conversation with Randall Cozzens on how today’s crises may affect North American energy...

The Future of Energy: North America – Part 1
Show all