Google, Amazon and Facebook (GAF), to name a few, could become significant in the retail banking space; where decreasing consumer loyalty is driving firms to become more customer-centric, in a bid to improve retention. Whereas Fintechs don’t have the size or capital endowment to seriously threaten the big banks, Tech-fins certainly do. In this case, size very much matters.

Each of the aforementioned tech giants claim to have over a billion active monthly users. To put that into perspective, HSBC claims to have 38 million customers worldwide. The potential of any of the big tech players cross-selling financial services to customers as part of their existing offerings, could make for a daunting prospect for the monolithic banks.

They have already made their first forays into the market with the likes of Apple and Android Pay. Amazon has ventured into commercial lending by originating loans to small businesses and merchants, who are selling products on Amazon’s marketplace.

It has also started offering a credit card, which customers can use to claim Amazon reward points. Facebook has also made its own entry, by providing a payment service which can be completed via debit card using their Messenger app.

These are just a few of the examples which demonstrate the intentions of the big tech players. This shows that they are already interested in facilitating transactions.

If we take Google as our example, having launched the Google Wallet, they are now taking a further step into financial services. They have also just debuted Tez, a mobile payments app in India.

As these apps, similarly to Apple Pay and Android wallet, are not technically banking services, the firms currently do not require banking licences. However, looking forward, I envisage them operating in the day-to-day personal digital banking space, as opposed to branching into the more complex financial services, offered by the big banks and insurers. It would make for a much more compelling value-proposition to integrate further banking options, and offer these to customers alongside their current solutions.

Imagine inputting your personal financial data, which will interact with Google’s algorithms, to recommend you the most appropriate mortgage. Then imagine further down the line when Google might provide the low-interest mortgage you’ve been dreaming of.

It’s the possibility for greater personalisation that can really revolutionise the financial services industry, and separate Tech-fins from the traditional banks. We can also certainly expect an elevated customer experience from tech firms. They have continually proven that they are nimble enough to bring new and improved features to market quickly, unlike the historically dominant banks.

As opposed to smaller Fintechs, these Tech-fins have the customer base and capital to seriously compete with the big banks. Their challenge will lie in successfully gaining customers’ trust.

Customers need to have the confidence that a relatively new and fast-growing tech company is also secure enough to look after their money. Today, it is suggested that 1 in 3 of us would already be willing to switch to Google, Amazon or Facebook for banking services.

If any of the big tech players were to translate this cross-selling opportunity to their existing consumer base, it would result in a substantial number of retail banking customers for the firms. It would then be the Tech-fins’ job to increase trust and confidence in their banking solutions, to retain those customers and attract new users.

Then there’s regulation. This could be extremely costly if not handled correctly, as the penalties for non-compliance become ever more severe, in the wake of the financial crisis.

To date, the Tech-fins have been able to mitigate this risk by not positioning themselves as banks. This will become more difficult as they expand services and gain more traction. At some point, they will have to be prepared to adhere to these directives; so that they can make a serious dent in the sector and truly disrupt this age-old industry. 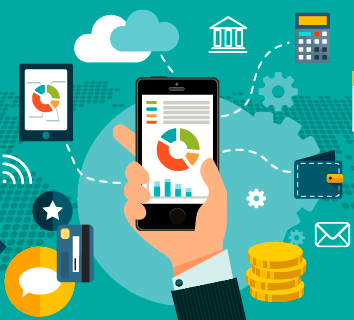 In the quest for ubiquity, GAF are in a great position to capitalise on their enormous customer bases and branch out into financial services. I’ll leave you with an awesome Google Bank concept piece, which visualises the potential future of retail banking.

I’d suggest tech firms should start attempting to redefine the value proposition offered by traditional banks. Rather than looking to your bank as a separate entity, from which you withdraw or receive money to facilitate transactions; it might well be that typical banking activities become more integrated with other digital services offered by tech firms.

Google can facilitate this customer journey; from searching for a restaurant (Search), to finding the restaurant you’ve chosen (Maps). Now, imagine using your digital Google credit card feature to cover the bill – a tasty proposition.

To prepare technologically for Banking 4.X, banks must evolve legacy systems toward core...

Who needs high-code developers? Citizen development is here for Financial Services
Show all