In my previous blog, I promised to talk about the purpose behind a brand change. In other words, what should be the guiding foundation of a company, and eventually its brand?

Such rebranding projects can take several months to complete, and it’s often difficult to know where to start. The first step should always be to review the company’s and the brand’s “raison d’être.”   This is where we at Capgemini, together with our agency (BrandPie), started to set the foundations for our recent rebranding project.

The good news is that we quickly identified that our look was often seen as dated, while our vision and mission, the fuel of our differentiation, seemed to be current, and consistent: a differentiation based on our human centricity (even when dealing with technologies).

It was our issue; we had a misalignment between the body and the soul, a concept that has been well described by Forrester analyst’s Dipanjan Chatterjee in one of his summer blogs. I’d like to take this opportunity to thank Dipanjan for having helped us in the last mile before the launch.

So our main  challenge was: how to evolve our brand while respecting its main principles, the people, and injecting other essential characteristics required by the “new world:” emotion and action, precision and simplicity.

As explained in many branding view points, when rebranding, you have to make a tough decision: what do you actually keep? A simple and yet interesting article on mistakes not to commit when rebranding is worth being read.

Building the bridge between past and future

At the end of this first step, we agreed on what needed to be kept and what need to be celebrated. We agreed that our name, known and recognized internationally, was a strong asset worth keeping. We also concluded that the ace of spade, picked by Capgemini’s founder, Serge Kampf, because it was the most powerful one in a deck of cards, was an iconic sign, rallying internally and recognized externally.

So we decided to start from these two ingredients. With these principles laid down and the intangibles agreed, we began to create.

This design phase saw many steps, versions of the ace of spade being round, square, diamond—multiple fonts, pointed, rounded, bent, or straight. However, if several new design proposals caught the attention of the teams, it was finally something else that called them—the brand purpose itself.

If we believe that people are key in the business success of technologies, why not position the human factor at the center of the new logo? (Interbrand last report describes in details the value of purposed companies)

This is where a handwritten way of writing Capgemini appeared: a craftsman’s work, an artist’s work.

But who’s the artist?

The link with humanity seems to be quite obvious with handwriting, but a question systematically came: who could or should be the writer?

Sometime in the middle of the summer ‘17, thinking of  the film we produced about Serge Kampf together with @thomashirsch and @wordappeal for the Group’s 50th anniversary, his words came back to my mind: “There is only one signature for a company: its name” and he added “look at you, how many signatures do you have?”

What could have inspired us better for a new logo and at the turn of the 50th anniversary than the writing of its founder himself? 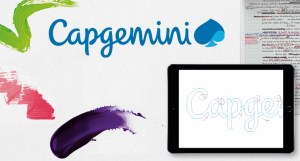 This post is the second of a series of three, these views are mine.

Aligning the stars: when and why a company should change its brand identity

After thirteen years, Capgemini has a new brand identity. Here are how the stars aligned.

Aligning the stars: when and why a company should change its brand identity
Show all