Apple famously has $5,000+ sales per square foot. For many years, sales/square foot has been a standard metric for measuring success of retail stores. That’s set to change. Why? Because it increasingly looks like buying something is not quite high on the wish-list of consumers. Our Future of Retail Store research from earlier this year found that as many as 57% consumers want retail stores to evolve to social spaces or provide learning or inspiration. And retail chains appear to be taking the hint. Apple, in its just-concluded event on 12th September, said that it was renaming its retail stores as “Town Squares” since they are now “gathering places”. As ZDNET says, “Apple’s new stores will be a cross between a retail store and an education center, wrapped up in a plaza-like package that resembles Apple Park.”

Among more traditional retailers, Nordstrom just announced the opening of a new store which is quite unlike any of its other stores. In the new store, customers would be able to enjoy services like manicures, on-site tailoring.  The store, at ~3,000 square feet, will be puny when compared to any of Nordstrom’s usual 140,000 square feet stores (see Figure 1).

‘It will contain eight dressing rooms, where shoppers can try on clothes and accessories, though the store won’t stock them. Instead, personal stylists will retrieve goods from nine Nordstrom locations in Los Angeles, or through its website. The stylists can also pull together looks for shoppers through a “style board” app.’

And it isn’t just manicures. At the store, Nordstrom Local, shoppers can order beverages from an in-store bar. The store will also serve as a pick-up point for orders placed online. Tailors can help with quick alterations for apparel bought from online channels or other Nordstrom stores. Customers also get personal stylists who can provide fashion advice. Customers can schedule an appointment as well with the stylists.

The reasons for such an experiment are not hard to see. Over the next decade, stores will face more change than they have experienced in the past half century as they race to meet customer expectations. Our research found that shopping has transformed into a chore from the pleasurable activity it once was seen as (see Figure 2).

Figure 2: Consumers see shopping in stores as a chore 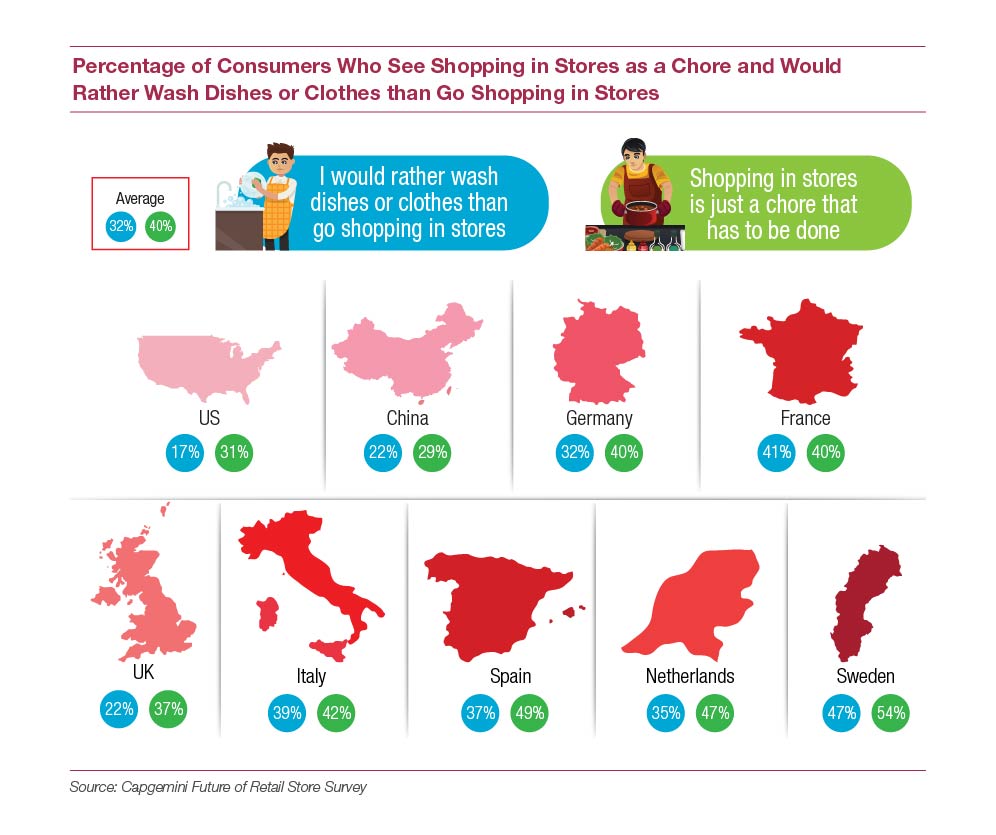 Nordstrom joins other retailers in experimenting with smaller stores where experience is the focus, not the on-site merchandise. Sears had recently announced a smaller-format store for selling only appliances and mattresses. Similarly, Target is also rolling out smaller stores across the US. In Boston, office supplies firm Staples is partnering with a startup to use a portion of their stores as communal workspaces, where subscribers can access desks and conference rooms for a monthly fee. The aim is to drive up store traffic and increase sales. Reebok FitHub stores include a gym to drive fitness enthusiasts into the store.

Retailers will increasingly need to continuously experiment when it comes to formats and experiences as they begin to take on the online e-commerce giants. As Healey Cypher, CEO of Oak Labs, a startup providing interactive fitting rooms, says: “In the post-Amazon era, retail cannot compete on proximity, selection and price—experience is the only way to win.”