There are four distinct types of mobile apps that should be understood before a company starts on a Mobile journey. 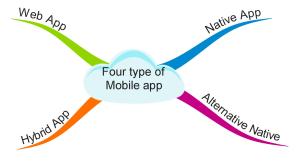 These are typically built using HTML, CSS and JavaScript, and it runs within a mobile browser like Safari or Chrome. Most programmers are capable of building a mobile-based web app like a regular website. Web apps can be made to look good on all mobile devices.

This is the most common type of mobile app found on mobile devices. Typically it builds an app for specific platforms, i.e iOS, Android or Microsoft. Native mobile applications are built using native programming languages such as Swift for Apple, Java for Android or C# for Windows. Native apps use the App stores to distribute the mobile apps like the Apple App store, the Google play store or the Microsoft Store.

This is a combination of native & web apps. It uses the HTML / CSS / JavaScript from a web app and then the HTML runs inside of a container or webview, this container is usually a Native application.

These applications are not built using Native languages like Swift for Apple, Java for Android or C# for Windows. They are built using a variant language like:

Reinventing the IT channel for digital Innovation
automotive

Plug and Charge – An essential step towards seamless e-mobility

Technology that is available today can transform the charging customer journey and greatly...

Digital transformation starts with HOW – humility, openness, and willingness
Show all