Philippe Vié (VP), Marianne Boust (Manager)—Capgemini consulting
On April 5, 2017, the International Energy Agency (AIE) united some 200 energy sector representatives, government members, and digital players shared views about the digitization of energy. The conference aimed at better understanding the implications this process might have on the economy, global energy demand, security, and business models. During the event AIE director Fatih Birol mentioned that the Agency’s mandate had expanded beyond oil markets: it addresses new energy sources like electricity, transportation and renewables, and fosters collaboration with emerging countries such as India. The AIE will publish a study on the topic of digital and energy by the end of 2017, and has consequently launched a series of conferences and workshops, including that on April 5, on this subject.
Digital investments in power grids will amount to $500 billion over the next five to seven years.  These investments will target renewable energy integration, infrastructure security, and overall improved performance within the sector.
April’s conference allowed participants to discuss the potential barriers and opportunities such a digital move could pose for the energy sector. This article will attempt to elaborate the topics covered during the conference and the opinions of some of the major players present.
Lifestyle changes, new consumption patterns, and innovative technologies are turning energy demand on its head. Traditional utilities and energy providers have expressed concern over sustained trends in reduced energy consumption in OECD countries, challenging their business models.
In developed economies, energy demand will stabilize, even decrease, creating a drop in sales for energy providers.
In transportation, three major factors explain the dip in consumption: the electrification of transportation, a shift in car usage (due to car-sharing, ride-sharing, and renting possibilities), and an overall decrease in travel (evidenced by congestion in cities and online buying options).
For buildings, energy efficiency measures are encouraged at every step. Regulatory policies encourage manufacturers to develop products that use less and less energy, such as tablets, TV screens, appliances, and light bulbs. Consumers also call for lower energy bills in a context of rising energy prices. In conjunction with these trends, the concept of a “smart home” that monitors and regulates energy consumption could soon be widely deployed. France’s Electricity Transmission Network (RTE) pointed out that electricity consumption in France is expected to decrease, moving from 479 TWh in 2015 to 471 TWh in 2021.
Another problem for network operators is the intersection of production and consumption. Centralized production is decreasing as privatized companies, individuals, and the service sector develop renewable energy capabilities, such as solar power. They are also being used on an individual level as part of personal energy solutions. This shift has yet to reach a tipping point in France, but it could grow in significance after 2025.
The opposite is true for developing economies. Energy demand in relation to GDP is extremely high. For example, the international organization IRENA predicts that the electrical consumption in Africa will increase 5% annually between 2015 and 2030 .
The palette of applications for digital tools continues to expand as technology improves. The presentations by the various players attending the conference—utilities, oil companies, startups, and network operators—highlighted that digital opportunities in energy were vast and included asset management, network optimization, improved customer relations, and innovative services that go beyond energy supply. In comparison to March 2016’s workshop organized by the IDC  that showed digital transformations starting with customer relations, we observed that utilities agents are prioritizing the digitalization of their operations.
Thanks to recent technological advances, players have stepped up investment in their digital operations. The digitization of operations —“digital industrial”— began about a decade ago with the deployment of smart meters. Recently, there has been a resurgence of interest due to a drop in equipment costs like batteries and solar equipment, and improved device performance through IoT, data analytics, remote communication, robots, AI, and mobility tools. During the conference, the following examples were presented:
• Remote asset control: In 2003, Iberdrola, one of the pioneers in this field, opened a center of operations in Toledo, Spain to monitor nearly seven gigawatts of wind and hydro assets in real time across nine countries. Data collected made it possible to anticipate outages, better control the use of renewable energies within the network, and improve the overall stability of the network itself. These measures have resulted in significantly reduced operation and maintenance costs within the network. Engie has recently announced similar plans.
• Maintenance: According to the Japanese Ministry of Economy, Trade, and Industry (METI), the use of connected equipment to improve grid operation and prevent breakdowns would save 3.3 billion dollars a year on power plants operating in the country.
• New technologies are expected by 2030, with BP citing emerging platforms operated by robots, cognitive information, AI, blockchain, and quantum technologies. These innovations will make it possible to extract 450 billion BoE (barrel of oil equivalent). French transmission operator RTE , already very digital, aspires to digitize all of its electrical substations in France between now and 2030. 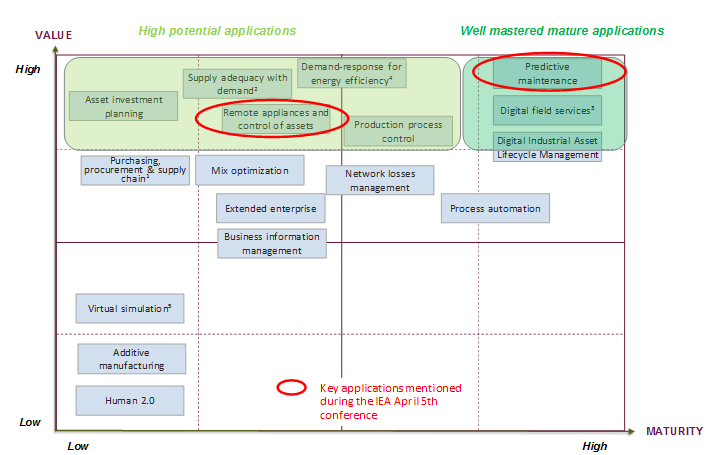 Chart illustrating the value and maturity of digital applications within operations – Capgemini Consulting
The digitization of the customer relationship is already quite advanced, but the experiences generated by each player are surprisingly disparate. In our experience, most utilities companies have digitized their client interfaces with paperless invoices, mobile applications, and self-service. However, this conference showed that certain players were lagging behind on such developments, and even those considered advanced were far below the standards held by other service operators born into the digital era, such as Uber.
Traditional companies will need to integrate startups and newer business models into their strategy. In a survey conducted during the conference, fewer than 30% of respondents felt that the traditional companies, like utilities and petroleum, would lead the way in transforming the energy sector. Rather, the majority of respondents believed that new entrants and business models would drive the pending transformation. For example Tesla’s market capitalization exceeded that of Ford’s at the beginning of the April. It is therefore urgent that traditional players modify and modernize their practices.
In our work on innovation within the sector, we observe that startups are generating these new energy business models that trickle downstream through networks, supply chains, and customer services. Startups face a real challenge when scaling up, and need to use major market players to leverage funding and customer base. Everyone can benefit from such a partnership, provided that the main players preserve the innovation capabilities of the startup in question. Control can be done in many ways, like equity participation through capital funds and joint ventures.
Regulation is a key in securing energy’s digital transformation due to climate protection objectives. This has enormous repercussions on certain energy players. Energy transition implies an increased role for distributed network operations, but the regulators have not yet clarified a control perimeter, leading to tensions between control and the ownership of electrical storage assets, for example. During the conference, speakers highlighted two major regulatory axes:
• Cyber-security: the protection of individual data and external attacks—How can we share data with a large number of operators while maintaining a system’s integrity? In early 2017, the US Department of Energy expressed concerns about the growing risk of cyber attacks on American power grids. It is therefore the role of public authorities to create a framework that will reassure investors of overall data security.
• The constant implementation of pilot projects to stimulate the innovation and development of new skills—On this subject, Germany recently passed a law for the deployment of smart meters for all consumers between now and 2020 and the construction of more robust digital infrastructures as part of their digital energy transition.
Technological innovation is, however, faster than the rate of intervention. Experience shows that regulation must follow market signals closely and react accordingly. If not, one risks creating a gap between technological breakthroughs and slow pilot project processes. For example, the use of photovoltaic technology and individual batteries for self-consumption was not authorized in French grid codes until 2016. This prevented the French from addressing these new markets and therefore put them at a disadvantage, unlike Germany, Italy, and the United Kingdom.
Utilities pioneers in digitalization are well placed to confront the challenges of the 21st century. Most market players understand the scale and the stakes of the sector’s digital transformation and have multiplied initiatives. Those that invested early in both new technologies and business models are now ahead of the curve. As a result, they have already begun their digital transformation and are agile enough to adapt their business and operating models. Examples of players having accelerated their transformation include Centrica and British Gas in the UK as well as Eneco in the Netherlands.

Reinventing the IT channel for digital Innovation
Show all