What is Serverless Computing?

The basic idea is to provide the developer with another abstraction layer to enable API driven creation and management of the underlying infrastructure – in other words server, storage and networking becomes invisible to the developer. When looking at the detail serverless computing can cause some confusion as it might imply no servers are needed – this is not true. Servers as well as other infrastructure related aspects are still needed; it is just that these are being managed and controlled by software without the need to install / start / stop a virtual or physical server, etc.

As referred to in [2] AWS developed a serverless capability called Lamda. In detail Lambda is “a compute service that executes code written in JavaScript (node.js), Python, or Java on AWS infrastructure. Source code is deployed to an isolated container that has its own allocation of memory, disk space, and CPU. The combination of code, configuration and dependencies, is typically referred to as a Lambda function. The Lambda runtime can invoke a function multiple times in parallel. Lambda supports push and pull event models of operation and integrates with a large number of AWS services. Functions can be invoked by an HTTP request through the API Gateway, or run on a scheduler.”  In [2] Peter Sbarski and Sam Kroonenburg’s outlined the concept behind Lamda – to create a serverless computing platform:

For severless to work the underlying infrastructure has to be fully “invisible” and has to follow a Lego © based approach. Invisibility is being achieved by complying with the following 13 key principles: Utility-Based, Software based, Open Standards Based, Virtualised, Service Oriented, Horizontally and Elastically, Fit-for-Purpose, Fully Automated, Lego Based Modularity, Globally Operated, Secured and Fully SLA and KPI cognisant. See here for more detail in [3] 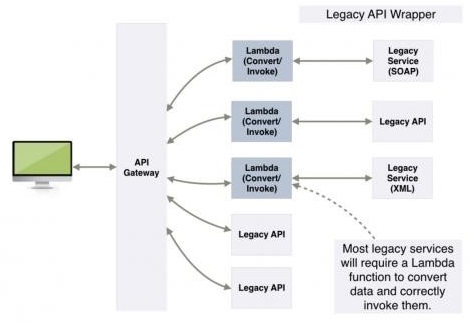 AWS Lamda is basically an abstraction layer between the calling code and the actual provisioning of infrastructure services. Using an Lamda API (application programming interface) the requestor will invoke the necessary Lamda functions in a stateless fashion to execute the required function. Note that Lamda is stateless and if stateful is neeed the services like S3 or DynamoDB will be required.

Why is Serverless Computing needed?

The idea of “No Ops” as well as “only focus on developing functionality” has been around for a long time. Solutions like IaaS as well as PaaS have addressed some of these aspects. However only when software and infrastructure patterns converged has it been possible to allow developers to just develop code, to compile it and to simply upload without having to have a black belt in bash or puppet.

The drive of serverless computing is fuelled by the digital agenda ; to build and consume a compelling digital platform – featuring APIs, open datasets, service catalogues, integration, frameworks, solutions guidance, tools and collaboration support; it will enable businesses to quickly create their own, market-focused solutions while leveraging enterprise grade information and services and without having to get “hands on” with infrastructure.

What are the advantages?

In both models there are several advantages :

What are the disadvantages?

In both models there are several disadvantages

About the Author: Gunnar Menzel has been an IT professional for over 25 years and is VP and Chief Architect Officer for Capgemini’s Cloud Infrastructure Business. According to Richtopia Gunnar is one of the Top 50 most influential Information Technology Officer. His main focus is business – enabling technology transformation & innovation.

Looking to improve business agility? Start with a move to cloud security
cloud

Maturing DevOps on Kubernetes
Show all