Big Data Analytics have not only been a hot topic for the past few years but also have been transforming a wide variety of industries in interesting ways.  In the public health sector, analytics has been playing a vital role in addressing public health issues and disease research. Recently, during the outbreak of the zika virus, social media, transportation and weather data, among other indicators were used to model the occurrence of the disease.

In this post, I would like to share my experience on how Engineering & Big Data Analytics have been used to develop smarter tools for infection disease control and modelling.

The Fight to eradicate Malaria

Thanks to an increase in global funding, a great progress has been made in reducing the morbidity and mortality rates from malaria. However, each year over 400,000 people – most of them children, will still die from the disease. With more than 3 billion people at risk around the world, optimisation on public health efforts and innovative ways to combat the disease are certainly required.

Big Data Analytics for the prediction of malaria outbreaks

Current advances in technology have allowed gathering data from disease monitoring that would have been taken years to collect a decade ago.  For example, researchers have coupled “big data” from mobile phones with regional malaria incidence information, to understand how human travel patterns contribute to the spread of the disease.  Another study combined confirmed malaria cases and metrics on healthcare use, to build a Bayesian spatio-temporal model that predicts malaria incidence. The model was used to estimate clinical burdens and to identify areas and seasons that can be targeted for improved surveillance and interventions.

Companies such as IBM have also joined efforts to help combat infectious diseases in real-time by analysing social media, transportation and weather data. Their models look at how changes in local climate and temperature affect the spread of diseases ( such as dengue fever, zika and malaria),  information that can be then used to predict where the next outbreaks might be.

Microsoft recently launched an initiative called Project Premonition, looking to provide remote monitoring with drones. Since the 1950s is been common practice to use mosquito traps ( that are first  hanged in trees and then collected manually) to catch mosquitos for research studies; the idea of Project Premonition is to send portable drones to do the same job and analyse the diseases the mosquitos are carrying before they infect a significant number of people. An ambitious project that if successful, will help getting advance warning of a potential epidemic with multiple benefits for  public health officials.

Insecticide-treated bed nets are a safe, simple and affordable tool that have contributed to the reduction of malaria morbidity and mortality rates. However, very little is known about how mosquitoes interact with nets or how nets do their job so effectively, or how they can be modified or improved.

I was fortunate to work on an amazing project* where engineering & big data analytics came together to develop a tracking system to follow individual mosquitoes.  Traditionally researchers have only observed mosquitoes as they tackle the various barriers humans set up, including bed nets.  Whilst useful, this often provides a limited picture of how the insects approach the nets and their detailed behaviour.

The system we developed combined infrared video tracking technology & big data analytics to capture and process terabytes worth of high resolution images of mosquitos in flight.  We develop the algorithms such that we can detect mosquitos flying in the dark and track their movements around and in the actual bednet. The system was deployed in Africa, where we recorded mosquitos in their natural habitat, as they try to approach a human sleeping inside a bed net. Over 50,000 of mosquito flying trajectories were extracted and analysed so we were able to obtain insights on how mosquitos interact with bednet and insecticides and characterise their flying patterns. Bednets are currently the most important tool for preventing malaria transmission and the findings potentially could influence many aspects of mosquito control, ranging from how we test mosquito populations for insecticide resistance to the design of a next generation of bed nets. 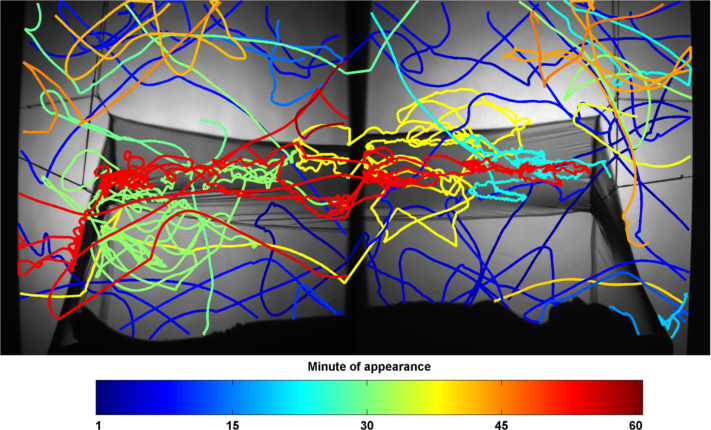 Figure 1. Flight tracks of mosquitos around a human sleeping inside a bed.  The tracks are colour-coded according to their first time of appearance. The tracking system can both record and extract detailed mosquito trajectories around and on top of the net. Mosquitos can be seen repeatedly jumping on the bednet surface.  *

These are all great examples of how engineering & big data analytics are contributing to lead a new age of science based, data-centric development of disease control tools and modeling. By understanding how and why these diseases spread, how insects interact and respond to different  treatments, public health officials can identify high risk regions and focus efforts on specific interventions in locations where they can have the greatest impact. All these efforts will for sure continue to save lives  and contribute to the aspiration of eradicating malaria during the next decade.

*This research was carried out at the University of Wariwck and the Liverpool of Tropical Medicine, supported by the European Union Seventh Framework Programme FP7 (2007 – 2013) under grant agreement no. 265660 ‘AvecNET’

For more details of the tracking system and insights: