So what phone did I have you ask? It was a Windows Phone (yes, you can stop snickering now), the Lumia 830 if you want specifics; the last one branded as Nokia. It runs the Windows Phone mobile client OS that was originally released in 2010, as follow-up to Windows Mobile (formerly PocketPC). While Windows Mobile was very Microsoft-oriented in terms of connections and user interface, the new Windows Phone OS was developed from the ground up with the capabilities of modern smartphones in mind and a more universal (think cross-platform) look onto the world. This new OS arrived very late in the game, because competitors Android and iOS already had well developed operating systems for modern smartphones at the time. The advantage of arriving late though, was that Microsoft had a chance to take all lessons learned from existing mobile operating systems, and develop a whole new user interface taking all this into account.

I have always found the iOS user interface to be cluttered, with a plethora of different looking icons on your start screen. The Android interface has the same issue and was still rather clumsy around 2010 (although much improved since then). In comparison, the Windows Phone’s interface of tiles is clean, structured, intuitive, and you can get to any setting or application really fast. Also the so-called live-tiles are far superior to any widget I’ve seen on an Android phone, because of the way they fit and blend into the overall appearance. Add to that the flawless Exchange, OneDrive and Skype integration, and you get an almost unbeatable mobile digital workplace in terms of productivity. 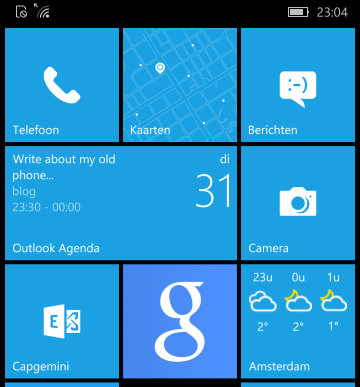 Why abandon my phone then? That had everything to do with available apps and app support. So how did this happen? Well, do you remember the VHS vs. Betamax format war in the 80s? Or more recently HD-DVD vs. Blu-ray? SD-card vs. Memory Stick? Super Audio CD vs. regular CD? My point is: the best platform doesn’t always win. If another product gets better marketing, a better image, better distribution channels, more resellers, then an objective comparison of features and usability doesn’t have to be all-decisive. And at some point if you drop below a certain market share, the battle is lost. This is exactly what happened with the Windows Phone – for a large part I should say because Microsoft was so late in the game, and the competition had already cornered the market.

As a result nearly every company or event organizer that was building a new mobile app, made the decision to only create a version for Android and iOS, because the limited Windows Phone user base didn’t justify the cost of an additional version. There still were many Windows Phone apps of course for key applications (mobile banking, Facebook, Twitter), sometimes sponsored or even created by Microsoft, but often these were updated less frequently and had less capabilities than their (better looking) Android/iOS versions. And then over the last few years, when Microsoft basically stopped investing in phones and the Windows Phone OS altogether, focusing more on Windows 10 and the Universal Windows Platform Apps, many companies even dropped support for their existing Windows Phone apps. It was a hopeless downward spiral.

So what does this tell us about digital customer experience in general? Most of all, although user experience is important, it’s not the whole story. You may have an app or a site with a slick look & feel and the best usability around, but that’s just the storefront. Important as that is, if you don’t back it up with proper marketing, image-building, good distribution channels and continuous updates, you are unlikely to succeed. In a market that is becoming more and more digital and global, keeping both the storefront and all surrounding processes in shape takes considerable effort and attention.
And as the Windows Phone example shows us, you also need to act in time. A great digital user experience is important, but that by itself is not the killer feature that will lure customers away from one of your competitors. Gaining market share (or preventing market share loss) if you arrive late in the digital game is going to be tough.

To run true cross-channel campaigns you have to make sure that you don’t just collect data,...

A common mistake that must be avoided in enabling the adaptive marketing organization is to...