Social media analytics is a fast growing field within data science. The advance in social media gave rise to an entirely new era in digital marketing. Understanding how people interact and how brands engage with consumers using different channels on social media is both challenging and exciting. Selecting influential people to endorse a brand and act as an ambassador to that brand for a campaign is a key step in digital marketing. However, it is not just identifying influencers that is important, but also the ability to validate them by predicting the success of influencers selected prior to the start of a campaign.

In order to validate an influencer for a campaign a brand needs to identify one first. So, what questions does a brand need to ask in order to select an influencer? Well, first and foremost the brand needs to understand the target market – that is, the types of people for whom they wish to engage. The target market is often characterised by demographics, such as: age range, gender, and location, but also, and more importantly by the audience interest. Once decided upon, the brand then needs to identify influencers that engage with and are able to amplify the conversation with the target market. At this stage the brand would also need to identify the channels for which the influencer should engage its audience.  At Capgemini, we provide support for identifying and validating influencers across multiple channels. 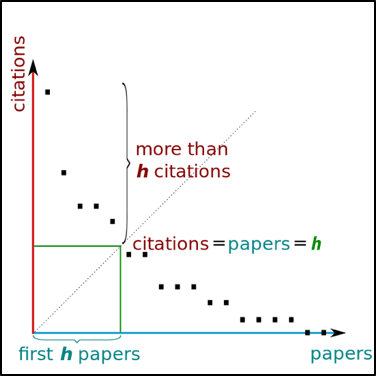 There are numerous engagement metrics that can be used to validate the performance of an influencer for a campaign such as followers’ growth/retention rate, network reach, clicks, likes, etc. However, for an initial screening, the brand would rather have a single, comprehensive metric that will allow them to filter the potential influencers down to a manageable number. Here comes into the light the Social Media H-index. I have created this index by adapting an engagement metric from the sometimes less social, academic network. Its fundamental underpinnings are based on the h-index[1] used by the scientists and scholars as a measure of their level of productivity and impact of their publications (Figure 1 – Academic h-index, showing number of citations decreasing with number of papers).

“A scholar with an index of h has published h papers each of which have been cited in other papers at least h times”.

This metric has been applied to Twitter to measure the engagement of the influencers tweets. So how does the Social Media H-index work for Twitter? Well, let’s take the influencers last 200 tweets and calculate the number of retweets for each tweet (Figure 2 – Social media H-index applied to Twitter). Next, let’s identify the H tweets that have been retweeted H or more times, this value is your H-index. 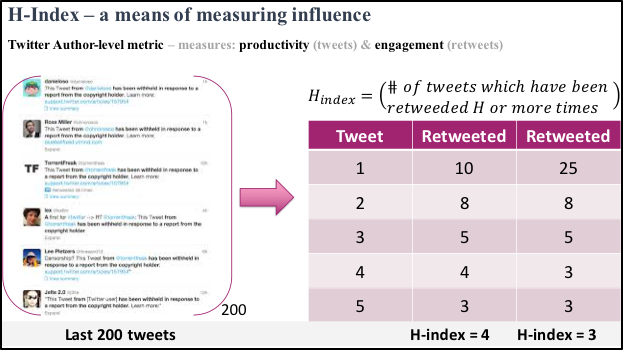 This metric has been successfully applied across numerous campaigns and acts as a quick screen to validate influencers and their engagement. It acts as a benchmark indicating to brands how selected influencers would potentially perform in future campaigns before they begin.

The main advantage of H-index is its ubiquitous applicability. It can be used on any social media network with your engagement metric of preference.

Table 1 below, illustrates sample influencers and their corresponding H-index on Twitter.

Travelling to distant stars – a thought experiment
Show all