Despite the occasional apocalyptic warnings, I think most people would agree that the potential for Artificial Intelligence and Robotic Process Automation to help us innovate is fantastic. Used wisely, it could become a valuable support to human ingenuity. Advances in machine learning and automation may soon see this technology replicating some quite human qualities in business, improving our analytics capabilities and accelerating our own thinking.

At a practical level, where could we start to apply this to business processes in the near future?

Well, maybe we could learn from the automotive industry and their old, instantly recognisable friend, the crash test dummy. When it came to improving the safety performance in cars, there was no substitute for repeated testing and measurement. The vehicles and the dummies inside them were crashed, crushed, dropped and rammed in almost every conceivable way, while the engineers monitored their behaviour under these conditions.

This eventually led to all sorts of discoveries that fundamentally changed the way cars are designed and saved countless lives – some of them quite unexpected.

AI and robotics could allow us to replicate this crash test dummy approach for all sorts of business process scenarios. I believe this could really speed up and enrich innovation in the way large organisations are run, just as it did so powerfully for vehicle safety. 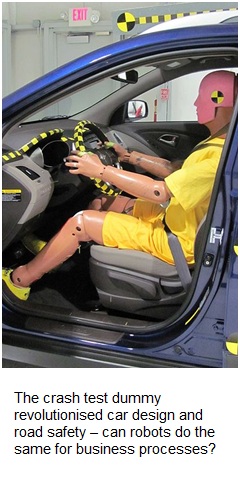 Innovation always involves balancing the possible rewards with the risks of failure. We’ve all heard the innovators’ mantra of ‘fail often, fail fast’, but that’s never been an easy sell in a large enterprise. While the consequences of failure can often be highly instructive, most people aren’t exactly free to fail often in their jobs. That’s one of the main reasons we’re told that entrepreneurial thinking tends to die off in large organisations.
What if you could create a virtual environment where it’s possible to simulate new processes and new ventures and see how they play out, before committing more time and resources? It makes good sense for a crash test dummy to take the hit, instead of gambling your career on a daring idea from left field: let’s fail often and fail fast, but where possible, let’s fail safely and virtually.
Of course, we’ve had some crash test dummies in place for some time, in the form of business process modelling tools and, more recently, powerful predictive analytics. However, the scale and sophistication of AI could soon create a new generation of tools that will make these look rudimentary.
Not only that, but I believe these tools can become easier to use and faster to deploy, which is key to large organisations being able to harness their potential.

A boost for original thinking

We’ve been running with this idea of rapid prototyping for some time through a test and learn approach in our Innovation Labs. The thinking that happens in these collaborative innovation sessions can range from proposals for incremental improvements to quite radical changes in strategy. Both ends of the spectrum could probably benefit from faster and smarter robotic help.
Nevertheless, the importance of getting people round the table to discuss their challenges openly and imaginatively will not be lost. Humans are still much better than machines at providing those sparks of originality or counter-intuitive bright ideas that are the real game changers in business.
The right approach should simply free people up to pose more of the brilliant ‘what if?’ questions and let the robots suffer the consequences.
If this could have as many positive effects on business process design as the invention of the crash test dummy did for cars, we can look forward to a much more exciting and innovative, but less risky future.

Capgemini’s HotDesk tool gives our teams the confidence to return to the office safely and...