What does disruptive technology actually mean and who is driving these disruptions? Does “disruptive” mean complex? Or chaotic? Or “instant success” – Or all of the above?

As I noted in my previous blogs (see here and here) the term disruptive was first created by a Harvard Business School professor Clayton Chrisensen back in mid-1990. He co-authored an article “Disruptive Technologies : Catching the Wave” as well as wrote a book “The Innovator’s Dilemma” where separated technology into two categories : sustaining and disruptive. There are many other views on innovation of course – there is some great material here : http://ec.europa.eu/research/index.cfm

Looking back there have been numerous examples of successful as well as unsuccessful disruptive technology advances (innovations). As an example the pager was an innovation that has pretty much disappeared from the normal “application”. Back in 1990 – 2000 it was pretty cool to own a pager and many did – (incl me).

However, with the advent of a new innovation – the mobile phone – the pager was soon pushed out of the day 2 day life of many of us. Why having a mobile phone, that supported SMS and a pager? Motorola, who once lead the pager market, decided in early 2000 to seize production. And that sealed the fate of the once must have gadget. Today pagers are only used in very specific applications.

Closer to home the SatNav is another tool that seems to slowly disappear again. Even 5 years ago it was the tool to use in your car – everyone had one and many vendors made good money selling the devices as well as the required regular updates. And today? You use a smartphone. Why using and keep updating a SatNav if you have a smartphone? There are plenty of free or “nearly” free navigation apps that make use of the GPS and 3G signal of your smartphone. 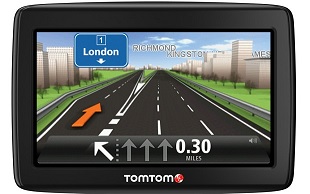 Disruptive technologies can impact existing technology – for instance look at the impact the internet had on the printing industry. Many big publishers incl newspapers had to either adapt or left the market altogether. Many saw the impeding disruption either too late or not at all. Below an overview provided by the Newspaper Association of America: 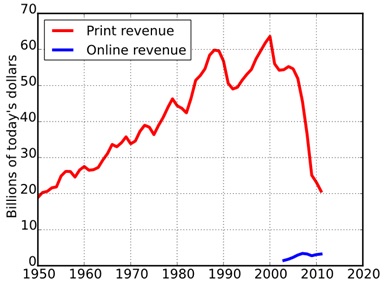 As an example The Ann Arbor News (US based paper) started to publish in 1927. It grew out of a long line of newspapers with frequent name changes including the Ann Arbor Times, Daily Times News, and Ann Arbor News. The paper was major daily newspaper and ceasing publication in July 2009. Other examples Capital Times, Birmingham News etc.

On the positive side, there are of course numerous publishers who adopted / embraced the internet revolution, continuing their cooperate success by including disruptive technologies in their business model, rather than ignoring it. Most of the newspapers that stopped publishing on paper moved in 2008/2009/2010 to online only (and most likely reaching far more readers than before).

Now disruptive does not necessary mean that it replaces other existing technologies. New inventions can become disruptive when the resulting “business application” enable a new opportunity or a complete new capability; something that was not available before. From a technology perspective there are a number of key disruptive technologies – mobile phone / smartphone; wifi; Internet of Things (IoT); constant increase in speed and capacity (CPU, RAM, Network, storage), fingerprint recognition, autonomous vehicles, 3d printing, cloud are only a small number of technology advances that disrupted and that will disrupt the market, companies and society in the future.

Trick of course is to recognise and distinguish between the pager and the smartphone – to identify which invention or innovation will stick and which one with disappear again. Robert H Goddard, inventor of the world’s first liquid-fueled rocket, once said : “It is difficult to say what is impossible, for the dream of yesterday is the hope of today and the reality of tomorrow.” I have been in the IT sector now 27 years and one thing is clear to me “change is the only constant” and my role is not to use a crystal ball to predict what will stay and what will disappear, but to enable the change.

Who is driving these new inventions? Who is pushing these into the market? The companies like Apple, Google, Microsoft? Sure, they are the ones who develop and provide the new technologies that we all use and apply. However companies are not the ones with their foot on the innovation pedal – it’s You.
Customer centricity and the related consumerization is the key driver today.

Companies have to adopt and adapt to a constant drive in consumerization. As we outlined in our 2015 Technovision edition, consumers are at the heart of everything. We believe that there are 5 key principles that drives the consumerization – we call it “You Experience”:

You can read more about our view on our Website : https://www.capgemini.com/blog/cto-blog/2014/11/welcome-to-technovision-2015

Companies who ignore user centricity will have to (at best) follow the market. However companies who embrace it will grow and flourish.

Good example is the insurance sector. In our annual Insurance World Report (see here 2015) we noted that globally 70% of insurance customers are unsatisfied with their customer experience and many customers switch to new insurance companies (like carrot etc) who deliver a better end user experience. So it is key for Companies to embrace change; to understand the power of digital – see here some brilliant reading material : https://www.uk.capgemini-consulting.com/digital-transformation