Recently, Marc Andreessen, the founder of Netscape and now running the venture capital firm Andreessen Horowitz, started a big Twitter debate on role of technology on areas like productivity, wages and resultant innovation. A sample of the tweets is captioned in the figure below. 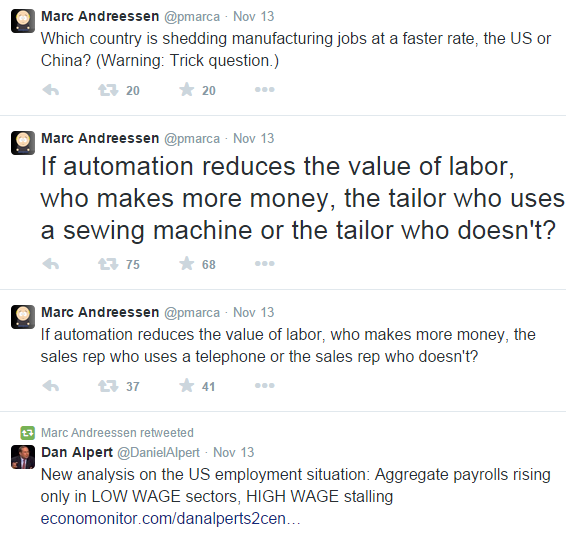 This made for fascinating responses and arguments. It was surprising to note that several individuals, as do several policymakers in the West, believe that technology improvement results in loss of jobs and / or reduction in wages. And that there was no real link between technology and rising productivity to workers being better off.

This set me thinking about the Indian situation and delivery of public services. India is besieged with low productivity of public services, alongside high leakages and corruption and poor accountability. By the arguments several individuals came up with, technology should actually make the matters worse rather than improving them! Clearly, that does not seem right.

The ubiquitous consumerisation of technology in my view has a potential to fundamentally transform the way delivery of public services in India. While the problems India faces are huge, this is also a wonderful opportunity to completely disrupt the status quo and bump productivity exponentially. In this context, technology spans a range of areas – process digitization, e-governance, mobility first focus, Internet of Things, analytics, robotics and alternative media channels for improved two way communication.

There are five fundamental ways in which this collective superset of technology advancements can improve Indian public services.

Accountability
Be it about resource allocation or beneficial targeting or simple reporting of impact and returns on investments, Indian government policies have far too long been hostage to the measurements coming from empirical or worse anecdotal non-rigour. It is not that the government policies don’t work – it is just that the welfare impact can neither be isolated, nor quantified.

This is an area where improved processes and data driven governance can play a huge role. Collection of data, making it available via cloud storage and through easy to access web or mobile apps, can lead to better understanding of the governance policies and their end impact.

Entitlement
Another area of improvement for governance is deciding who should get what benefits, such that there are no overlaps, as well as no exclusions. In a country where there are no national identification cards or IDs, this can be a tough task. Even with identity established, the entitlements across departments or government plans or targeted programs can overlap. There can also be overlaps between central (federal), state and local government plans. The clear identification of entitlements and the time duration of benefits percolation is another area where technology has a role to play – especially analytics.

Identity
This is the biggest area of leakage in India’s targeted social plans. Since India never invested in a Social Security or National ID infrastructure, there are problems like illegal migrants claiming benefits which should only be available to citizens. These range from voting rights to public distribution system of food grains and tax IDs. Lately, the government has tried to segregate the citizenship status from the residential status via the use of Aadhar cards.

The Identity conundrum, if resolved, can tremendously help in areas like healthcare delivery, housing benefits and food security benefits. This area is ripe for technology disruption – the Aadhar system already uses biometrics. But the ability to read and interpret biometrics at the point of service delivery is still missing. Same is the case with the use of measurement metrics via data analytics.

Identity also helps in better direct benefits transfer. Today the government subsidies across a range of areas pass through government or quasi-government bodies, where rent seeking and leakage is common. Cash benefits moved directly to beneficiaries can plug leakages, which would save the government extra expenditure.

Opacity Reduction
Transparency is at the heart of trust when it comes to public services. This is an area where the government has already taken initial steps on e-governance and mobile friendly access and reporting. If the tracking and oversight is moved to mobile, which in India is growing at unprecedented rates, the visibility of how citizens interact with government departments and systems can improve drastically.

Imagine gathering real time data on crop patterns, irrigation effectiveness, power situation, vehicle density or road connectivity from remote villages. These are real infrastructure bottlenecks in isolated parts of India which are naturally difficult to access. An Internet of Things grid across a range of sensing and monitoring devices can make it easier for the nodal government agencies to understand citizen problems and challenges. This can also help in adjusting allocation of resources.

The last level of service delivery which happens via local bodies in villages and small towns, can also involve robotics and intelligent kiosks. These devices or entities can also be monitored for effectiveness.

Overall, the government should look at technology as a transformation enabler, not an incremental addition to the ecosystem. This will definitely improve not only the productivity of services, but also better use of scarce tax money and government resources. India is at the cusp of a range of changes, and technology can propel the country in the right direction at a faster pace. I hope the government sticks to the views that Marc Andreessen upheld on his Twitter feed, rather than looking at what the naysayers had to add.

An interesting and related aspect of this discussion is that this topic will be addressed in the final episode of Capgemini Supertechies Show, which will air later in November. The challenge for the final is about using a range of technologies to improve governance in India. I am eagerly looking forward to watch that final episode!

A new approach for financial services

In the ecosystem model, financial services will be embedded in customer journeys. While banks...

Data is a value driver, not a cost driver

The case for shifting the paradigm in Financial Services

Data is a value driver, not a cost driver
data

FHIR implementation is more than a regulatory tick off item!

The health plans will do well to recognize that the scope of FHIR is more consequential than...

FHIR implementation is more than a regulatory tick off item!
Show all