In general the idea is that on the database server multiple R engines will be spawned and will work in parallel to execute the computations needed. Depending on your programming the results can be stored in the database, can be given to a workstation or can be sending to a Hadoop cluster to execute additional computations. As an addition to this, due to the Hadoop connector R inside the database server can potentially also make use of data inside the Hadoop cluster if needed. From a high level perspective this will look like the diagram below. 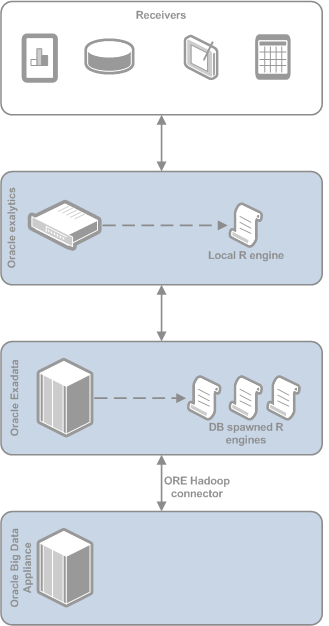 In the above example diagram the deployment is using Oracle Exadata, Oracle Big Data Appliances and the Oracle Exalytics machine. By combining those you will benefit from both R and from the capabilities of the Oracle Engineered systems. When you are in need of deploying R for analytical computing and you are also using Oracle databases and applications on a wider scale in your IT landscape it will be extreemly beneficial to give Oracle Enterprise R a consideration and depending on the size of your data to combine this with Oracle Engineered systems.