There is a tendency to preserve games as not adding to the health of people playing. A common view on people playing games is that of a male up until his mid thirties who is obsessed by the game he is playing and who is spending an unhealthy amount of his time behind the computer screen of game console. Regardless of the studies what gaming might or might not do with the minds of young players the overall, biased, view is that gamers do tend to have a lack of outdoor engagements.
Overlooked by studies and people who try to form an opinion about gaming are games like Ingress and the like. Ingres is a social mobile game which forces players to go outdoors. The overall idea behind Ingress is that the world is divided in two secret factions who fight over the control of portals. The differentiator Ingress introduces is that you have to physically visit the location of the portal which is mapped in Foursquare like fashion. When visiting a portal that is part of your faction you can enforce the defense and in case the portal is owned by the opposing faction you can attack it and try to take it over.
The way Ingress is played forces players to take the bike or walk into the city or even rural areas to visit portals. The amount of kilometers walked is even displayed in your score. By putting a game layer over the physical world and enforcing Ingress players to go out and play the game it shows that not all games are purely played from behind your screen but computer games are finding their way into the real world and are played on the streets. 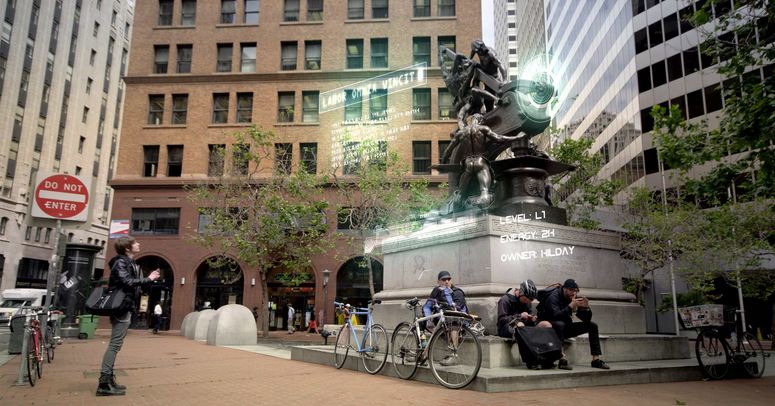 The trend we witness shows that Ingress type of games are an upcoming trend and might in the future even be integrated in Google Glass like devices. This would mean that, where you currently need a handheld device a game will be played in a massive online fashion be delivered right in front of your eyes. This also makes that the line between gaming and reality might become even more vague. Where it was clear that packman was not real games become more and more real on the screen and currently not only indoors but also outdoors. Removing the need to hold a device and play a game projected as a layer over the real world in front of your eyes will ensure a complete new experience.
We have already seen some attempts to this goal where the game industry is suing augmented reality as a layer however nothing yet that has been picking up in large numbers. The general idea is that when Google Glass will become available we will see more game companies dive into this new line of gaming, and yes, maybe even Ingress or a likewise sort of game might be played by using a Google Glass like device. A good example of what the future of outdoor gaming in combination with Google Glass like devices can bring is the concept video for the game Battlefield 5 based upon the Battlefield game series developed by DICE and EA. This might very well be the future of gaming in the upcoming years.

The unique demands of the pandemic and climate crises are transforming the public sector,...

Capgemini’s Digital Customer Operations suite of offers is helping our clients deliver a...