We talk about being ‘online’ in 2014 with a level of nostalgia not seen since the early days of Hollywood ‘talkies’ yet, what do we truly mean by this today?

We can now fit cameras and computers into a single cubic millimeter which equates to about 30 for each character of text on this blog (unless you have a 60inch widescreen monitor of course!). The possibilities going forward are as astounding (hence the enormous hype at present with IoT) as, I’m afraid, are the challenges in harnessing this potential consistently, ethically and for the betterment of mankind.

Clearly, we are not talking about dial-up and web browsers rather, about mobile, apps, the ‘business data lake’ and cloud. If this is not evolutionary enough for you, a revolution is coming and it will take less than a decade to complete.

According to Cisco, in 2008, the number of ‘things’ connected to the internet surpassed the global population for the first time. By 2020, there will be 50 billion interconnected devices on the internet globally, and by devices, I do not mean just phones and tablets but everything from cars to medical monitors and from wearable smart jewellery to home device automation. Therefore, being online will now require more structure and inter-operability than every before.

Reaching out, touching you, touching me? Machines are next!

The internet of the 90’s needed to go through iteractions of web standards (Web 1.0, Web 2.0 etc) to standardise how we view, share and collaborate with information. The momentum over the next few years, needs to consider how connected machines will interact with one another as a global neural exoskeleton.

These ‘Web 4.0’ interactions will focus on machine to machine (M2M) ‘contextual reaction’ to simplify and improve our daily lives and, one would hope, to ultimately reduce our impact on the environment.

Everybody wants to get connected but we don’t know how

This current paradigm shift will require a massive consolidation, regulation and standardisation of mobile devices, cloud and web application providers, sensors and of course the security and privacy issues associated with pervasive ‘smart technology’.

Unlike the early 90’s, smart device evolution and necessary internet and device standards are developing in a manner reminiscent of the ‘Blu-Ray and HD-DVD’ high-definition format wars; this is only going to delay the IoT evolution further.

I recently installed a smart home thermostat and alarm system in my home. They both work perfectly and come with their own IOS applications but, are using different standards and sensor technology communicating on an IP-based network. Why is this an issue? Well, what if my heating system went into overdrive and started to rise to dangerous levels? Wouldn’t it make sense to automatically trigger the (separate) house alarm system which at present is linked to the emergency services and household mobile phones? If I remotely disable the alarm shortly before arrival, shouldn’t the heating fire up in anticipation on a cold day?

The fact is that smart devices become powerful when they can interoperate based on consumer needs; this future capability requires alignment of vendors and standards now rather than vendors vying to buy, build and win the smart device market outright (just look at Google’s acquisition of Nest as an example).

We are predominantly reactive today when it comes to online security breaches (such as payment and personal information fraud) yet, in the future ‘Internet of Things‘ could we truly operate in the same manner when, the device being hacked is an individuals ‘smart’ heart pacemaker? I think not!

As we approach the tipping point of disposable pin-sized computers and sensors, we have an global obligation to structure our future internet into a more proactive, intelligent, interconnected and safe environment not only for people who use it but, for the devices which will outnumber them 4:1 within the next 6 years.

34036 Internet Addresses covers our children but what about machines?

I know kids seems to be connected in a multitude of ways these days but, in all seriousness,  technically, we are gearing up for this evolution nicely.

Furthermore, our mobile movements between home and work are increasingly monitored (From Nest to IOS in the car and beyond), the continued expansion of GPS and GIS location tracking and mapping shows no signs of stopping (from Google Maps to TOMTOM and beyond) and, the accelerated evolution towards mobile processing (Mobile payments evoution, mobile biometric security, NFC communications, Bluetooth and of course digital currency .i.e Bitcoin) is relentless.

Taking a swipe at the ‘Internet of Things’ hype?

So, why has the internet of things not arrived yet? I believe it is for the following reasons:

With the emergence of a new architecture for IoT, our current internet (affectionately called the ‘Big I‘ with massive numbers of sender/receiver movements between complex computers and devices) will be segregated from a new ecosystem of sensors at the edge of the network.

These lightweight and disposable sensors will send smaller, intermittent and less critical ‘sender’ movements of measurement data (known as ‘Chirps’ as an analogy of how birds communicate to a specific audience with simplicity and efficiency) back into the mainstream internet as represented in the diagram below: 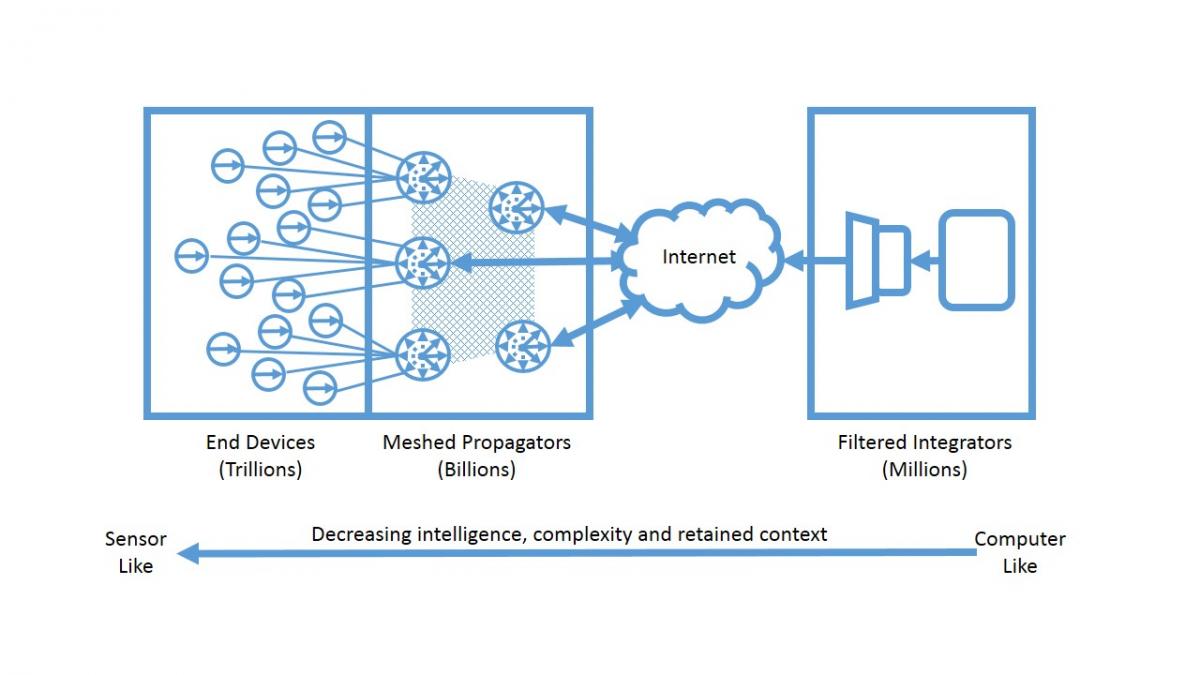 Derived from ‘Rethinking the Internet of Things: A Scalable Approach to Connecting Everything’ by Francis daCosta

As these messages are received at ‘Propagator nodes’, they are ‘pruned’ and broadcast to more complex ‘Integrator nodes’ based on a set of simple rules. The integrator node is more akin to our current internet-based computers and mobile devices as they can analyse, filter (as the incoming traffic is MASSIVE) and interpret these messages to deliver context to a target machine, sensor or human.

This whole sequence of events occurs with no human intervention and, in the future, we are likely to have at least 1 integrator function in every household in the world (in fact some argue it could be 100’s of such nodes in the future modern home).


So will the Internet of Things ever happen?

There are a lot of sceptics out there that believe we will never be able to develop global standards for interoperability on the scale IoT suggests and, they may well be right. Despite key industry critics such as the former Apple executive Jean-Louis Gassee citing IoT as the current ‘basket of remotes‘ problem,  I personally think it is only a matter of time. 2014 may not be the year in which it happens but, it could be the year in which IoT gains momentum.

Ten years ago, nobody believed we could standardise telecommunications and mobile applications and, whilst we are by no means there yet, we now have global standards in the form of 3G and 4G plus the mobile machines that are Android and IOS. Furthermore, huge ecosystems are building around these mobile models which, with the increasing emergence of HTML5, means that future platform development and integration will only accelerate.

Recent ‘smart’ developments such as Nest and Tado (smart home automation through your smartphone) and of course, wider smart monitors in the utilities and energy sector suggest that we can collaborate and standardise device interoperability for specific verticals and target consumer outcomes.

The question is, can we continue to connect and extend these different ecosystems whilst integrating smart devices in a way we have never seen before?

The impact of COVID-19 on online grocery shopping
Show all