I began my career at Capgemini in June of 2013 for what I thought was going to be nine weeks of learning how to maximize my potential in the consulting practice.  I quickly learned that having the chance to work in this opportunistic industry comes with the tradeoff that one must be very flexible.  After my initial two weeks in Atlanta there was a chance a group of us would be 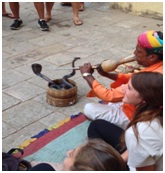 transitioned to a new role in the company and may not have have the opportunity to travel to India; however, upon returning to our home office, three of us from the June class were told we would still be traveling to India in two months with the August new hire class.
In the months prior to my trip to India, I sat in my home office of Houston and tried to do as much as I could to network with my coworkers and help out. From working on pursuits to building reports for various managers that needed assistance, it seemed as if India, where I could begin practicing with SAP, could not come soon enough. Yes, the other firms all have an offshore team that people in the United States continually work with; however, Capgemini is the only firm that gives its new hires a chance to meet and learn from its offshore counterparts.
Once in Mumbai, the three of us joined the campus hires out of the August class and I immediately knew that my coworkers and I all shared the same anticipation and excitement for this once in a lifetime opportunity. We worked 9-6 every day, as we would do in our home office, learning more about our specific service line in the company and what we would actually be doing when working with clients. Starting with Capgemini, I didn’t know much about what SAP was and what role I would have in the technology consulting practice; however, by the end of the training process in India I was able to gain a grasp of what SAP is and all that it has to offer. 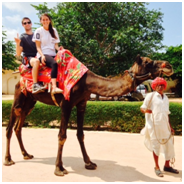 When my friends and family would ask what we thought of India, I would literally sit and ponder how I could ever possibly put my experience into words and frankly I still can’t. Capgemini’s Global On-Boarding Program is something that I will never experience again and most people will never get to experience in their lifetime. Not only is it a culture shock for anyone living in the United States but India has so many things to offer outside of life at the office.

The first weekend in India our group decided to start the trip off with a bang and travel to Goa, which is India’s famous beach town in the south. We took a 16 hour bus ride (originally supposed to be 9 hours) each way to save money (safe to say we definitely weren’t lacking any bonding time). We were able to rent scooters for the day for only $3 USD and attempt to drive them around the chaotic streets of India as well as lay on the beach and watch the sunset. The second week we all traveled (by plane this time) to Agra and New Delhi to see the Taj Mahal, a necessity when traveling in India, and attempted to haggle our way to good deals at the local markets. The third week was by far the best weekend in our attempt to immerse ourselves in the Indian culture. We rode elephants up the side of a mountain, had a quick ride on a camel, and even attended a monkey temple (which is exactly what it sounds like).We were fortunate enough the fourth week to participate in Capgemini’s Naandi Foundation, which provides different resources to children and their families that are not able to afford them.

We spent the afternoon visiting houses, which were no bigger than 10 feet by 8 feet and are supposed to fit families of five.  It was an eye opening experience that once more helped put in perspective our lives in the United States and that was something I will never forget.After my experiences throughout Capgemini’s On Boarding process, there is no other company I would rather work for out of college. There are still so many memories and experiences we all shared in India that I could not possibly do justice putting into words. I hope everyone reading this blog post gets the same opportunities with Capgemini that I did because after spending nine weeks abroad with a group of people, they become less of your coworkers and more of your family.
Good LuckDrew

How to liberate your legacy applications to unleash powerful, agile next-gen apps
careers

New learning opportunities that beckon in the Digital World

Learning has become much more personalized and collaborative

Gender balance and the equal representation of women in Insights & Data

Firms that maintain gender balance are able to attract and retain high performers. Read this...