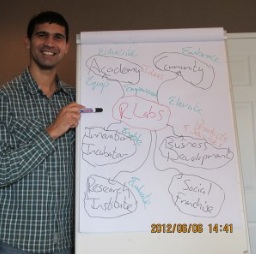 Marlon Parker, 34, is a South African who is making a mark as an entrepreneur. Holding a degree in Computer Science from Cape Peninsula University of Technology, he lives in an underprivileged neighborhood rife with youth drug use and gang culture.

Parker wanted to help them, using the tools he had. He took a group and taught them how they can use digital technologies to tell their stories. The results impressed the kids’ parents, who came in to learn to tell their own stories. And after that came the grandparents and younger siblings.

But Parker only trained the initial group of 14 kids. They did the rest, training all the others. And so on down the line, to where they’ve helped over 6,000 people learn how to tell their stories on the web. And how to help each other.

To organize all this, Parker created Rlabs – the “R” stands for “reconstruction” – a non-profit organization whose goal is to “rebuild communities,” Parker says, to introduce “social revolution through innovation.”

As they gained experience, the young and not-so-young started tackling other problems. Their response: creating a social incubator.

“We realized that we needed to generate revenue, so we’re trying to turn drug dealers into social entrepreneurs,” Parker says. One of the projects is helping people with drug problems who are seeking help, using mobile phones and without needing to mobilize hundreds of people.

To do this, they created an instant-messaging service, creating direct communication between help-seekers and councilors. The service now handles 300 of these conversations per hour. The group named the technology Jamiix, a contraction of “Jamiia” (“community” in Swahili) and “exchange.”

The technology can be refashioned to sell to other organizations: groups working with AIDS victims, and university call centers, as well as to telecoms, who use it for community management. Its live-chat feature is used by Mxit, Africa’s largest social network. It is used in Indonesia as a natural-disaster response system

Jamiiix is now one of the products in a holding company that Parker is president of,  Movigotech. The company has a presence in South Africa, Malaysia, Finland and Great Britain. It has also developed a cartographic app that shows points of interests via mobile phones.

It is a product, a business and a movement born from the need to help those who needed a new form of aid.

Marlon Parker is an entrepreneur, but contrary to what one might expect, he did not become one the day he started to get paid for his services. He has been one since the day he used his skills and gathered the resources necessary to respond to the needs of 14 poor youths, to give them the means to change their lives and world.

Nearly a century later, the Austrian Joseph Schumpeter gave a new dimension to the term by adding that the entrepreneur must have sufficient energy to “disrupt the routine and make innovations”.

Little by little, the word came to mean the ability to seize opportunities, the willingness to take risks, and to build something without being afraid to fail.

In the course of my travels, as I interview more and more people, I started to define “entrepreneur” as someone who sees opportunities, gathers resources (human, technical and financial) and takes risks to create their dream.

In an article written to launch “Startup Month” 2012, Forbes’ ex-editor in chief, Brett Nelson writes, “Entrepreneurs, in the purest sense, are those who identify a need — any need — and fill it. It’s a primordial urge, independent of product, service, industry or market.”

Nelson, who at Forbes for 14 years, distinguishes entrepreneurs from managers and investors, in the same way we should learn to distinguish between start-ups, who innovate in order to exist, and corporations, who manage in order to maintain.

Innovation, from what I’ve seen from my travels, is always the result of an improbable assemblage of elements (not all of them new) to solve a problem, meet a need and opportunity in a given space. This is the definition I see most often. The desire to solve a problem includes, generally, a social dimension. The desire to seize an opportunity can result from a political vision or a perceived need for change.

To this I should add that I’m finding three categories of entrepreneurs pretty much everywhere. Business entrepreneurs think exclusively, or mainly, about making money. Social entrepreneurs are becoming more and more numerous and recognized. The definitions vary. The most all-encompassing is that they have a social goal and can monetize themselves.

I add a third category. One that is no less important, but one that is generally not accounted for: activist entrepreneurs;: those who gather people and resources to confront social problems and change the world, for little or no profit.

Four characteristics of an adaptive marketing organization
Show all