I got emailed  a question asking if I could blog on the more mundane but very important topic of what an average IT shop should do today around the ‘evolution’ of its existing IT. The challenge of new technology and the disruptive change it brings, together with the needs to understand and plan, or even try to gain control of end-users implementations were fully accepted But right now, the pressing question is for a sensible road map for the next year or so around what the IT department would be tasked to deliver to the business.

I do get this point very much and have this mapped out as 4 headings:

In fact I should point out that the 4 headings were first identified by Ray Wang of Constellation Consulting slightly more than a year ago, but I can’t find this particular blog post so I will just have to recommend Ray’s Insider Blog as worth reading instead. I have extended these headings into a full set of nine steps for each, but before detailing this, it would be good to compare what various surveys of business and IT say what the issues for 2012 are.

Frankly it’s difficult to know what to make of these changes except to point out the obvious around infrastructure and cost management. Plus that everyone wants more business intelligence, and the hype of business making new demands each year around social tools and mobile as part of the new wave of technologies. Having started this, I guess I better complete the picture by providing the same survey priorities but for business managers. Interestingly, the business goals have stayed the same for the last two years and are firmly connected to front office and external uses of technology – the disruptive element.

Not a bad justification for where and why for the focus of my blog but what to make of this for an IT shop challenged with the normality of its operating role?

Frankly it can only be about building a strong foundation to deliver what is required today and to embrace the increasing shift towards standardization to allow as much flexibility in the future as possible. In other words, clouds were described as SaaS, IaaS or PaaS; all examples of using the technology as a cost reducing mechanism for current IT rather than as part of the web-based services disruption, BUT is also dependant on using standardization as much as possible too!

So coming back to the 4 themes: why Infrastructure, Integration, intelligence, and Innovation? Because back in the end of 2010 they were right to support the direction of IT, and in 2012 they are still representative of the basic building blocks to get right. And given such a turbulent period, there was pretty good reason and recommendation to use these as the stable building blocks to work on.

So here you have the roadmap.

A Roadmap for an IT Shop’s evolution 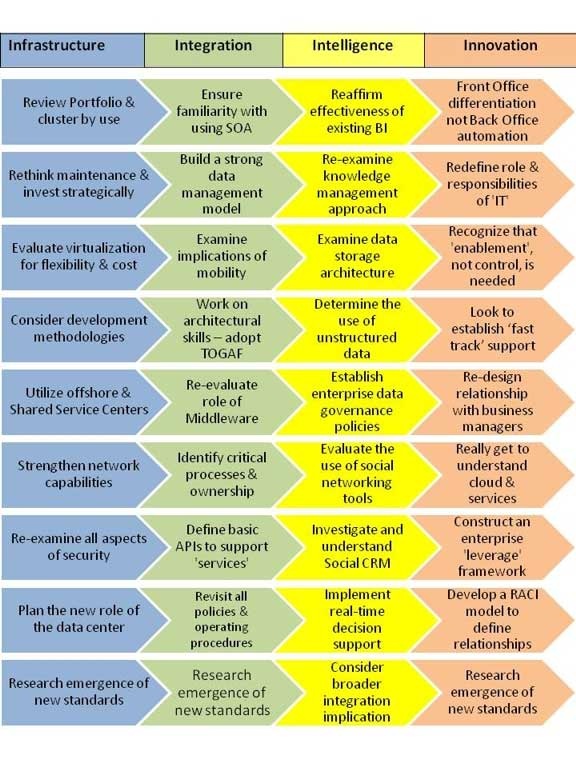 Skilling your workforce for what’s next
Financial Services