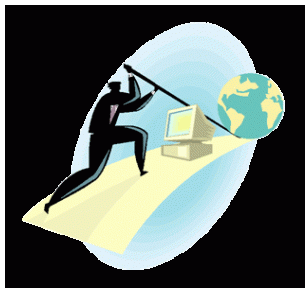 The first steps of my world tour of ICT and innovation helped me realize that geeks, entrepreneurs (social or not) and activists often gather in communal spaces, and that they have multiple things in common.

The raison d’être for these collaborations/relationships in the places I’ve visited so far can be partly explained by their country’s level of development. To generalize, people in these countries attend the same conferences and frequent places where the bandwidth (and connection quality) is better than what they have at home. To this we must add that, in the south, an ambitious company cannot think only of itself. In order to prosper, it needs to help develop the infrastructure – which is always insufficient – and thus plays a social role.  As such, it is the bridge between people whose main goal is making money and those who fight against injustice and repression.

The question is to what extent these relationships exist in developed countries, where ICT penetration is deeper and markets more mature. Where working in a public or collective space isn’t a way to access better technologies than those available at home or the office. Where the infrastructure is generally a given, part of the landscape.

What you see in Africa and Beirut exists in many other places, perhaps more discreetly. Co-working spaces have first appeared in San Francisco and Boston-Cambridge. They’re multiplying in Paris, London, Berlin and Madrid. Geeks, entrepreneurs and activists connect at conferences – each one offering its own proportional mix of technology/business/social action – as I have been able to witness in Europe (Lift, LeWeb, Netexplorateurs) and the United States (Fire, SciFoo, Supernova).

More significantly still, you find them gathered around the same causes: SOPA, PIPA, HADOPI and the Sinde Law, to name a few.
The collaborations between geeks, entrepreneurs and activists in the most developed countries are different that those I saw in Africa, but are equally valuable.

They occur between individuals and groups (enterprises, institutions and networks) who have decided to use ICT to shatter the status quo and promote their own causes, whether individual or collective. The tension between these groups and those who want to reduce – or refuse – the changes made possible by IT seems as meaningful as the one between opposing politics and ideologies.

The wager made by Archimedes’ children is that one of the best ways to budge the world today is through a total dedication to innovation, disruptive technologies, and the participation of what I call webactors.

After answering the question: are you one of them?

Becoming a game-changing product of your environment

How a product-based DevOps approach can radically transform your business

Becoming a game-changing product of your environment
Show all