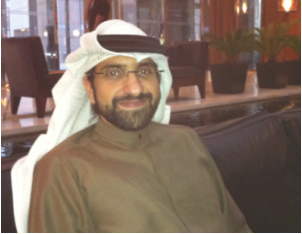 100,000 followers and 27,000 tweets make Sultan Al-Qassemi (@sultanalqassemi) one of the most influential tweeters in the Arab world. A native of the Emirates, he enjoys a great freedom of expression and, more importantly, uses it in service of democratic movements. His columns appear in The New York Times, the Financial Times, The Guardian, and others.

We pass quickly to the inevitable question: the role  played by social media in the Middle East insurrections. A generalized anger, the frustration of young people too often condemned to joblessness. “The uprisings were inevitable,” he said. “They might have happened later, but they still would have happened.”

A privileged witness who was on the ground in the countries involved, and knows activists everywhere, Al-Qassemi adds: “Social media plays different roles depending on the country. Since they’re tech savvy, people in Cairo naturally use them, but people from the interior of the country took part through word-of-mouth.” In Tunisia, on the other hand, when dictator Ben Ali blocked the internet, elites used their Blackberries, which functioned normally.

The Saudi women’s driving movement ,”which was an integral part of the Arab uprisings, worked because women identified police control points with hashtags. This is why only two or three were arrested.”

And it wasn’t all newcomers. The “longest-running experiment in socia-media usage” is in Bahrain, started by clandestine blogger  Ali Abdulemem  in 1998.

In sum: “The collective desire for change was a determining factor. Social media helped people assemble, share information and, perhaps, comfort each other.”

The first, put in place by Yamli.com— which lets users write in Arabic on a Latin keyboard, and search for Arab-language content by adding Latin approximations – lets people translate messages written in Arabic into several languages, which lets them be broadcast globally.

Created in Egypt by local teams, @speak2tweet changes spoken messages sent by phone into tweets. It was built in less than a week by Google and Twitter engineers, in order to get around Mubarak’s internet blackout.

Al-Qassemi himself found a way to distribute political pamphlets in real-time by taking a photo of them that he then tweeted, allowing his tens-of-thousands of followers to pass them around their own networks.

But the most fascinating thing about this geek-entrepreneur, head of Barjeel Securities ,whose education (including 4 years in Paris) has taught him the secrets of finance – he never invests in IT companies.
“As an investor, I never touch it,” he said. “These are’t tangible products. Today, Yahoo is dying; tomorrow, it’ll be Google. Someone in China or Vietnam could create something totally game-changing. I invest in the real and concrete, never in IT.”
This is the attitude of most investors in the Emirates.
But, contrary to those who don’t invest in local innovation, but do invest in Silicon Valley companies, Al-Qassemi said of Facebook’s entry onto the stock market: “I wouldn’t touch it with a ten-foot pole.”
What do you think?

As telcos push forward in the New Normal, into the world of 5G and beyond, they’ll keep...

In this POV we discuss how more modern data gathering and analysis solutions can provide...

Supply chain resilience – preparing for a frictionless future
Show all