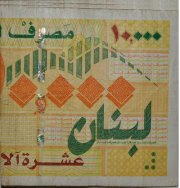 What do you do when you’re three young Lebanese convinced that your city’s streets are being disfigured by people throwing garbage anywhere they want?

Today: Make a Facebook page. And when you see that it’s gained a thousand fans in a few hours, take action.

This is what Nadine Razzouk (22), Lama Shehadeh (21) et Mohamed Olaym (22), graphic design students at the American University of Beirut, did.

What they did is particularly original: replacing no-longer effective flyers with fake 10,000 Pound (about 5€) notes printed on one side. The other side read: “Just like you picked this up, you can pick up trash in the street.”

The students placed a thousand of these faux-bills on Hamra Street, located in a trendy and dynamic neighborhood popular with startups and coworking spaces.

The bills were gone in 10 minutes. This was last month … their Facebook page, Metel ma shelta (Just like you picked this up), is now nearing 5000 fans.

They started getting inquiries from outside Beirut, both from other cities in Lebanon – in which case all that was required was sending the flyer – but also from other Arab countries, where the process had to be explained.

When do you stop a campaign like this? “When the government or someone with more resources than we have takes control of this,” the say. “Not in a month or two; maybe never.”

The campaign has been so successful that “we realized that we could do other things on the same model.” The next step could be for women’s rights, “with the same spirit of interactivity,” they add.

Razzouk, Shehadeh and Olaym’s innovation goes further than just an ironized flier. Like many other people around the world, they’re creating new forms of positive protest, local and immediate.

PS — Here’s a video (in Arabic) that shows how the group distributed their novel fliers.

I want to use my ten years of experience to help lift women so they can reach their career...

Acing the returns flow: how to balance costs and value in the last-mile of returned goods

The main challenges of companies that are dealing with the ever-increasing amount of returns...

Acing the returns flow: how to balance costs and value in the last-mile of returned goods
AI

AI4Good: How governments can leverage AI for society
Show all