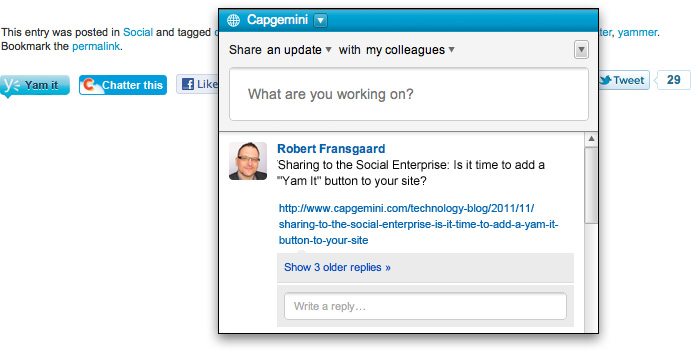 Since SalesForce’s annual conference DreamForce 2011 there’s been a lot of buzz around the Social Enterprise and rightly so. Social media is needed in a work environment to make the digital work surfaces relevant to employees who by now are used to being able to share with friends in their own time; why shouldn’t they be able to share as easily with colleagues duringh work hours?

But the Social Enterprise is not an isolated entity. It will become part of our private lives as much as Facebook is part of work life (whether employers want it or not). And it is a good thing as it blurs the boundaries between work and private and becomes a single entity: Life, which I’ve covered in a previous article.

Yammer is one social enterprise solution which have opened up the door to the rest of the social sphere for example with the ability for employees to connect their personal Twitter account to their corporate Yammer account allowing them to share useful information both to their Twitter followers as well as to the internal corporate Yammer network without duplicating effort.

And Yammer even goes further by having an API that allows users to share public facing content to their Yammer network. But Yammer leaves it in the hands of the users to actively decide whether they want to make use of such feature and install the bookmarklet in the link… If you are a Yammer user and knew of this bookmarklet raise your hand now… I thought not.

My gut-feel tells me that buttons sharing to the social enterprise sphere would be well received especially by B2B website managers.

If you are a Yammer user try sharing this article with this home-made “Yam It” button:

What are your thoughts on sharing to the Social Enterprise?