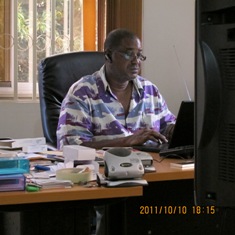 Herman Chinery-Hesse was described to me as “the African Bill Gates,” but what he’s launching is more like the continent’s eBay. He lacks the Microsoft founder’s fortune and power, but he did launch a software company serving SME’s in Ghana, where he lives, as well as other African countries, over twenty years ago.

The comparison with Gates is misleading. Open and warm, Chinery-Hesse has a true vision of what he wants to do for his country and for his continent.

It starts with ShopAfrica53, a sort of online mall that he recently launched. The goal is to “act as the intermediary to small African companies,” Chinery-Hesse told me in his veranda. It’s his second giant adventure.

SoftTribe, which he founded after returning from the United States and Great Britain, provides software to companies in several African nations, and today generates “millions of dollars.” But Chinery-Hesse hopes for better. He wants to contribute to the development of the continent, through entrepreneurship and innovation, which is the reason he decided to launch ShopAfrica53.

“We target the base of the pyramid, and our margins are significantly reduced,” he said. “SMS and email don’t have borders.” He recognizes that it will take a certain amount of time for his project to make it’s mark, perhaps up to five years. “But it will be huge. It will be more effective than anything outside aid could do in five years. I don’t know any country that developed thanks to aid. It’s a false path. We will do it better; what’s more, we’ll do it with dignity.”

Going back to my notes for this post (this is part of a long article published in Spanish this week in Madrid’s El País[Article in Spanish]), I wondered if it was really “the base of the pyramid” – a very popular term right now – that he was aiming for. I tend to think that a more intelligent strategy is to aim for the middle of the pyramid – more intelligent for entrepreneurs, at least.

I’m curious to find out what you think about this.

How to approach carbon offsetting on your path to net zero

Over the past couple of years, and even more noticeably since the beginning of the global...

Why is a renewable energy sourcing strategy essential on your path towards net zero?

It is time for corporates to accelerate their uptake of renewable energy sources.

Why is a renewable energy sourcing strategy essential on your path towards net zero?
Capgemini Invent